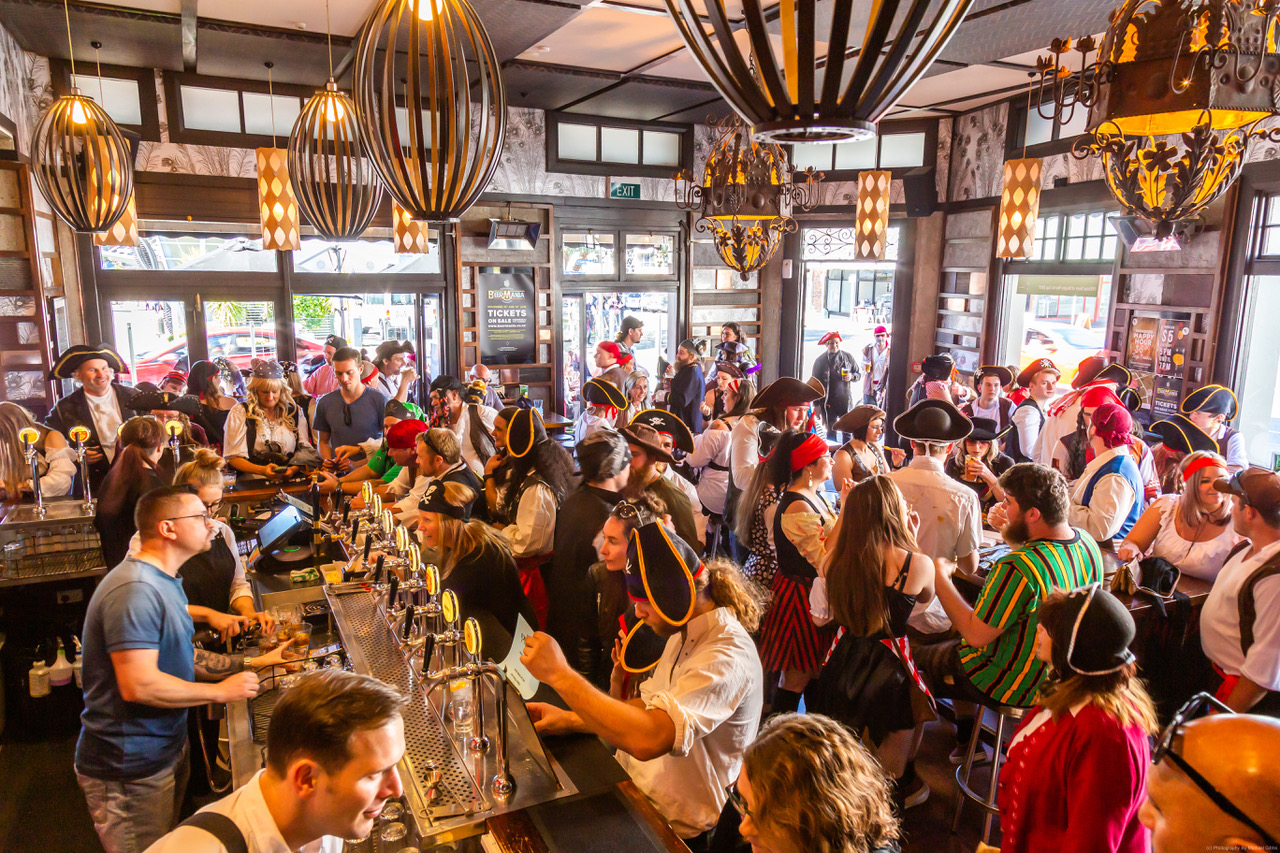 The original brief was simple enough; attend a pirate pub crawl, infiltrate their ranks, study their habits, ask them questions.

First, I had to dress like a pirate; old boots and trousers, a drinking shirt and a stripy rag tied around my head. Upon arrival at Crowded House at 11:45am on a beautifully sunny Sunday morning, among the one hundred pirates already gathered at Crowded House in New Plymouth, I looked like a complete newbie. Hats, wigs, high-heeled boots, corsets, plastic guns, cardboard swords and even a few fake scars. These guys were into dressing like a pirate in a big way.

Yes, this was the fifteenth annual Pirate Pub Crawl, held in conjunction with Talk Like a Pirate Day and already, this was shaping up to be the biggest one yet. One of the five people responsible for it all, Steve Ngapo, is off in a quiet corner momentarily entertaining his young daughter, who is dressed as Owlette from PJ Masks, as she didn’t want to dress like a pirate.

“I started this off with a few mates for a bit of a laugh and it’s just grown and grown to what it is today,” explains Steve Ngapo. “I used to know everyone, but not anymore. It’s just taken on a life of its own.” In fact, Steve admitted that some people he only knew as pirates. “I wouldn’t recognise them in real life.”

“The first time people come along, they might not be too sure about what to wear,” explains fellow committed pirate, Amanda, “so maybe they chuck on a hat and grab a sword, but then they come along and see what other people who may be on their third, fourth, fifth event are wearing and they’ll come back the next year fully kitted out.”

Next it’s down to The Good Home. Not only do pirates love getting dressed up and drinking some good rum, they also love a good story and by far one of the oddest stories I was told on the day was that a shipload of horses stolen from a Spanish ship by pirates ended up in the sea when the boat sank. The horses swam ashore and that’s how we now have wild horses in New Zealand. I liked this story so much, I didn’t bother checking if it was true.

Onwards to Frederic’s to discover some more drinks specials and just when I was thinking, “A plate full of chips would go down well now,” a plate of chips magically appeared in front of me, as free bar snacks were supplied by strategically-positioned pubs along the way. There were a lot of rum specials that are so eagerly taken up, one pub on the day runs out of rum.

“It’s alright, we’ve got plenty of whisky,” says a voice from behind the bar.

Being as I am a lone pirate, by the time we get to Ms White’s, I’ve met people from all over the place; Hawera, Stratford, Frankleigh Park, Tauranga and Cromwell. Yes, Cromwell, that land-locked shire of the deepest deep south of the south. Word of the pirate gathering had reached the good people of Cromwell and they had responded by getting on a plane and flying north to take part. I corner them at a table at Our Place.

“I actually came here last year and I loved it,” explains Hilary, by far, the furthest-travelled pirate of the day, “and so this year, I dragged along my boyfriend Jimmy and we also got another couple of friends to join us, Alex from Tauranga and Rhys from Auckland, (via Wales). They all came here on my recommendation that this was a good time.”

Legend has it that in all of the fifteen years that the New Plymouth Pirate Pub Crawl has been running, there has not ever been a dark and stormy night, with all pirates being well-behaved and happy, if a little loud at times.

“The only incident I’ve heard about was a bloke last year who when told he couldn’t take his glass of beer to the next pub, he dropped it on the floor,” says Hilary. “He was instantly surrounded by pirates who made him clean it up.”

Walking along the street headed for Lone Star, I realise that I can hear a pleasant sea shanty emanating from the bloke walking in front of me. That bloke is Josh Mclean, official Shanty Master of the pub crawl.

“This is my fifth year bringing along pirate tunes for the day and every year I’ve had to get a bigger speaker.”

Josh now carries a serious speaker in a backpack cleverly disguised to look like an old-time pirate’s sack of swag. He also carries a small accordion to play “What Shall We Do With The Drunken Sailor?” which is the only song he knows.

“I like to dress the speaker up. Last year, I had a speaker in a treasure chest, which became annoying, because when you’re surrounded by pirates, everyone wants to see what’s in your chest.” Josh looks forward to the crawl every year now and says that in his flat, “It’s bigger than Christmas.”

King of the pirates was Captain Kiwi, complete with a toy kiwi called Barret on his left shoulder. By the time we get to Decanta he tells me, “Normally I have to get the pirate games out about now, to keep the party spirit going, but there’s no need this year, because everyone’s socialising so well. This is probably the best year yet.”

By the time we get to Peggy Gordon’s, I meet Steve on the way back from the bar. “Wow, you’re still here, I can’t believe it! Normally when a writer comes along, they visit one pub and then they’re gone.” Not me, I like to fully immerse myself, (although Live’s bi-monthly publications dates usually make for some pretty loose deadlines).

However, even pirates need to know when to quit and at the Mayfair, I quietly leave and sail off into the night, the black and inky sea claiming yet another landlubber into the pirate way of life.