The Wall of Wood 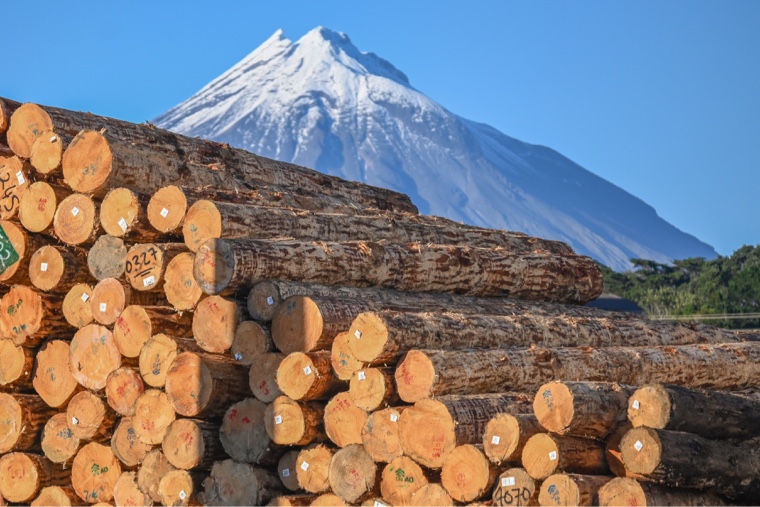 A forestry boom in the 1990s has led to the industry hitting peak capacity in the last few years. Contractors, truckers, exporters and everyone else in the sector have been stretched like never before trying to deal with all the trees that were planted back then now reaching maturity.

When NZ Forestry director Cam Eyre moved to Taranaki in 2014, he recalls the region producing around 200,000 tonnes of wood that year. Now, he says Taranaki produces up to 1.2 million tonnes each year.

It’s known in the forestry industry as the Wall of Wood, which has created huge challenges, but also huge opportunities, for those at all levels of the sector.

It started when forestry prices spiked in 1993, which prompted private forestry planting like never before. Never mind the fact that a payday was 25-30 years away — people saw the potential for lucrative returns and jumped on it.

Those trees have now matured, and the first wave of them started to be cut down in around 2017. Across Taranaki, Eyre says the whole industry has been near capacity ever since.

Investors generally have a window of around 10-15 years when they can cut down their mature trees, Eyre says, so they can time harvesting for when prices are high.

The fact that prices are high at a time where we’ve got more supply than ever means that we’re not just dealing with a Wall of Wood, but a Wall of Investors who’ve been waiting to cash in their wood chips for three decades.

Figures from the Ministry for Primary Industries show that in 2019, a record 35.9 million cubic metres of trees were harvested from New Zealand forests. That was only slightly up from the previous record, set the year prior.

The last financial year has seen more wood exported through Port Taranaki than ever, says its head of commercial, Ross Dingle.

The port exported more than 1 million Japanese Agricultural Standard tonnes (or JAS, which is the standardised industry measurement) in a financial year for the first time. Its final annual figure of 1.1m JAS was a huge 41.7 percent increase on the year prior.

Anyone driving past Port Taranaki recently will have seen The Wall of Wood quite literally, with large stockpiles waiting to be shipped.

Eyre says the market peaked around 2019 and is slowly on the way down again, but it’s still “red hot”. A lot of that comes down to the demand from China, which is where around 90% of Taranaki’s logs are exported to.

“If China sneezes, we get the flu,” he says.

That influence was especially notable during the early part of 2020, as the Covid-19 pandemic hit.

China’s shutdown saw their demand fall away dramatically. Forestry isn’t considered an essential industry in New Zealand, and as a result forestry production earnings during the 2020 lockdown were nearly 40% down on the same period in 2019.

During that time, China was getting back to normal, and since restrictions eased here, the industry has been flat out trying to meet China’s insatiable appetite for wood. The August 2021 lockdown was a brief pause for the industry, but didn’t have any real effect on the market.

China traditionally gets its supply of logs from Europe, Australia, the U.S., South America and New Zealand, but a unique combination of factors means New Zealand is essentially the only main supplier left standing.

Political tensions have seen China suspend all timber imports from Australia. The supply from Europe all comes in containers, and there’s a global shortage of empty containers.

A domestic construction boom in the United States means they have very little excess wood to export, and the shipping costs of getting logs from South America is higher than from New Zealand.

“We supply wood like the Saudi Arabians produce oil,” Eyre says. “The transport costs between here and China are the cheapest they can get.”

It’s currently so busy that if an investor were to call him today wanting to cut down their trees, Eyre expects it would take up to two years before he’d be able to arrange for it to happen. Usually, it would be closer to one year.

“Since we came out of lockdown last year, it’s gone absolutely crazy. We’re at capacity now — there are no spare loggers, no spare truckers…until we train more people, this is the limit of what we can produce.”

It’s a similar story for one of Taranaki’s largest forestry contracting firms, G.J. Sole. Both its transport and logging businesses have picked up substantially in the last 12 months, says Logging Administrator Mary Rail.

“This peak has been huge,” she says.

“Trying to find enough fully qualified drivers to employ has been so difficult. Over the last year and a half we’ve acquired eight new logging trucks, and we would still have enough work even if we acquired ten more.”

While having more people and improved infrastructure right now would increase the capacity, the industry is cyclical, and those resources could be surplus to demand in quieter times.

However, this busy period has already lasted much longer than usual, and Rail expects it to continue.

“The overseas markets are chasing New Zealand wood, and we’ve also seen huge increases in the quantity of wood supply for both TaranakiPine and Value Timber Sawmills in Taranaki. While that demand is there we’ll have to continue with the supply, so for the foreseeable future, we can’t see things slowing down.”

That doesn’t mean that a slow down isn’t expected at some point, and industry players do their best to keep things in check.

“This is like a $9 dairy payout for us, but you also know $4 is coming,” Eyre says. “You try to grow organically and improve your local capacity because we’re the ones who’ll still be here when the price is low. It won’t always be like this.”

Eyre says people in the forestry industry are used to balancing its peaks and troughs, and any investment typically comes in busy times.

Port Taranaki is a good example of this, upgrading a range of its facilities in the last few years to better manage the increase in log trade.

Ross Dingle says Blyde Wharf has been redeveloped to become a storage space for around 46,000 JAS of logs, and enable two vessels to berth and load simultaneously.

The port has also installed an on-port log debarker, which is owned by China Forestry Group New Zealand. Dingle says it’s the only such debarker in the lower North Island, and it’s played a significant role in growing the port’s capacity.

Previously, logs that were exported through Port Taranaki needed to be fumigated on board ships, as the port doesn’t fumigate them beforehand. This means logs could only be exported in the hold of vessels, where they could be fumigated.

However, an alternative pest control method is to debark the logs. Doing this at the port allows ships to transport logs above deck as well as below.

This means the port can process more logs, and more ships have come through Taranaki as a result. Sixty vessels exported logs through Port Taranaki in the last financial year — up from 50 the year before — and, on average, they took more logs too.

Meanwhile, stormwater systems have been upgraded to prevent debris from entering the harbour. A rail service that’s been operating since 2019 can also take daily deliveries from Whanganui, increasing capacity and reducing the impact of logging trucks on the roads.

Dingle says the rail service can take the equivalent of six logging trucks, and the port is working with KiwiRail to increase this service even more.

“We’re very proud of how we have worked with forest owners, exporters, marshallers, and transport companies to meet their needs and support the rapid growth of the log trade,” Dingle says.

It’s expected most of the remaining trees from the Wall of Wood will be cut down in the next 3-5 years, at which point the industry will return to a less dramatic flow of ups and downs.

However, the cutting down of trees is only one part of the process. Part of what’s making things so busy for forestry workers at the moment is investors who’ve just had a good return lining up to go another round.

Add to that the government’s plan to plant 1 billion trees across New Zealand before 2028, and Cam Eyre says the result is yet another backlog. This time it’s people wanting to put trees in the ground.

“The way things are shaping up, if you call me in November wanting to plant trees next winter, the answer’s going to be ‘maybe’,” he says.

Eyre’s company has helped to plant 850 hectares of forestry in Taranaki in the last 12 months, compared to 300 hectares in a “normal” year.

It’s essentially the same situation that led to the Wall of Wood in the 1990’s, and Taranaki could be affected by the next wave even more.

The region is becoming an increasingly popular place for forestry, Eyre says, particularly among early-adopting farmers looking to diversify income streams and earn carbon credits to offset those produced by farming.

Ross Dingle says Port Taranaki expects log export volumes to continue to grow in the medium term, and it’ll manage that increase the same way it has managed the last few years.

“We’ve maintained open communication with our customers to ensure we provide the facilities and services they require to maximise their trade, and this will not change in the future,” he says.

So are we looking at having another Wall of Wood in 25 years’ time?

“Definitely,” according to Eyre.

“The only way to fix that is to plant consistently for the next 15 years. We want the government not just to throw a billion trees in the ground as fast as they can.

“If they elongate the process, that means the gap that’s coming for us won’t be there for our kids. It’ll mean the industry can rely on a steady stream of wood, instead of peaks and troughs. That will always happen to some degree, but if we can flatten that curve it’ll be much more reliable and sustainable.

“It also means wood processors can commit to capital projects and keep processing in New Zealand.”

He’s not confident that’ll happen though. In fact, Eyre can see the writing on the wall already.

“We’ll plant trees as fast as we can now, and when I’m 60 our kids will face the same supply chain issues with not enough logging crews, not enough trucks, and all that stuff.”