The Running of The Bulls 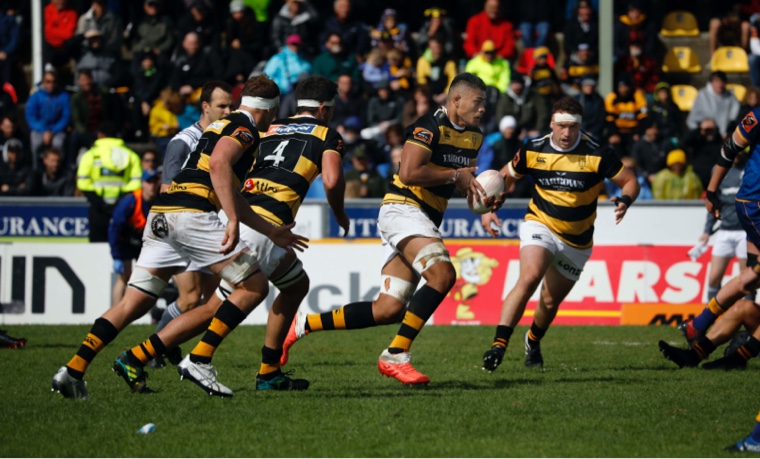 Still a year away from a ‘true’ home game back at Yarrow Stadium, the Yarrows Taranaki.

Bulls will break out their 2021 season at home with a historic match at New Plymouth’s Pukekura Park.

The moving boxes might have been emptied, the portable cabins trucked from the racecourse to Westown’s Maratahu St but home still does not really resemble home for Taranaki Rugby.

Yarrow Stadium remains very much a work in progress.

There’s a temporary road running through the middle of the old No 2 field, a ground that has also become a resting place for thousands of yellow bucket seats that not so long ago were bolted in precise rows on the east and west stands of the region’s biggest stadium.

Step outside the Sport Taranaki HQ, where the rugby union’s community and commercial team now reside, and it’s easy to lose concentration from any conversation as cranes and other heavy machinery pull apart the metal skeleton of the stadium where thousands of fans once sat to enjoy our national game.

Despite the longing of things past, and the yearning for more positive things in the future, Taranaki Rugby continue to operate the best they can, confronting the myriad of challenges past and present.

Optimism is not a commodity short for those who wear the TRFU logo on their work attire.

A new but familiar face has taken up the reins of head coach, with Neil Barnes having moved home permanently after a six-year stint as an assistant coach at the Chiefs.

With a rugby CV that starts with numerous club titles at New Plymouth Old Boys and includes provincial, Super Rugby and international experience, there is no doubt Barnes is qualified for the job.

He’s also got a close affiliation with the squad he is now in charge of, having worked as assistant to Willie Rickards in 2020, and previously done the same job with former Taranaki coaches Kieran Crowley and Adrian Kennedy, before accepting an offer to step up this season.

Barnes is a no-nonsense, straight-talking individual who is equally happy pulling on a set of overalls and his Red Bands as he is putting together a coaching strategy to face the next opponent.

“I’ve got a passion for this place and this job gives me balance. I can come and do the rugby and I can go back to the farm and do some jobs which helps me be a better person,” he says.

Overall, the last few years have not been kind to Taranaki Rugby, on and off the field. While there have been a splattering of notable performances, the Yarrows Taranaki Bulls still find themselves in the Championship division of the Bunnings NPC.

It’s a steep drop from where they were just seven years prior when they sat on top of the provincial rugby pecking order.

Getting themselves back into the Premiership division now sits on top of Barnes’ priority list.

So what makes him think they can do it?

“I’m not about to make comparisons between me and those before me but my players know that I’m pretty straight. I don’t give people flowery speeches.

There are several pillars Barnes puts in place when he starts to map out what he wants from his players in 2021 and they include working really hard and bringing a level of consistency that will make the Yarrows Taranaki Bulls’ fans proud.

“He’s direct, straight and you know where you stand with him,” the former Bulls hooker says. “When you need a hard wake up call, you’ll get one from him but there is never any grudge afterwards and that’s what the players respect.”

“Jarrad is very intelligent, he brings a lot of detail and he’s there for his players, he’s loyal to them but he’s got those qualities that allow him to be direct with them, too,” Barnes says.

“You can’t have a good working relationship with your players if you’re not close to them. When I went through the early years of my coaching classes we were encouraged to have a gap with the players but I think that’s a crock. If you know your men, know their families, know what’s going on in their lives you can understand them.”

Weston’s inclusion in the coaching group might have raised a few eyebrows but Barnes is excited about working with the former New Plymouth Boys’ High School teacher.

“He’s the balance for me and I’m very aware I’m not the most organised person at times and that’s doesn’t work when you’re dealing with 40-odd people around you.

“Johnny’s a teacher, he’s organised, he’s a passionate man who understands the game and he’s really good at what he does. I invited Johnny around to my place to talk rugby. I thought it would take half an hour but we talked code for three and a half hours — I knew I had the right person.”

The coaching staff are, of course, just part of the equation. Does Barnes think he has a playing squad capable of lifting or winning the Championship and earning promotion?

“I want to make Taranaki proud. If you want to make your province proud, the easiest way is to win and I want to win, I want our province to be involved with us and we have tried to show a lot of respect to the clubs to make that happen.

“And I’m absolutely rapt with the squad we have and the fact we have players who have come back to our province. I’m genuinely excited, we’ve got a good balance in the squad, some young backs and some real pace and excitement while there is enough in the forward pack to do a damn good job. I expect that pack to be dominant.”

Versatile forward Mitch Brown and midfielder Teihorangi Walden will co-captain the squad which kicks off its campaign with a highly anticipated match at Pukekura Park against Hawke’s Bay — 76 years after Taranaki last played there.

“The decision to play at Pukekura Park has been a massive shot in the arm for us and it’s going to be an iconic day for everyone involved,” Taranaki Rugby commercial manager Jimmy Fastier says.

“We’ve got a lot of support from our commercial partners and it’s had a big impact on our membership numbers which have gone ballistic. We’re really thankful to the New Plymouth District Council for helping us make the game happen while we’re equally thankful for the people involved with the TET Stadium & Events Centre who continue to support us.”

Meanwhile, this year the Farah Palmer Cup will be split into a Premiership and Championship, with the Toi Foundation Taranaki Whio in the Championship alongside Manawatu, Tasman, North Harbour, Northland and Hawke’s Bay.

Their season kicked off on Saturday July 24 with an away match against Manawatu while their opening home match was against Tasman at the TET Stadium & Events Centre in Inglewood on Saturday July 31.

Fabulous Fortnight to be celebrated at Pukekura Park

It has been 25 years since Yarrows Taranaki famous 42-39 Ranfurly Shield win over Auckland in 1996.

The tenure known as the ‘Fabulous Fortnight’ will be celebrated at the Yarrows Taranaki Bulls historic home match at Pukekura Park on Saturday, August 7 with the 1996 Yarrows Taranaki team invited to attend.

The can, filled with Taranaki’s beer Taranaki Amber, celebrates the Fabulous Fortnight and Yarrows the Bakers’ outstanding support of Taranaki Rugby dating back to 1992.

Fans will be able to purchase the limited edition Taranaki Amber can at the Pukekura Park match.