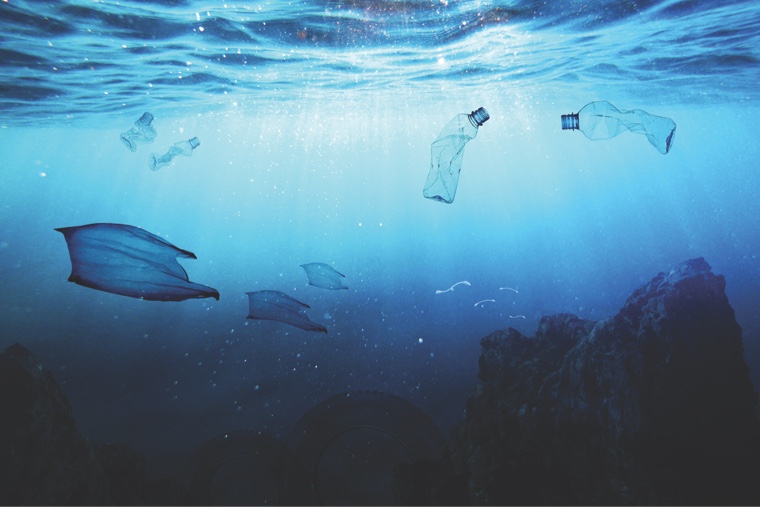 They are effective, convenient, cheap, versatile, light and durable and they are everywhere creating a new plague upon the planet — a plague of plastics that will not be eliminated for lifetimes.

To solve any problem, one has to understand the problem — and acknowledge that I am part of that problem.

Plastics are in just about all the products we buy and the packaging they come in. Small or big. For example, its estimated plastics now make up roughly 15% of a car by weight and about 50% of the Boeing Dreamliner.

The next thing is to be aware of the scale of the problem. According to the United Nations, “Humans have produced more than 8.3 billion tons of plastic since the 1950s, most of that is ending up in landfills and could take centuries to decompose”.

That’s about a tonne for every person on the planet. I first woke up to being part of the problem in the mid-1990s when I was living in Fiji on a sabbatical. I joined a local foreshore clean up day. It was shocking. Just an insurmountable amount of plastic bags caught up in the mangroves of this beautiful Pacific idyll. Every time anyone bought something in a Fijian store it was put in a plastic bag as a mark of convenience and service. 10 mins later it was thrown away — maybe into a rubbish bin but maybe not.

Today, an estimated 8 million tonnes of plastic enter the oceans every year with severe consequences. The World Wildlife Fund estimates 100,000 marine mammals die every year as a result of plastic pollution globally – either from ingestion or entanglement. This includes whales, dolphins, porpoises, seals and sea lions.

Go for a stroll on our beaches and you can’t miss the bits of plastics and other materials such as polystyrene caught up in the driftwood. You may think that’s not much compared to that vast ocean stretching out before you. But in that ocean there’s The Great Pacific garbage patch or the Pacific Trash Vortex. It’s located in the centre of North Pacific Ocean and it is an area of about 1,400,000 km² completely covered in marine debris particles. Mainly plastics. That is why it is also called the seventh continent, because it is larger than many countries.

You can see plastics lining our rural roads too, and beside train tracks (take a look over the bridge by Bunnings New Plymouth).

A spearhead in the rethinking of plastic is the Ellen McArthur Foundation which wrote a paper in 2017 called “The New Plastics Economy.”

The document pointed out that the use of plastics increased twenty-fold in the past half-century and is expected to double again in the next 20 years.

Another reality is that for a long time plastic pollution was never really recognised as a problem as all our “recycled” plastics were conveniently put on a ship and sent to China for decades. Then in 2018 China said it wasn’t going to be the world’s plastic dump. Right from that moment, no-one seemed to know what to do and there didn’t seem to be any solution despite the best intentions.

In 2013 the New Plymouth District Council decided to do something about recycling and set an ambitious target of Zero Waste by 2040. Councillor Richard Handley was and still is one of its champions.

“The kickback was that it was impossible,” remembers Handley. “But it was a vision. At the time Sweden claimed to be 98% zero waste which was the example we used.”

It was a great start. Back in 2013 some 52,000 tonnes of rubbish from our district was dumped at Colson Road. Today the total district waste to landfill has now decreased to 32,000 tonnes — an impressive 40 per cent reduction in seven years.

So we are recycling more, but here’s a reality check from The Ellen McArthur Foundation:

“More than 40 years after the launch of the first universal recycling symbol, only 14% of plastic packaging is collected for recycling.”

Addressing the source of this problem in the long term can only happen by changing the way we produce and use plastics, the Foundation says. The shift towards a circular economy in which plastics never become waste, while creating economic opportunities, seems to be an effective strategy for tackling the problem.

To do that, we need at least three things: innovation when it comes to product and packaging; better systems to deal with plastic and other wastes; and changing our attitude towards the use from a “linear” model we currently have for plastics — take, make, dispose — to a circular model of take, make and reuse to reach that elusive goal of Zero Waste.

It’s a better concept but not one that everyone finds realistic such as the President of Packaging New Zealand Association, Harry Burkhardt.

“The circular economy hasn’t been part of New Zealand infrastructure and that’s what we struggle with now,” says Burkhardt who runs Replas — a pioneering company that started producing products from recycled plastics in the mid-1990s.

“Zero Waste is a misnomer — there isn’t zero waste in ecology. There’s lots of opportunities because plastics are a fantastic product. People are the issue. There are levels of innovation that give us hope that we can live on Planet Earth without killing it.”

Central and local governments are tasked with promoting the “6 Rs”- rethink, refuse, reduce, reuse, recycle and replace. As consumers, we have a pivotal role to choose to deal with companies and buy products that are focussed on Zero Waste.

Locally, New Plymouth District Council continues to recycle Plastics 1, 2 and 5 which are all recycled within New Zealand. They used to send plastics 3, 4, 6 and 7 offshore to be recycled but this market no longer exists and every year around 15 tonnes is now sent to landfill.

“It’s not ideal,” concedes NPDC Manager Resource Recovery Kimberley Hope, “but at the same time this is only a very small amount — just 3 per cent — of all the recycling that goes into your yellow-topped recycling bin.”

NPDC is spending $21.5m on a number of initiatives to lift our recycling rates and cut down what goes to landfill.

Thousands of bins have diverted food waste from landfill and education is ongoing about what can and can’t go in the recycling bin.

The Junction Zero Waste Hub has been a big hit since it opened earlier in the year, educating people about Zero Waste and upcycling donated items.

“We’re also looking at how we can cut down waste from businesses with plans for a recycling facility for commercial waste,” says Kimberley. “Our residents are very much on board and support the Zero Waste journey but we know there’s still a long way to go.”

A lot of packaging comes from our weekly supermarket shop. In June 2018, both Countdown and New World signed on to the NZ Plastic Packaging Declaration — a New Zealand industry pledge towards using 100 per cent reusable, recyclable or compostable packaging in their own brands by 2025 or earlier.

In October this year Countdown started “soft plastics” collection in its Taranaki stores – following a national roll out. These plastics go to a company called Futurepost who recycle them into good ole fence posts — guaranteed to last 50 years — and after that you can bring them back for more recycling.

There have been radical innovations in packaging that are taking time to work their way into the product and packaging life cycle. You only have to look at the winners in the 2020 Packaging New Zealand awards.

The Gold award for the 2020 Packaging Innovation & Design of the Year in the Food Category went to Planet Protector Packaging for the Lobster Protector. The Lobster Protector is 100% certified food safe and is 100% recyclable and biodegradable, with the critical wool liner compostable (even home compostable). There are no plastic components in this solution.

And here’s one for the Taranaki surfing community – surfboards made from mushrooms! American company Ecovative Design has been trialling and “growing” boards from Mycelium — the branching, thread-like material that grows from fungi.

Mycelium can be grown and shaped into pretty much anything as an alternative to polystyrene which surfboard blanks are made from – along with all that protective packaging that comes with your new TV. The best part? It is 100% biodegradable. Once you break your board, or take out your new flat screen TV from the packaging, you could break up the material and put it on your garden because it is a nutrient — not a pollutant.

Want to Cut Your Waste?

Tips about how you can cut down on plastic can be found at https://www.newplymouthnz.com/Residents/Your-Property/Zero-Waste-Recycling-and-Rubbish/Your-Kerbside-Bin-Collection/Recycling-Guide.

Ideas include simple things like switching to cans of tomato sauce to refill your existing sauce bottle, or buying yoghurt in larger containers rather than single serve pots. When you are out, pick cardboard for your sushi rather than plastic or take your own reusable coffee cup to your favourite café instead of having a disposable takeaway cup.