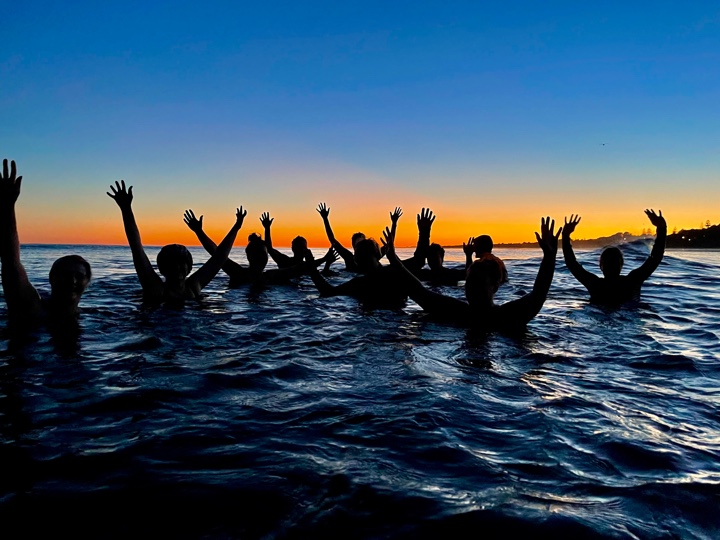 Most mornings we see them.

Around 7am, rain or shine, summer and winter.

Sometimes there’s only a few. Other times, there’s a dozen or more.

Silhouettes on East End Beach, making their way down to the water like lemmings, shedding brightly coloured towels and clothes into a communal heap on the sand.

We call them the Lady Dippers — and on particularly cold days they’re referred to as the “Crazy Ladies”.

For the past three years they have become as much a part of the daily rhythms of East End Beach as the sunrise, the dog walkers and the tides. It was time to enter their world and find out … why?

It’s a Sunday morning in early July, around 5 degrees, and there they are, standing outside Fitzroy Kiosk, already in their togs with towels wrapped round them, and a few jackets.

The weather is overcast, it’s wet underfoot and we’re not even on the beach yet.

Thirteen women wander down to the water, excited greetings turning into shrieks as they enter the water. One stays back with me, well wrapped up in our full winter clothing and puffer jackets, guardians of the towels. She’s recovering from laryngitis. I’m just being a wimp.

“It’s warmer in there than it is out here,” they proclaim. No-one is shivering … in fact they are beaming.

The swimmers get changed into warm clothes then the group heads upstairs to the room above the Kiosk. There’s now 17 women (a few arrived later than the others) and everyone falls into conversation.

It all started three years ago, when Fiona and Lisa went on a course.

“T talked a lot about how cold water dips can improve your nervous system and I realised I was constantly in the ‘fight or flight’ mode,” Lisa recalls of what made her want to try dipping herself in cold water in the first place.

“Cold water basically shocks your body and once you come out all your organs are reinvigorated. You feel this clarity of mind and your nervous system learns to regulate. It was just a way to try and slow myself down.”

Lisa wanted to do it again, but not on her own.

So she invited a few friends over for dinner, waited until they’d had a few drinks and convinced them to join her the following morning.

Amazingly, after the wines had worn off, everyone showed up.

Nicola remembers that first dip in August 2019 and inviting the group home with her afterwards for a hot drink. Her partner commented to her afterwards ‘It was like you’d all taken drugs’, she laughs. “We were all just giddy, talking non-stop, excited and laughing,” she remembers. “We were all on such a high.”

The cold water triggers the release of feel-good dopamine and serotonin for a mood-boosting effect.

You can also do a cold shower but she doesn’t find it as enjoyable.

“When you walk out of the sea you get that nice … it’s hard to explain … but nice clear feeling. It’s just the best feeling.”

A few of the group who live overlooking the beach report on conditions early each morning and the group don’t dip when conditions are unsafe.

Cold water dips don’t have to be done first thing in the morning to get the benefits either, which reputedly include improved circulation, easing menopausal symptoms, reducing anxiety and depression.

Fiona explains that one of the reasons why they dip early in the morning is that being out in the early morning light helps regulate your circadian rhythms, resulting in better sleep.

“And you just feel so good for the rest of the day,” adds Lisa.  “It’s actually kind of addictive.”

The scenery and sunrises are part of the attraction … as are the conversations that unfold in the water.

In the three years the group has been going they now boast 61 members on their Facebook page, but only about 20 – 25 would be regular dippers, reckons Caroline.

“I think the beauty of the group is that you come when you want to, so you’re not letting anyone down if you decide not to come.”

Some of the groups’ partners have asked if they can join them, but the answer is ‘no’.

“The women need to be comfortable and some of them wouldn’t be if they knew men might turn up,” one woman says, to general agreement.

“It’s given me heaps of confidence,” says Karla. “Like I would never get in the water and had never swum here until that first dip. The first Christmas (after starting dipping) I went camping with my kids and I was in the water all the time, whereas before I would always just sit on the beach because I was so self-conscious of the way I looked in my togs.”

One dipper says she had really sore joints before starting dipping.

“I used to wake in the morning and my fingers would almost crack they were so painful. I don’t have that any more.”

Another woman has seen her blood pressure reduce over the year she’s been dipping.

Others have noticed their circulation has improved and there’s general agreement that they just don’t get cold in winter any more and have improved overall health, rarely getting sick.

One who had Raynaud’s Syndrome (where fingers and toes will turn white with cold) no longer has it.

“My whole circulation has changed … now I love winter.”

Caroline says after a major operation, she felt tightness in her chest, just a constant feeling of anxiety. She seemed to be perpetually in ‘fight or flight’ mode.

The dipping has helped alleviate that.

Michelle says she used to go for a dip on her own and saw the group and joined them for the camaraderie and safety aspect.

“That mental wellbeing and connection with other women is just as important as the physical benefits,” she comments.

Currently the group range in age from 44 to early 60s, of all shaped and sizes,  but occasionally daughters will come too and they fondly recall a young woman in her 20s who joined them one morning.

No-one is offering comment on that beyond shrieks of laughter.

Anyone can join the group and they have several members now who had either heard about it, or saw them dipping and asked if they could come along.

“The more the merrier!”

By the time the chat has finished, the sun is hitting the water and I make the comment that now it looks a bit more inviting.

Jo and Leanne seize on those words and ask if I’d like to join them … they arrived later and haven’t been in yet.

We walk up to East End Beach and strip down to our togs.

The water as it hits my feet isn’t as cold as I thought it would be. But it is still cold.

There’s a sideways current that keeps us in relatively shallow water and we crouch down to get our shoulders under. I know from my chat with the group that the gasping and discomfort that ensues only lasts a minute or two. Soon I’m relaxed and laughing along with Jo and Leanne.

They talk of the benefits of seawater, as Jo checks her thermometer … the water is 15 degrees.

Rich in magnesium, seawater helps release stress and relax muscles. It contains an endless supply of minerals, vitamins, amino acids, trace elements and micro-organisms which have antibacterial effects plus iodine, which is important for healthy thyroid function and immunity.

There’s plenty of negative ions about this morning it seems … I am truly joyful!

The bubbling fizzing sensation of water on my skin is like bathing in champagne.

Jo is also the timekeeper and after ten minutes we emerge, grinning at the walkers on the beach wrapped up in their winter clothes.

Leanne drops me home for a hot shower, which I find when I start googling pros and cons of cold water immersion, isn’t the best thing to do (the sudden change in blood flow could cause you to pass out). Dressing warmly immediately afterwards, thawing out in a warm room, going for a walk and having a hot drink are much better ways of coaxing your body back to warmth.

As well as the inherent risks of getting into the sea, the obvious danger of cold water immersion is hypothermia.

Because cold water immersion affects your blood pressure, heart rate, and circulation, it can cause serious cardiac stress. There have been a number of deaths, both from cold exposure and heart attacks, during open water swim events.

However, the dippers tend to remain in shallow water and are not compounding the stress on their bodies with competitive swimming.

Walking into the sea is also a much better idea than jumping off a jetty into cold water.

People are generally advised to consult their doctor before trying it.