The Health Impact of Lockdown 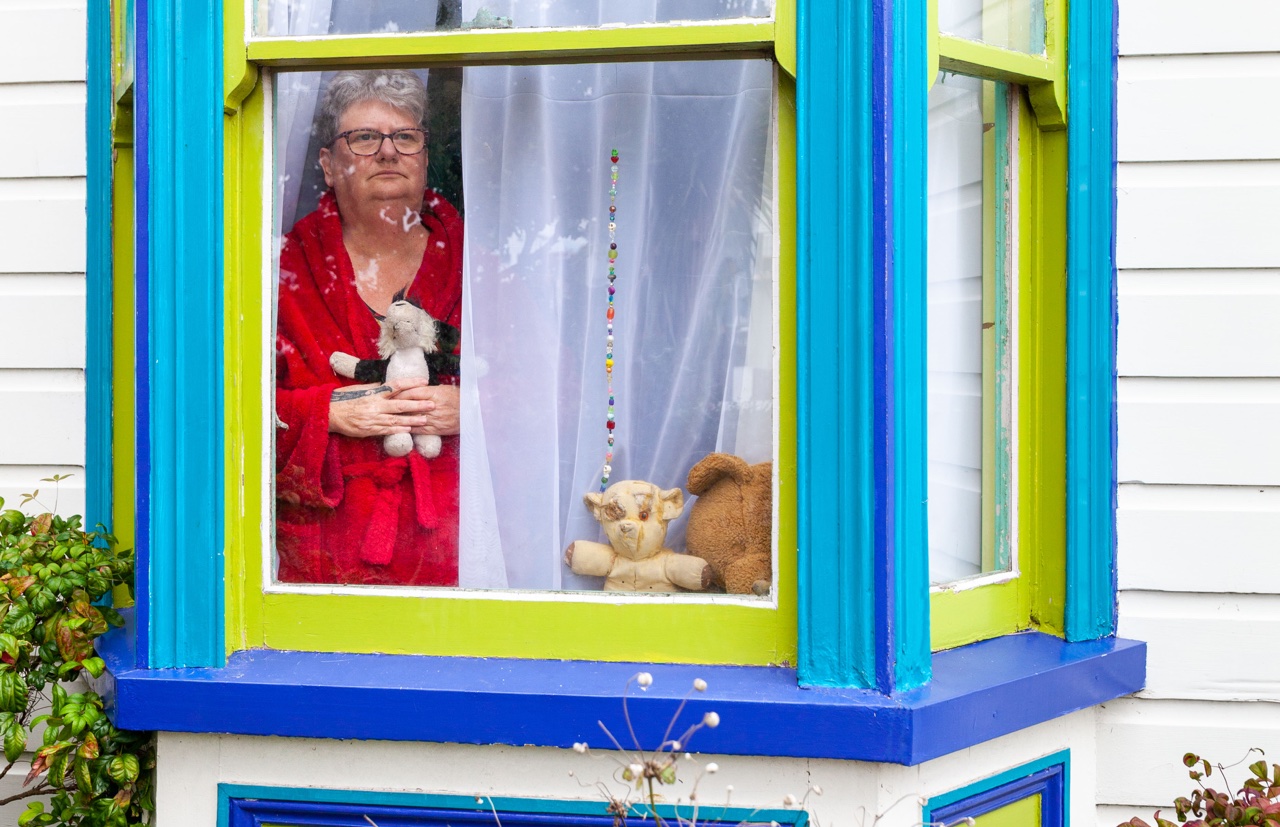 On a hot Monday, I sat on the old couch in our courtyard crying and coughing. It was March 23, and with phone in hand, I watched our Prime Minister, Jacinda Ardern, announce with gravity, that New Zealand was now in Level 3 lockdown and would move into Level 4 within 48 hours.

Overcome with anxiety and fear, I phoned my adult children – a son in Wellington and daughter in Auckland.

We all had tears at this unknown, unprecedented moment in our country’s history and the pending decisions about whether they would come home or not.

I took paracetamol, went back to bed and texted my husband.

You see my self-isolation began a week before, on March 17, when I was hit by a virus. I had a tight chest, headache, and was hot and cold.

I was hugely relieved, but still sick.

Like many New Zealanders, I didn’t want to bother my GP practice – Covid 19 was the No 1 priority and my chest infection felt trivial in comparison.

But by March 31, I was having major coughing attacks, my head was pounding and I was sleeping for hours. Even worse, my old nemesis, depression, had slipped in.

I rang my GP practice and learnt that phone consultations were the first line of defence. After talking with a doctor, I was prescribed antibiotics. They didn’t work.

Face-to-face GP visits were limited and the reasons why were made quite clear by Midlands Health Network CEO Helen Parker and medical director Jo Scott-Jones, who lead the primary health organisation for Taranaki.

This meant, during lockdown, 70 to 80 per cent of patient consultations were carried out by phone, video chats, emails and messaging via patient portals. To avoid clinics becoming infection hotbeds, the telehealth guidelines were followed throughout Taranaki, which has an equivalent of 59 fulltime GPs. In New Plymouth that number is 36.

While telehealth was the first response to patient calls, face-to-face consultations were available if a person needed a physical examination. But people could not just walk into a clinic without phoning first and being assessed by medical staff.

“In the first four weeks of the lockdown we know our network was down 38 per cent of the normal number of consultations and that was very similar across the country,” Helen says.

Even the numbers of people going to the emergency departments at both Taranaki Base and Hawera, dropped significantly during Levels 4 and 3.

There were also way fewer children going to ED or seeing GPs, because they weren’t at school, socialising with others and picking up respiratory viruses. Also, less people were having accidents.

People were respecting lockdown and self-managing minor complaints they would generally go to ED or see GPs for, Helen says.

When lockdown eased to Level 2 and then 1, appointments with GPs swiftly increased.

This is a move Jo encourages, because people need to contact their doctor if they’re sick or worried about something. “We don’t want people to defer a consultation about a bleeding mole, for example.”

Helen and Jo say there has been a large increase in people having flu vaccinations compared with the same period last year.

About 2700 more flu jabs were given in New Plymouth from April to June this year and for the whole of Taranaki that figure was 4250 higher.

“What I hear and see, is people were a bit more open to being vaccinated because they could see what was happening with Covid,” Helen says.

Out on the roads, accidents and deaths were down. At Easter, from 4pm on April 9 to 6am on April 14, there were zero fatalities on New Zealand roads – the first time since 2012. The highest Easter road toll in the past 40 years was in 1987 with 19 deaths.

On March 31, in Level 4, a 77-year-old man died after his quad bike rolled, and in Level 3, there were two road fatalities and a further two in Level 2.

A mixed bag of exercising and eating

Numerous anecdotal reports revealed many people reported doing workouts at home, plus running, biking or walking – sometimes twice a day – to get out of the house.

New Plymouth personal trainer Micah Lindsay-Brown says among her clients there was a whole range of lockdown outcomes, but says 80 per cent came through with their fitness levels the same or better.

“There were some people who stayed right on track and we did Zoom training. They were really accountable and in a good headspace. But some people fell off the radar.”

The couple have a contract with City Fitness, so when it was closed they set up a home studio; something they had wanted to do for ages but never had the time to achieve.

Micah even upped her own exercise regime. “I probably got in way more workouts than I would normally, when I’m focused on everybody else.”

New Plymouth’s Foy family made sure they made exercise, great food and dressing up a priority during Levels 4 and 3.

Aimee, 17, and her mum Sarah, did 30 to 40-minute workouts every second day together in lockdown .With the help of a phone app, first-hand experience and exercise knowledge learned at WITT last year, Aimee created a tough programme for her mother.

Sarah is a regular runner, tennis player and bikes across the city to work and back as senior communications advisor at Tui Ora. Throughout lockdown she was working long hours at home and Aimee was dedicated to her studies. The music-fired workout breaks in the middle of the day, helped clear their heads.

Olly, 13, did his own regular workouts and older brother Thomas, 20, sometimes joined him, while Dad Warwick, got back into running.

For their family wellbeing, all five ate dinner together each day and on Saturday nights had themed dress-ups, including Harry Potter, followed by a fitting movie.

“My fitness was zero. I hadn’t done any exercise for 40 years,” he says. “It’s the usual thing – the years are ticking by and the kilos are adding up.”

Throughout lockdown, Ross and wife Carmel had to keep working at Ross Graham Motors because the truck repairs company was an essential service.

“We had the opportunity to come home earlier than we normally would and that gave me time to get into the gym.”

He started off quietly, doing about 20 minutes on the treadmill, which he upped to 30 minutes and then an hour, increasing the intensity. He also did a bit on the rowing machine.

“I absolutely hate it,” he says. “It’s bloody boring.” While Ross is exercising, he has a speedy distraction. “I record all the motorsport during the week and watch it on the treadmill.”

During lockdown, he and Carmel also changed their eating habits to a mostly plant-based diet and drank a lot less alcohol.

By the end of June, he had dropped 23 kilos and Carmel had lost 7 kilos.

The worst and best of times.

About three weeks into Level 4 lockdown, psychiatrist Dr Yariv Doron went on camera to tell people in despair it was OK to ask for help.

“While we are all pretty reassured that the Covid figures are going down, it is no secret by now that there is a whole lot of suffering as a result of the lockdown and what it brings with it,” he said on a Vimeo video made for the Taranaki District Health Board.

Many people were struggling with isolation, financial woes, drug and alcohol problems, domestic violence and wobbly family relationships were magnified by lockdown. “We had couples who didn’t speak for seven weeks.”

Those homes became pressure cookers and, in some cases, young people ran away and slept in the streets.

The TDHB mental health and addictions service was ready to support people by offering telehealth.

Elderly patients and many in the addiction service were contacted by phone, adult mental health patients were offered phone or encrypted video chats, as were those in the Child and Adolescent Mental Health Service (CAMHS). If people needed to be seen by in person, they were visited by staff wearing PPE gear.

Yariv, whose regular role is as head of CAMHS, says digital contact suited young people. “Our clients are children and teens, so talking over Zoom or FaceTime is not second nature, it’s first nature.”

About five to six weeks into lockdown, more people began turning up at ED asking for help.

Since going to Level 2 and now Level 1, the service has been inundated with people seeking support. The most common causes of mental distress are anxiety and depression, often triggered by one or more people in a household losing jobs.

“Poverty is your biggest driver for suffering,” he says.

The TDHB service is like a “sorting hat”, Yariv says referencing the Harry Potter books.

People are assessed to see if they need to be admitted to hospital, referred for outpatient support or to health partners, including Tui Ora, Family Works and Barnardos.

But during lockdown Tui Ora worked alongside local iwi to care for its whānau, spreading warmth, goodwill and more than 5000 hygiene packs around Taranaki Maunga as part of a nationwide initiative.

The packs included wipes, soap, toilet rolls, disinfectant, cloths, household cleaning products, and gloves. If a family didn’t need them, they passed them on to someone who did.

Staff also kept in contact with many of the 4100 patients registered with Tui Ora’s GP service, which is open to everyone, not just Māori.

Bernard says some people still needed to be seen in person. “Someone with high blood pressure – you can’t check that over the phone. Some people needed routine preventative proactive care.

“Then we had a number of acute care things to deal with, like abdominal problems.”

But generally, people were looking after themselves.

“The impression we got from patients, was there was a bit of the element of ‘keep calm and carry on’,” Bernard says. “That’s one of the spin-offs from Covid times – it offered time for independence, that we have not had at other times.”

“People were accepting of the lockdown,” Linda says. “People’s lives were a lot simpler and that took a lot of stress off people.”

Many whānau enjoyed lockdown to varying degrees, Bernard says. People told him the only reason they could get out of the house was to exercise, like a bike ride on the Coastal Walkway.

Ongoing, there’s support for the younger generation through the organisation’s Taiohi Ora service. Also, those aged 10 to 18, suffering mild to moderate mental distress can receive free talking therapy from a list of private counsellors and psychologists through Taranaki Primary Connections, managed by Tui Ora.

My mood lifted as lockdown went on, but my respiratory illness didn’t.

On April 28, the first day of Level 3, I saw my GP in person, mask-to-mask, gloves-to-gloves. My temperature was up, I was wheezing and still exhausted.

The following Sunday, I was the sickest I’d been in lockdown and on the Monday given another Covid 19 test. A nerve-wracking 72 hours later I was told it was negative, prescribed new medications and my chest cleared up quickly.

So, lockdown for me, healthwise, was no walk in the park, no workout in the living room or a session on a treadmill. But I was deeply grateful for residing in a country where people’s lives were deemed more important than the economy. I also felt privileged to have a colourful home, a loving family and delicious food.  I was lucky, safe and, best of all, Covid-free.  ••