The Greatest Ride of All 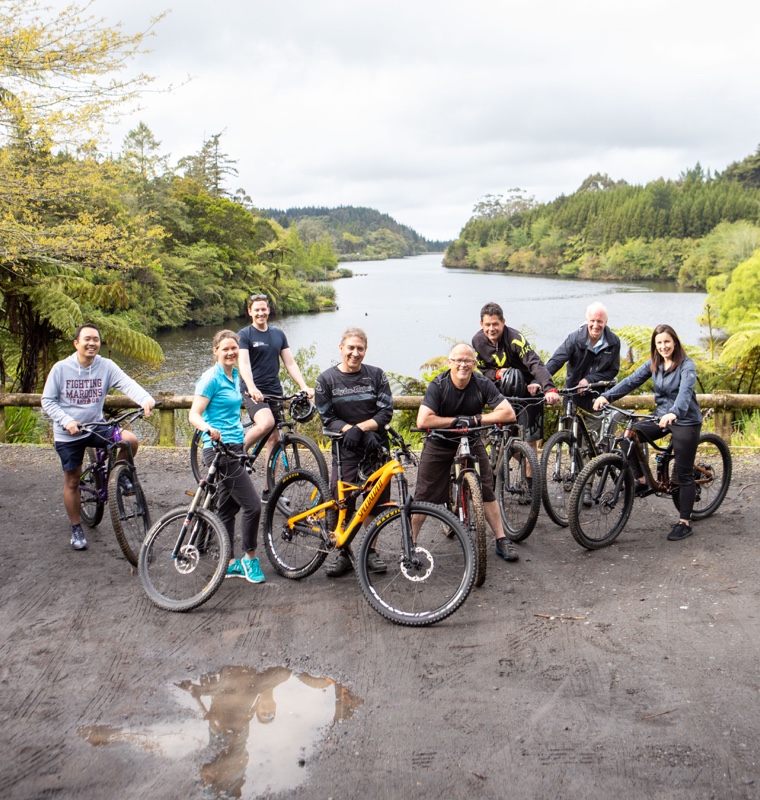 While other regions around New Zealand have been busy developing Great Ride trails, Taranaki has been lagging behind, but that’s about to change.

Twenty-two Great Rides like the Otago Rail Trail and the Timber Trail have reinvigorated regions around the nation. Taranaki has its iconic Coastal Walkway and trails such as Te Henui, Huatoki and the mountain bike park at Lake Mangamahoe.

However, “We are  behind in the scale of multi-day trail development compared to other regions like Taupo, Waikato or the West Coast,” believes Stacey Hitchcock of the fledgling Taranaki Trails Trust. “But the potential for trails here is huge.”

There have been ideas mooted for many years, including an extension of the Coastal Walkway, from Waitara to Opunake, or even Patea.

“Of all the major cycle trails in New Zealand so far, there isn’t a coastal one so this would be quite unique,” says Stacey.

Another idea is to develop a War and Peace Trail, telling and connecting the stories from our unique region.

But the Taranaki Trails Trust believe the most iconic trail in the region could be developed on the edge of the Egmont National Park (Te Papakura o Taranaki) — a 126km, off-road walking and riding trail around Mount Taranaki (Taranaki Mounga).

Other Great Rides tend to follow disused railway lines or logging tracks — this one would ideally follow trapping lines, Department Of Conservation tracks or paper roads where possible. All new track building would be managed to minimize the environmental impact and recognize the mana of the Mounga. The route would create the only Great Ride in New Zealand that is a complete loop.

“It would weave in and out of the park boundary and would wind through native bush, rather than up and down, with plenty of spots to take in the views,” says Taranaki Trails Trust chairman, Darryl Gaudin.

“There would be no start or end to the trail. You could join wherever you liked and you wouldn’t have to do the whole lot at once.”

There is however, one significant snag … at the moment, no biking is allowed in the National Park.

“Other Great Rides have had the same issue come up, and DOC and other  stakeholders and partners have allowed cycling on a specific trail, so there is precedence,” points out Stacey.

But there are still a lot of ducks to line up before anybody can wheel out their bicycle.

“Settlement of the Mounga is currently underway, and that is between iwi and the crown and there will be co-governance of Taranaki Mounga,” Stacey continues, “and then there’s the review of the park management plan, so that will take about two years.”

The group has also yet to figure out the finer points of the proposed route and there are a range of various interest groups including four councils, iwi and hapu and land owners to engage.

“It is really important that this is a project the region wants. At the moment this is just an idea and we want to gauge if people actually want it to happen and ensuring iwi and hapu, partners and communities are keen and it’s done the right way,” Stacey emphasises.

There are other trails that radiate out from the Mounga too … the general concept is of the Mounga Taranaki Trail being a hub, with the trails off it like spokes. Each town could create trails that link to the Mounga which would connect all of Taranaki with an off-road trail.

“Each council already has their own trails within their Long Term Plans,” points out Stacey. “For example New Plymouth District Council already has the Coastal Walkway extension to Waitara, and the trail from Te Rewa Rewa Bridge, following the Waiwhakaiho River up to Lake Mangamahoe.”

“It’s pulling together all the other trails that maybe stop at the council boundary and with a little communication and cohesion, you could join them up and create another trail,” says Darryl.

But there was no current overall picture of cycle trails in Taranaki.

In fact, there was no person, or group, who had an over-arching view of cycle trail development in the region; where current trails are, where proposed ones will be, and visionary projects.

This was one of the first tasks the newly formed Taranaki Trails Trust completed.

To complicate the job even more, all the councils had different mapping systems.

“Mapping the current cycle trails really made us realise we don’t have a lot trails but that the potential is huge.”

Sport Taranaki with Walking Access Commission undertook a Regional Tracks and Trails Vision and Strategy in 2017, to promote a unified approach with all parties who have an interest in cycleways and walking tracks across Taranaki. This was a great piece of work and a  high-level document, says Stacey but there wasn’t a group tasked to advance it. She identified that the point of difference between getting great ideas developed or not, was that almost every one of the 22 Great Rides developed so far had community trusts that had driven community-minded volunteers making things happen.

She and Darryl put out a call to see if anyone was keen.

“We didn’t know each other, and then we all went for a beer at the pub. That was literally the start of the Trust,” Stacey recalls.

“We went back to the Mayoral Forum and said we’ve seen the missing piece is the trust and we’ve got people willing to put in their time and drive it forward and work with councils and stakeholders.”

The group was given the green light and was officially set up in Dec 2018.

The new Trust set up their own Strategic Plan and on 4th November 2020 they launched the Taranaki Trails website www.taranakitrails.nz.

“The website was another missing component for Taranaki,” says trustee Charlotte Littlewood. “Mountain biking and people out on their e-bikes is a large market for national and international tourism and when you googled Taranaki Trails there was no place that promoted our local biking trails.”

Beach Energy sponsored the $5000 cost to get the site up and running, and it links into the food, attraction and hospitality businesses on Venture Taranaki’s taranaki.info site.

BUILD IT AND THEY WILL COME

The benefits for tourism are obvious and well-documented.

“We’ve seen all the economic data around what these trails bring to small towns and regions,” says Stacey. “Cycle trails are enablers — they give opportunities for accommodation providers, attractions and hospitality businesses to enhance the cycle trail experience. People see the opportunity and respond to it.”

But there are much wider benefits believes Darryl.

“We have these great engineering companies here and the amount of work we could do here … it might be building a bridge, or viewing platform … if we could get every part of the trail done by people and businesses in Taranaki, that would be phenomenal.”

Stacey adds that people on courses at WITT or with Taranaki Futures or Feats could also help build the infrastructure and spread the benefits throughout the community, right from the drawing board stage.

Then there are the wellbeing benefits for the people of Taranaki and our visitors, of having access to a network of high quality trails that exposes people to nature and can be safely ridden and walked all year round. The physical and mental benefits of getting out and being active, particularly in a natural environment are well known.

“Connecting people to our environment is a huge driver for the team,” says Charlotte. “Not only ensuring all trails are built in a sustainable way that enhance the environment, but creating those connections for visitors and locals to experience and understand our stories.”

Already various groups around the district are working on their own trail concepts.

“There’s a group that wants to build a heartland trail from Mokau to Ohura so they’ve set up a trust,” says Stacey.

Another idea being worked on by Ian Balme of Forgotten World Adventures, is to make a trail alongside where their rail carts run, which would link Taranaki with the Central North Island.

“That ride will be incredible and will rival the Otago Rail Trail — there will be twenty tunnels you’re biking through. He’s applied to the Provincial Growth Fund for that and we wrote a letter of support.”

Likewise the group is helping advocate for the Oakura Coastal Trail, which runs from Oakura to Fort St George.

“A group of locals have done work on this trail and have been requesting help for many years to get it completed,” says Darryl “The trail’s already there — there’s just a couple of spots that need development then you’ve got a great trail extending around the Coast.

“We want to be the central information point for all trails, so we know what’s happening and can connect people up and give advice on procedure and funding avenues.”

Darryl has also contacted some of the developers of various Great Rides around New Zealand to ask them ‘what went wrong?’ And ‘what do you wish you had done differently?’.

He got some great honest answers back.

“Alongside building some epic Great Rides, all of them had a story of woe.” He hopes learning from others’ mistakes will be beneficial to Taranaki’s efforts.

“So when we finally build and market Taranaki’s Great Ride it has the potential to be not just a Great Ride, but the Greatest Ride.”