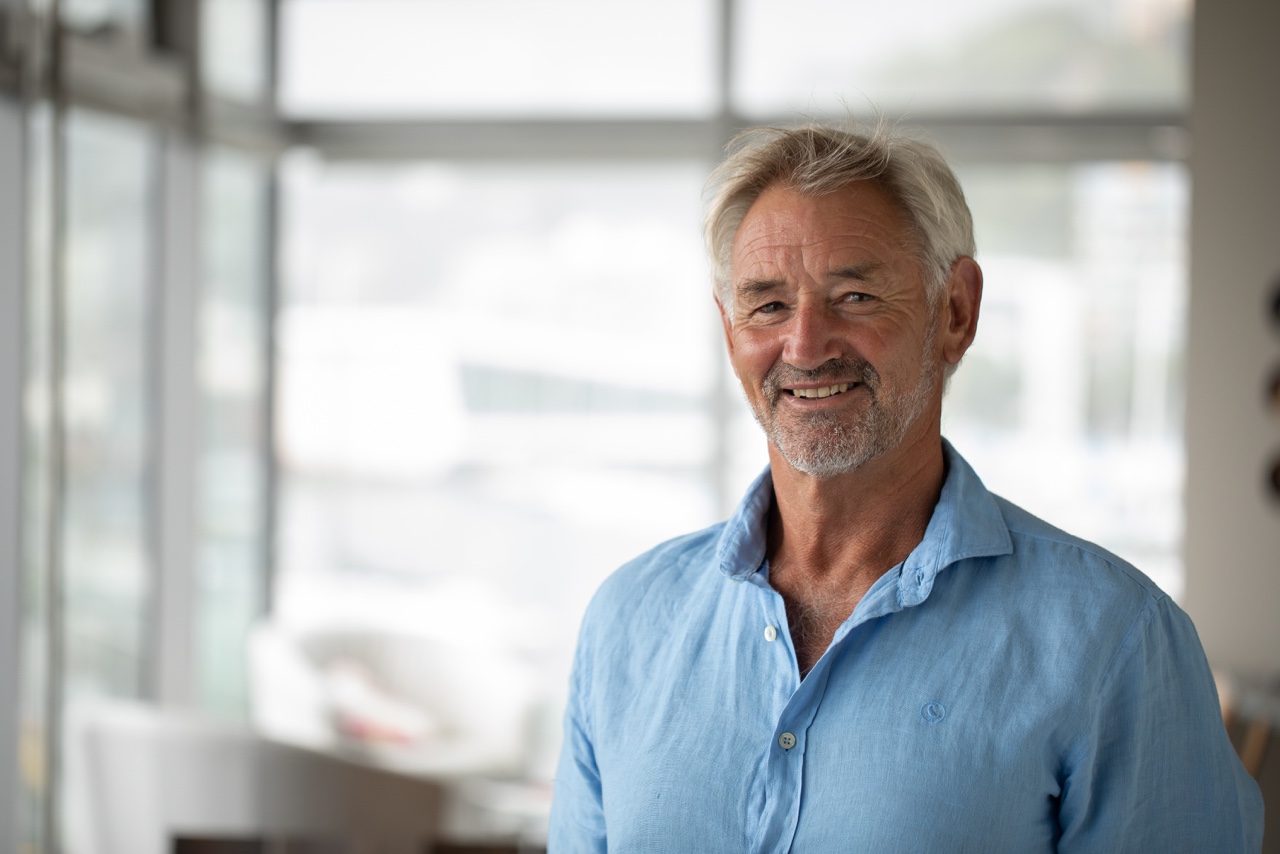 Mark Thomson can scent a business opportunity in deserts, big cities and close to home.

The former Spotswood College student helped spread on-counter Eftpos machines around New Zealand in the 1990s, ran a successful landscape, flower and plant business in Bahrain during the 1980s and now supports up-and-coming businesses and entrepreneurs.

“Rugby was front and centre, while in the summer I played a little cricket and spent most of my free time at Oakura Beach as a ‘student’ of the NPOB Surf Life Saving Club.”

Over the years, Mark won surf lifesaving gold medals for rescue & resuscitation at the national championships.

He also played basketball, badminton and, on Sundays, headed for the golf course.

“I wasn’t an academic and lived for the bell.”

Not surprisingly, his favourite subject was phys-ed, but he did enjoy English and geography.

“I have a passion for writing and love the intrigue of visiting new places with their varied and rich cultures, and histories. I’m picking that’s part of my DNA though rather than being nurtured into those areas via any curriculum,” he says.

While he doesn’t remember a favourite teacher, there’s one personality who stands out. “Janet Grant was a central figure at Spotswood while I was there. She didn’t teach me from memory, but you do have to look back and admire the passion and commitment people like her had for the school.”

Mark believes New Plymouth’s only co-ed high school did have an influence on him.

“I think you become something of a reflection of your environment… family, friends, schoolmates, teachers, and the cultures associated with all of those. So, given that, I’d attribute those early years to helping shape my future.”

After he finished school, Mark went to teacher’s college at Palmerston North as an “I don’t know what else to do” strategy.

His best mate, Paul Broederlow, was heading to Palmerston to “T Coll”, and he sold it to Mark as being a continuation of school. “Perfect for me at the time.”

During those years, both men represented Manawatu in rugby.

Four years later, with a Degree in Education, Mark returned to New Plymouth, where he played 12 games for the Taranaki team.

“I taught at Vogeltown School for one year before heading overseas where I roamed for seven years,” he says.

He greatly enjoyed his only year of teaching. “I had a great headmaster in Stan Lonsdale, who was mostly about giving the kids a rich and fun experience.”

“I was always going to travel, having made a plan years earlier with a couple of mates, so after a year I loaded essentials into a pack and effectively departed New Plymouth for good,” he says.

“Overseas, I rowed my own boat, opting for work that I enjoyed.”

Between 1980 and 1988, he toured the world, living in London and the Middle East. He also found love with Deb, a Hawke’s Bay woman he met at teacher’s college and hooked up with in the UK capital.

The husband and wife have three children, daughters Dani and Kirsty and son Scott, and three grandchildren. His life’s dream is “keeping my growing family close and helping guide them to lead meaningful lives”.

In Bahrain, where Mark also played rugby, he and Deb set up a landscape contracting business, along with a retail outlet selling fresh flowers and indoor plants flown in weekly from the flower markets in Amsterdam.

“We leveraged off our contacts at the Bahrain Rugby Club for business in both areas,” Mark says.

“We started with no experience in either field — just keen interest and the scent of an opportunity. We arrived there with virtually no money and in five years managed to set ourselves up for a reasonable start back in New Zealand.”

“Fortuitously we were able to register that name, so for $90 we took full ownership of the brand that the banks had laboured for years to develop.  It was a nice example of right place, right time. Bingo.”

Before that, they worked for Panasonic in Wellington selling photocopiers, faxes, phone systems and cellphones, and spotted the Eftpos opportunity.

They had no part in developing the system or bringing the on-counter terminals to the country, but their efforts were ground-breaking.

“What we did have though was some combined and useful recent experience in the area of leasing business equipment. That was the gap in the Eftpos system model in New Zealand that we developed, filled and effectively owned for the next five years.”

Their challenge was to create a company that could sell, install, and service the nation’s in-store Eftpos hardware needs.

“It took a good few years to iron out the kinks and get the New Zealand card-carrying public on board.”

The company was ground-breaking in that it offered a service not available at the time. It provided the market with a lease option for terminals at dollars per week as opposed to thousands of dollars.

“That definitely played a big part in the rapid spread and use of the system in the mid-to-late ‘90s. Peter and I look back with pride at the company we created. ENZ was by all accounts a great place to work,” Mark says.

“It was six years on a roller coaster ride that everyone enjoyed. We provided a lot of people with jobs, learning and in many cases, inspiration to get out and do their own thing.”

Mark and Peter sold the business in 2000. By then the company owned about 35% of the installed base of terminals in the country.

“The majority of those customers had been introduced to us by BNZ and Westpac. ANZ saw a good strategic opportunity with our customer base and offered us good money to sell. It was an easy decision.”

Based in Wellington, these days Mark travels up and down the country for work. “I invest in ventures combining the opportunity to help grow businesses and work with, and mentor, up-and-coming entrepreneurs. It’s right in my sweet spot.”

The 60-something man is also physically active. He plays a bit of golf and is hooked on open water swimming. “I took it up after a near 40-year break from when I last swam a kilometre or two at Kawaroa Baths.”

A group of like-minded souls, called The Washing Machines, swim almost daily in Wellington’s Oriental Bay.  “It helps keep the blood flowing and aches and pains at bay.”

Sat morning 11 April – Official opening and group photos (at the school), followed by lunch for foundation students and ex-staff at the Devon Hotel.

Anybody keen to attend can register on the new Alumni website at www.spotswoodcollegealumni.co.nz.