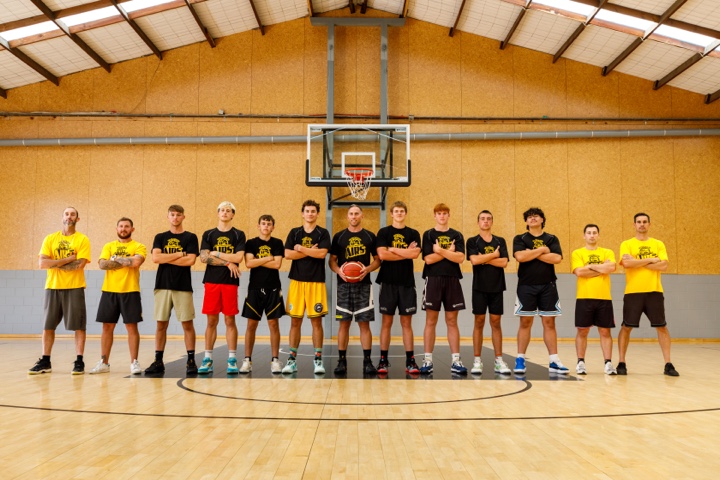 It’ll be interesting to see what the TAB makes of the Taranaki Steelformers Airs in 2022.

Perpetually tipped as the team with the longest odds on winning the New Zealand National Basketball League (NZNBL), this season the team boasts two Tall Blacks players and will be trained by the Tall Blacks Head Coach and Assistant Coach.

Meanwhile, the organisation is being led by a 25-year-old from Opunake — the youngest General Manager in the league.

Five months before the New Zealand National Basketball League (the Sal’s NBL) was due to tip off, the Taranaki Steelformers Airs revealed a massive coup — securing the services of basketball legend and current Tall Blacks coach, Pero Cameron, for the 2022 season.

Cameron has inked a one year deal with the Airs, where he’ll work closely with Airs General Manager Mitch Langton to build a program that has a focus on youth development through basketball in Taranaki.

Langton is the youngest General Manager in the NZNBL and after less than a year in the role, he has managed to sign the most successful man in NZNBL history. Pero Cameron has won a record eleven NZNBL titles, nine as a player and two as a coach. In early 2021, he was named the number one player in the history of the New Zealand National Basketball League.

“Not only does he coach the Tall Blacks, but he also has a strong emphasis on culture, and developing the region is what we pride ourselves on,” says Langton.

Cameron has been appointed as Taranaki’s Director of Basketball — a role that sees him working in the community developing basketball. He will also be the Lead Assistant Coach for the Airs, working alongside Airs’ Head Coach, local man, Trent Adam.

In an interesting dynamic, Adam has recently been appointed Tall Blacks Assistant Coach, and the pair will switch their coaching roles when it comes to the national side.

“Pero saw something here that was quite close to home (he’s from Northland),” Langton believes.

“He knew Trent and he talked to other people in basketball circles who knew me and what I’m trying to do here.”

“It’s awesome to be returning to the league that gave me my start, and to be helping grow the game in the great region of Taranaki,” said Cameron at the time of his appointment. “The Airs have struggled on the court in recent years, but the work they do off the court has set them up for a great future, and it’s one I’m excited to be a part of.”

After a successful tournament coaching the Tall Blacks in the Philippines in February, Pero will be away through June and July and miss a chunk of the NBL season (which runs from late April to mid-August). The Tall Blacks will take on Korea and the Phillipines in the FIBA World Cup qualifying matches scheduled for 30 June and 3 July respectively. That is then followed by the Asia Cup. It is not yet known whether Trent Adam will also be away, but the pair have four other assistant coaches to call upon for the Airs should that be the case.

“We’ve got a great group of coaches that are working together to get the most out of the boys leading into the season,” says Langton.

“We’ve actually built what I believe to be a program similar to teams like the Rams and the Saints who have shown great success over time. These programs with designated roles provide some  professionalism that allows us to take the team to that next step.”

A BREATH OF FRESH AIR

As General Manager, Mitch Langton oversees all aspects of the organisation.

He has taken on the roles previously undertaken by a committee of volunteers: seeking sponsorship, realising commercialisation, running game day requirements, monitoring the coaches and performance of the team, overseeing marketing, the Coaching In Schools programme and installing basketball hoops around the region.

It’s a lot to take on for the 25 year-old from Opunake.

Langton got his start working at Basketball New Zealand (BBNZ) for three summers while attending Otago University where he gained a Bachelor of Physical Education. He worked full-time at BBNZ from Dec 2019 until April 2021.

In 2020, when the NBL was condensed into a six-week competition with all teams based in Auckland, Mitch was immersed in all aspects of the league, working closely with the influential former Sal’s NBL General Manger, Justin Nelson.

“I became very intrigued with this whole business aspect of basketball. Initially, I always thought I’d coach the Airs — that was my goal. Then I kind of took a step back and realised a General Manager role would make more of a difference to Taranaki basketball.”

“He allowed me to continue working through the Covid-era, when he didn’t have to. And that led to a whole bunch of opportunities that resulted in me getting this role.”

When the Airs’ General Manger job was advertised, Langton had no hesitation in applying.

The Airs had never had a GM before and he wanted to be its first one.

He started just before the Airs’ first game for the 2021 season.

“Everything had already been sorted for that season so it was more about understanding what we had and what we didn’t have that other teams provided,” Langton says of his first year at the helm.

The 2022 season has been tough before it even begins.

“We’ve been making decisions without really knowing what the environment will look like by the time the competition starts,” says Langton.

For instance, even in January, it looked unlikely that import players would be able to get into New Zealand. At the time LIVE went to print, clubs could still not sign imports but this might well change once the NZNBL has certainty over visas and the border reopening.

The start date for the competition was delayed from early April to late April, opening the door for NZ stars playing in the Australian National Basketball League. Their regular season is due to finish near the end of April, with play-offs happening in May. With no need to quarantine, Kiwi teams will be seeking to entice the 20 Kiwi players currently playing their trade across the Tasman to sign up for the Sal’s NBL.

New recruits include recently selected Tall Black, point guard Richie Rodger (Otago), who played for the Airs back in 2018, along with youngsters Caleb Smiler (Waikato) and Benji Freeman (Christchurch).

It also looks like Aaron (Aunty) Bailey-Nowell’s number 22 shirt may be seen on the court in 2022. If selected, the 40 year-old will surely be the oldest player in the league – celebrating 20 years playing in New Zealand’s premier basketball competition.

Of the nine players signed so far, only two are from Taranaki.

“We need to surround ourselves with players that teach us how to be professional,” Langton believes.

“We want to establish an environment that encapsulates what we want to be, and our Taranaki development players can learn from that.”

Having Pero on board allows Langton to drive the Airs organisation in a direction of professionalism.

“He understands what players are seeking so that we can put attractive packages together for them.

“His experience of not only the NZNBL but other basketball leagues around the world, make him a fantastic resource for us. He has key relationships with not only New Zealand players but overseas players, clubs, coaches and agents.

“I guess, selfishly, I’m learning a lot from him too.”

The biggest thing for Langton, is player welfare and community engagement.

“If you can tick those boxes, everything else is a lot easier.

“We’re working towards having enough business and funding support to allow the players to live here full-time.

“We now have the facilities and commercial support for players to receive year-round training, conditioning and physio support.”

The Sal’s NBL season has been delayed by three weeks because it was originally scheduled to begin right when it was anticipated that Omicron would hit its peak.

The games originally scheduled for the first three weeks have now been tacked on to the end of the season, meaning play-offs are now scheduled for 10 – 13 August at Eventfinda Stadium in Auckland.

The Airs’ first game is an away match versus Auckland Tuatara at 7:30pm on 30 April, with their second match the following afternoon in Palmerston North against the Jets. In a sponsorship deal, The Good Home in New Plymouth will be screening all away matches.

The first home game will be on Thursday the 5th of May against Hawkes Bay, a team which features two Taranaki players, Quintin Bailey and Derek Albertsen.

As for how the Taranaki team stacks up, Langton says the goal is to make play-offs.

To be fair, that is likely the goal of all 10 teams in this year’s league.

One reassuring fact is that the team won’t do any worse than the last three seasons, when it has placed last.

But that hasn’t stopped the fans from coming to watch them play. TSB Stadium is often thronging with people and the Airs consistently have some of the biggest crowds in the league.

The Airs’ organisation puts on a show for sure, with non-stop action throughout the two hours most matches extend across.

“In 2021 we had five games where we lost by six points or less,” says Langton, “and we had several wins, which the home crowd really enjoyed.

“Throughout the season, the thing that really impressed me though was how the team showed heart. Even in the two games where we lost by over 20 points, the team still fought until the end. And that’s something you can’t teach.

“If we can bring that heart to this season, along with the talent and knowledge we now have, we’re starting to build a recipe for success.”