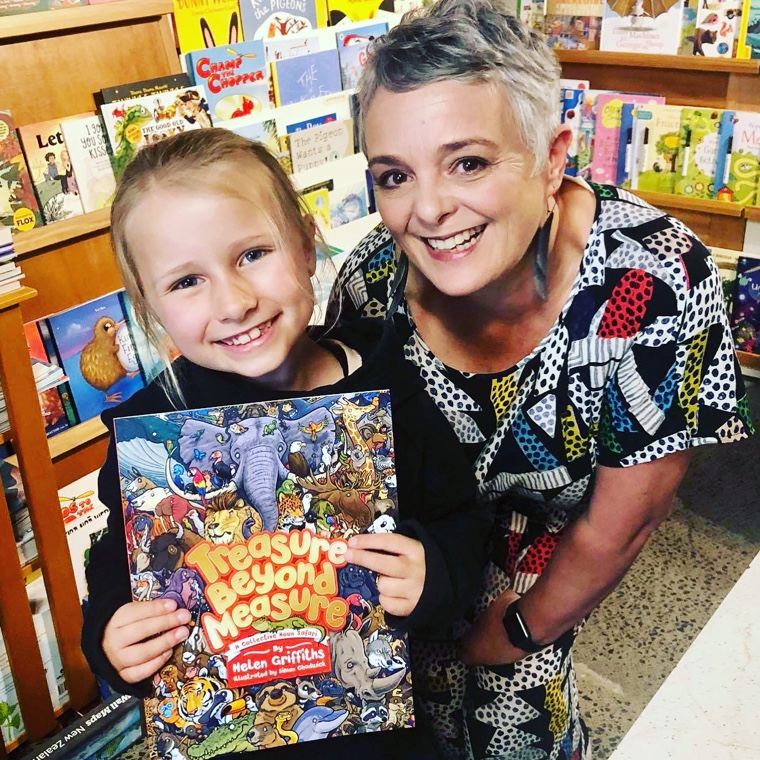 ‘Treasure Beyond Measure’ is a children’s picture book that celebrates the richness of language and its link to biodiversity with an environmental twist.

By the end of January over 1700 copies had been sold, including copies to Canada, Norway, Japan, Australia, USA and UK.

Treasure Beyond Measure was listed alongside JK Rowling, David Walliams and Dr. Seuss in Unity Books Children’s Bestsellers List November 2020. A copy sent to Sir David Attenborough prompted a handwritten thank you letter from the legend himself. Other favourable high profile responses to the book have been received from PM Jacinda Ardern and HRH Prince William, Ambassador for Wildaid.org  and Patron of Tusk.org

“I started writing poems as a way to deal with the pressures of owning a 7 day a week hospitality business, Rumpus Room in Taranaki — it was my creative vent!” Helen recalls.

‘Treasure Beyond Measure’ started out as a short poem written for Conservation Week in 2017 which Helen went on to perform at WOMAD  in March 2018.

“Audience members suggested it be turned into a book so I contacted Craig Smith, author of Wonky Donkey for advice. And that’s when this Collective Noun Safari became a literary adventure……..”

Helen met illustrator Simon Chadwick on Facebook after putting out a random request for “someone who could draw animals”.

To fund the artwork, she ran a raffle for entrants to win being drawn into the book. New Plymouth youngsters Sophie and Avery Kuriger won that opportunity and now feature on one of the pages.

Upon release, local Taranaki businesses generously sponsored copies of the book so there’s now at least one copy in every Ministry Of Education primary school in Taranaki. Helen has also recently signed with NZ distributor, Tikitibu and completed a Taranaki and  Wellington Schools Tours plus book signing events at Unity Books, Vic Books and Schrödingers Books.

Printed on sustainably sourced paper, each double spread features a globe to find an example of human folly in relation to the environment to prompt discussion about behaviours we need to change to write the planet’s happy ending.

Helen also came up with the idea of a Worldwide Book Relay to promote the book. “I’m sending a limited number of free copies of ‘Treasure Beyond Measure’ to addresses overseas. The book gets delivered to a family who read it and when finished, they write their name inside the cover before passing/sending it onto another family to enjoy. When the book has been seen by 50 families, it gets returned to New Zealand – hopefully some time later this year. When that happens I have some thank you gifts for everyone involved in a successful book relay. It’s a bit of a leap of faith but I’m looking forward to finding out where the book ends up.”