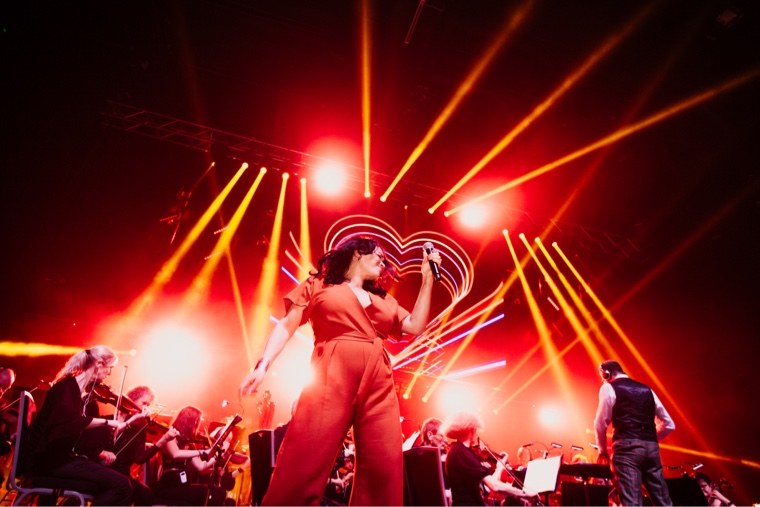 On Saturday, 23rd January 2021, Synthony, along with partners New Plymouth District Council and Venture Taranaki, will proudly present their first ever outdoor show at the TSB Bowl of Brooklands in New Plymouth.

“It’s more than just a show — imagine a symphony orchestra, a DJ, and an epic backdrop of visuals, lasers, and a state-of-the-art sound system. It’s a magical, uplifting, hands-in-the-air dance party like no other.

“The audience will be taken on a journey back through the most memorable electronic music of the last 30 years.”

The afternoon will kick off with classic summer grooves before heading into the night with all the club favourites from the last 30 years from the likes of Eurythmics, Basement Jaxx, and Fat Boy Slim, to Avicii, Pink Floyd, and Eric Prydz.

“Track after track, fans are taken down memory lane, celebrating dance music that has been embedded into their subconscious,” says Erika.

“I attended as a spectator last year; the experience was both breath-taking and mesmerising. I was dancing my butt off and was jealous I wasn’t one of the threads of this epic production,” says Jason.

“This year I’m involved, and I am beside myself about it. Being the first outdoor show, the production in New Plymouth holds a certain significance for us. What I can tell you is the kiwi production crew have moulded something not only world class but almost other worldly.”

Synthony was founded by DJ and producer Erika Amoore and fellow Kiwi David Elmsly. The pair sold out their first ever show in 2017 at Auckland’s Town Hall to a packed house and unprecedented reviews.

The show’s creation brought together key New Zealand talent. Peter Thomas, conductor and music director of the Auckland Symphony Orchestra, believed in the unique concept from the start and soon after enlisted the services of Ryan Youens, an arranger with hundreds of professional credits to his name, including film scores for ​The Hobbit​.

After sold-out events at Auckland Town Hall in 2017 and 2018, Duco Events, a major event promoter with a 16-year track-record, purchased the concept with an ambitious long-term vision to expand the event from one city to multiple venues and cities across the globe. In 2019, they sold out five shows across New Zealand and also took the show to Australia.

In 2020, Synthony will now stage its biggest ever NZ-wide tour, supporting the live music industry’s recovery post COVID-19. And in 2021, Synthony will return to Australia and launch in other countries.

Planning the show in the middle of a pandemic has brought some unique challenges, says Erika.

“Fortunately, we’re not affected by the international travel and border restrictions because all our performers and crew are locals. But we’re working hard with the Council and Venture Taranaki to ensure the show goes ahead with whatever social distancing requirements might be in place in January.”

“If, for whatever reason, we can’t go ahead on the day then we do have backup dates in place. And any changes to event date will be communicated to ticket holders no later than two weeks prior to the show,” says Erika.