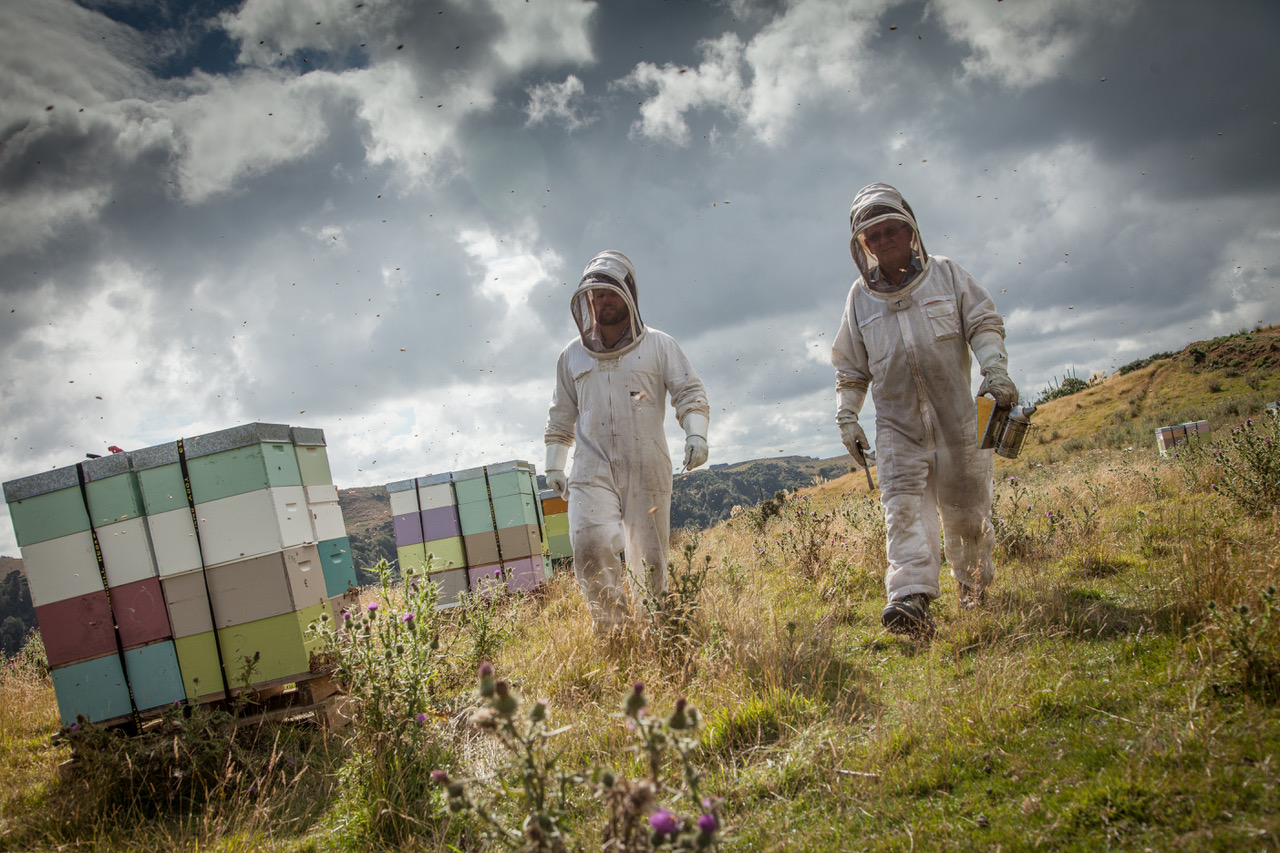 Missing out on a contract deal with the Taranaki Bulls rugby team led to a chain of events culminating in James Annabell’s Egmont Honey taking out Taranaki’s top business award in 2018.

The four year old company’s turnover currently stands at $30 million per year.  It has also become part of the Go Healthy group of companies, where James is an observer on the board. In November, Go Healthy won the Masters of Growth category at the Deloitte fast 50, with growth of 561% — a marker James Annabell says the Taranaki business is very happy to have significantly contributed to.

He dropped out of university after three years studying for a law degree, and returned home from Wellington to take up a rugby contract. Playing for Taranaki from 2006 – 2008, at the age of 26 it looked like his fledgling rugby career was over when he missed out on a contract for the 2009 season.

“I had a mate (playing rugby) in Hong Kong who said ‘come over here and see how you go’,” he recalls. “The first couple of weeks were pretty daunting but I loved it and was there five years.”

It was in Hong Kong that James got a taste of the honey business.

“(When I was back in Taranaki) I did some work for the Regional Council, sort of sustainable land management. There was a guy who was a farmer, but also a beekeeper and when I went to Hong Kong he said to the owner of the company who collected his honey, ‘there’s this guy who’s just gone to Hong Kong and I think he’d be good for your sales team.’ So the business owner flew over to see me and I knew nothing about honey,” James recalls. “We got on pretty well and he offered me a six month contract and it went from there.”

It didn’t take James long to see the potential for growth in the manuka honey market, where it’s a premium product sold in pharmacies, high-end supermarkets and department stores.

“In China, people eat honey by the spoonful as a health supplement or they add it to warm water and drink it,” says James. “They swear by it.”

He started thinking about what he would need to do to start his own company.

“I have always been entrepreneurial but I knew I had to learn the industry’s every detail before I was equipped to launch my own. My previous boss had suspicions I was looking to start my own company and said to me ‘if you think you are going to go on your own and it will be easy, think again, you will more than likely fail’. The next day I handed in my resignation. That kind of threat was just the motivation I needed and I still draw on that conversation today for motivation. Ask any of my former school teachers, if I get told I can’t do something, that is exactly the challenge I need to prove that it can be done. I am not very good at falling into line.”

He did get one thing from his former employer however that he wasn’t about to let go …Frenchwoman, Fanny, who also worked there. The pair wed in February of this year … at Egmont Honey’s premises on Connett Road with a marquee and band The Black Seeds

What to get Dad for Christmas?

In 2015 James Annabell headed to Trade Me and found the perfect gift for his dad Toby — a beehive.

An agricultural spraying contractor, Toby Annabell  found he liked working with bees so a month later he and James bought 100 hives. Eventually Toby sold his spraying business to work full-time for the fledgling company he and his son had set up. James is the CEO and runs the business, while Toby looks after the hives.

In April 2016 they made their first shipment — 500 kilograms to Hong Kong.

By November that year, they had exported a number of 20 ft containers to 10 different countries and also opened their retail shop, Egmont Honey, in Devon St.

In May 2017 they made the pivotal deal with Go Healthy which gave James and Toby capital to sky-rocket Egmont Honey’s growth substantially.

James has a built up both a business relationship and friendship with the Go Healthy founders over years of dealing with them. When they approached Egmont to invest in the company it was a no brainer and a great move, says James.

These days Egmont Honey owns 4000 hives but buys honey from many other hives from landowners throughout New Zealand. The company currently has more than 30 products it sells, including a skincare range.

They trade over 800 ton of honey annually both domestically and to 18 countries worldwide, but their biggest market is Australia where Egmont Honey’s products are sold in 900 Woolworths stores.

“When I got the phone call (from Woolworths), initially I thought it was a friend playing a prank,” James recalls with a grin.

A deal with a UK distributor is also in the pipeline.

James believes a big part of their initial success came from his familiarity with the culture in Hong Kong. He also puts the customer at the heart of the business.

“We need to know our customers’ needs intimately. There is no better way to do this than getting on a plane and meeting customers face to face. Its not cheap but worth every cent.

“Even though we are getting larger by the month, we don’t act like it. We build lasting relationships and work with our customers’ needs. Our suppliers are just as important to me as out biggest customers, and we treat them as such.”

A two-tiered scientific definition for manuka honey brought in by the Ministry for Primary Industries has helped the entire honey industry, James adds.

“Consumers can now be confident that what they are buying is genuine multifloral or monofloral manuka honey.”

The success of Egmont Honey has resulted in 39 jobs at their Bell Block site, and a good friend from James’ university days designs their logo, labels and other marketing collateral.

“We are now his biggest client.”

James takes nothing for granted and works many hours.

His dad Toby reckons as a kid, James was “bloody dynamite!”

“He was always on the go, never sat still. He was never very practical — he was always going to be doing something with his mind.”

Mum Karen says James has exceptional communication skills, getting access to people that others can’t. “He has amazing focus, self-belief and he’s good at what he’s good at.”

Toby lists his eldest son’s greatest qualities as his intellect, his problem-solving ability and the fact he’s a people person.

A prime example of that comes from mum Karen.

“When he was about three, we lived in Whanganui and lived down a long tree-lined street. Mr Whippy came by one day and James came racing in wanting money to buy an ice cream and I said ‘No, no, it’s too late, he’ll have already gone’ and he got on his little bike and roared away down the end of the street and the next thing Mr Whippy is backing all the way to our place! He asked him to wait there, he ran in, got some money and got himself an ice cream,” she laughs.

As for schooldays, “he never did his homework” and by fate, ended up boarding at New Plymouth Boys’ High School.

James really wanted to attend NPBHS because of the rugby. The school already had their full quota of boarders but one had opted not to attend the following year after all, and James took up the space.

“We didn’t realise how much James thrived on routine, so Boys’ High was actually really good for him,” says Karen, “while rugby taught him discipline.

“The biggest surprise was when he did School C and passed all five subjects. He never really shone as a scholar and no-one was more surprised than James. He realised then that he was more intelligent than anyone knew. Growing up he didn’t know whether he was left or right … I think he’s ambidextrous … but with that success and rugby, he actually realised he could do things.”

James became Head Boarder and captain of the First XV in seventh form.

Toby’s been a big influence,” Karen believes. “He (James) was always trying new things, changing jobs, scheming and dreaming, very much like his father.”

“He was very, very successful and entrepreneurial too,” says Toby. “He wheeled and dealed in farms and then started a very successful racehorse breeding stable called Monovale Stud in Cambridge. James is very much like him.”

The Annabell family were originally from Derbyshire and became pioneers of the Waitotara Valley area.

“To see our own brand on the shelves gives me an enormous sense of pride.”

He believes in the Hopi Indian proverb ‘ those who tell the stories rule the world’.

“We work hard to not only define our brand but communicate our story effectively to our customers. On our website we have video stories of people involved in our business, from the farmers who stock our hives, to the helicopter pilot that collects them at the end of the manuka flowering season.

“Different areas of the country have earlier and later flowering seasons so it’s vital to be able to source the product from across the country. During the winter it’s all about maintaining the hives and keeping the bees healthy.”

In fact, James Annabell’s office is awash with sayings.

‘Fail fast, fail often and fail cheap’ is framed on one wall.

We look to get prototypes of products to market quickly, to test consumer demand. If they sell well, we scale up; if not, we move on to the next idea. At the same time we never forget our core range and don’t let ourselves get too distracted.”

Consequently, after four years in business Egmont Honey has tested over 100 products.

James made it as a top 20 finalist for the Entrepreneur of the Year awards for New Zealand in 2018. He was also selected to join a trip to the US with New Zealand Trade and Enterprise where he met Tim Brown, the New Zealand founding partner of Allbirds, a company that sells sports and casual shoes made from merino wool.

“He tells a great story of how the minimum order run on their first lot of shoes was 10,000 pairs of shoes. Tim being the conservative Kiwi thought this was a huge risk whereas his American business partner said ‘don’t worry, we are going to sell a billion pairs of shoes’!”

That has helped James realise that Kiwis generally are quite conservative and that “it’s better to think big and act small.