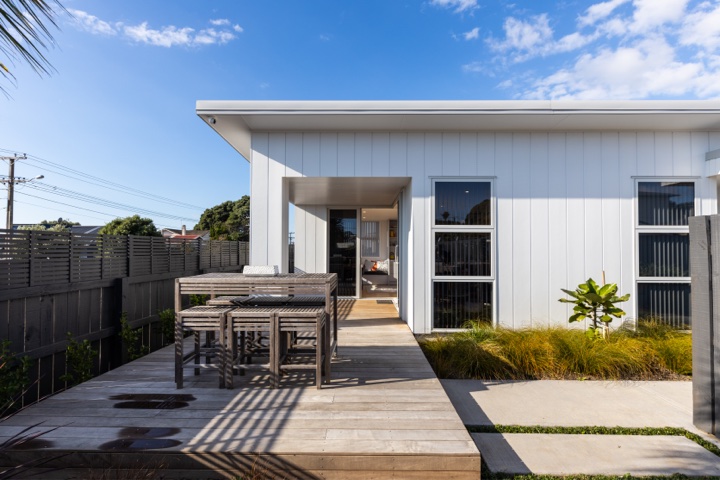 With rising housing costs – whether people are buying, building or renting – local builders are seeing a definite trend to smaller homes.

Gareth and Tania Collins, of Gareth Collins Building, say they have several smaller home builds on the go at the moment.

“We recently completed a 94m2 two bedroom home for a couple in their retirement on a compact central site, and are currently building 2 x 80m2 two bedroom separate small homes, adjacent to each other, to be rental properties.”

“It’s for a first home buyer, who wanted to get their foot into the house market,” says Tania.

“With the huge leap in housing prices and now interest rates on the rise too, I’m sure smaller homes will become an attractive option for some.”

Lower maintenance costs and utility bills also increase the appeal of living within a smaller footprint.

“With clever design, which is smart about the use of space and functional storage, less can be best,” Tania adds.

The section size is 405m2 and the couple found working with a small section and constrained building area necessitated some clever design.

“It sets boundaries,” says Kayne, which helped them stick to the budget.

The couple had built a new home before and did a few things differently this time round.

“We had built with a group builder for our first home and started going through that process again for this house,” Shelby recalls.

“It was in 2020 and Covid lockdowns were starting to have a real impact on the build process which became long and drawn out. Building design was probably the main problem point for us having such a dinky section to work with – it took a long time to get standard plans updated to work with our site.

“We took a step back and wondered if we should be approaching the build a bit differently so that we would have more control over the design process. We ended up approaching Paul Russell to purchase our own plans and put it out to builders to price – a mix of independent and group builders. This process helped us feel a lot more involved and in control of our build and gave us more transparency around pricing.”

It also led them to the team who would build their new home, Gareth Collins Building.

“It felt like a really natural decision and easy relationship from the get go,” says Shelby.

“We also felt closer to the project,” comments Kayne. As a professional painter he was able to work in with the build team about the best times to paint the inside and outside of the house so that it would fit in with their project schedule. He also laid the flooring, saving money and time.

“We came into it wanting to be really practical and make the most of the site, without over-capitalising,” Kayne continues.

“And also to build a funky home that has personality,” Shelby adds.

Their ‘must-haves’ included a well-designed living space and a big functional kitchen.

“They are so often underdone in smaller homes,” says Shelby.

“We wanted more connected living than the first home we built, where the dining space became a bit of a walk-through … it wasn’t really utilised – it didn’t function well.”

Having a covered outdoor space was really important.

The house has been designed to capture all day sun. All windows and doors in the living space go right up to the soffit to let more sun in and also give a feel of a higher stud inside. The covered deck allows light into the house, without overheating the living space in summer. In the cooler months, when the sun is lower in the sky, the living area basks in gentle natural warmth.

The couple have added a few touches in the home to make it a little bit special – like the cedar wall that Gareth crafted separating the front entry from the living area and the vertical cladding used behind the TV to add texture to the living room.

“Taking the time to collaborate on creative ideas and ensure clever use of space have given our house that extra bit of character,” says Shelby.

The sliders out to the deck meet at an internal corner junction, where there is no supporting pillar, so when they are open there is unobstructed space between the internal living area and the deck and garden (see Nulook ad P51).

“These doors provide a much bigger living space and we enjoy the sunsets and view of Paritutu,” says Shelby.

The kitchen, dining and lounge are all connected but have their own space as well.

In-built seats flank two sides of the dining table, allowing the couple to easily host six for dinner and up to 12 people for more informal meals and occasions.

The couple got the idea after meeting with builder Gareth Collins and his wife Tania, at their home, where they had a similar set-up.

There’s plenty of drawer space in the kitchen, including platter drawers in the ‘kick-space’ beneath the cabinetry.

There isn’t a traditional pantry as such – instead pantry goods are contained in three large push-to-open drawers across the front of the kitchen island.

“It’s super practical. Everything is easy to find, and access, in drawers. When cooking I can get everything out straight onto the bench,” Shelby says.

There are another three large drawers below the pantry ones, for small appliances, Tupperware, vases and the like.

“It was important to streamline the kitchen and hide appliances where possible, making the statement-piece gas range really stand out. The microwave is tucked in under the bench out of view and the dishwasher drawers are integrated with the kitchen cabinetry.”

Electric blinds control light and add privacy in the kitchen window, that acts as a splash back.

The couple has planted clumping bamboo palms outside so eventually, they will look out to a tropical lush green wall. It’s another clever way to connect the living area to the garden.

When it came to the actual build, the Poutus count themselves lucky.

The only issues with supply that they had, came near the end of the build.

“Decking, cladding … supply issues slowed us down but we weren’t in too much of a rush as we were lucky enough to be living with family,” says Shelby.

“You just have to carry on with what you can and then move your builders onto other sites until the product has arrived,” says Tania of the inevitable covid disruptions. “There’s nothing you can do but roll with it and Shelby and Kayne were so understanding with any hold ups with materials and subbies.”

“We were kind of between the two lockdowns, so it didn’t really affect the build time too much,” says Kayne.

“It all worked out pretty well.”

They were in their new home by August of last year – just in time to enjoy the second lockdown in their new home. “We were able to get the majority of our landscaping done while in hermit mode and had lots of time to settle in and get the house looking shipshape before we welcomed our first guests over!”

The bathrooms are one of the couple’s highlights, in terms of design.

“We focused on adding interest using different textures and geometric patterns on the tiles, rather than colour, to give the spaces a light, bright and more spacious feel,” says Shelby. The floor design included an alcove in both the ensuite and toilet room to house good-sized basins that don’t encroach on the floor space

Originally the couple was thinking of doing a black and cedar combo for the cladding but decided not to go for that when they sat at the site and looked around them at the surrounding neighbourhood.

“Everything around our build site was light and bright, so we opted for more of a beachy vibe,” Shelby says of the white fibre cement board finish. Plaster was used at the back of the house and along one side as this was more cost-effective. Both sides are relatively obscured, so it made sense to save money where they could. “And it’s nice to have the texture contrast,” Shelby adds.

Once the house was built, they admit they weren’t expecting the house to be set as high as it is.

The section was a lot lower when the couple bought it in late 2019 for $200,000. Most of the area was covered by a massive (and very unwell) Pohutukawa tree, which a friend helped them to clear.

“We thought the house would sitting very much inside the fence,” says Shelby.

“We realise now that being set higher gives us such a good perspective and enables us to enjoy the beautiful sunsets. We can see down the road, yet still feel private and tucked away.”

When it came to landscaping, Kayne was very anti having a lawn, with visions of precious weekends taken up with maintaining them, so the couple have opted for low maintenance plants and a very healthy-looking raised vegetable garden. The high boundary fence offers good shelter from any prevailing winds, and thoughtful design and textures create separate outdoor areas that are utilised at different times of the day or in varying weather conditions.

“Kayne has great plant knowledge so when I mocked up the landscape plan he was quickly able to point out if the plants would be happy in the spots I had proposed,” says Shelby.

One mature cabbage tree was saved during the site excavation and stands sentinel at the corner of the garden.

The couple has planted a lot of “hedgey” vegetation that will add privacy as it grows, as well as help cut down road noise from the arterial route the home is located on.

Both are looking forward to the next few years as the garden grows and matures.

“We actually had someone stop by not long ago and ask, ‘So when did you renovate your house?’” says Kayne. “It was quite a nice feeling to know that the house doesn’t stand out as a brand new build on the road – it fits into the environment nicely.”