Words by Will Johnston 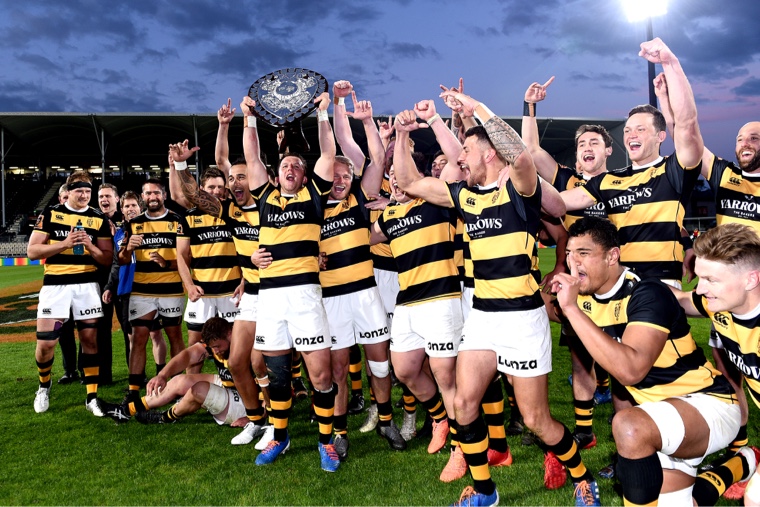 The Yarrows Taranaki Bulls caused one of the big upsets in this year’s Mitre 10 Cup when they beat the highly fancied Canterbury team in this year’s first Ranfurly Shield challenge.

With nine All Blacks in the home side to Taranaki’s three, the Bulls squeaked home by one point just minutes from the final whistle.

A timely move into Alert Level 1 for most of the country 5 days prior to the first shield defence ensured a sell-out crowd and things were looking promising.

However after an uplifting Shield Parade where even the weather cooperated, Otago reclaimed the Log O’ Wood for the South Island in a nail-biting match in Inglewood.

The 2020 Shield era was a highlight to get the Yarrows Taranaki Bulls off to a promising start. Now the Taranaki team has its focus firmly on gaining re-entry to the premiership division.

With no stadium to play in and a global pandemic to organise around, Taranaki Rugby has found the positives in the 2020 Mitre 10 Cup season. For the first time in many years, Taranaki fielded three All Blacks in their first game of the National Provincial Championship.

The TET Stadium and Events Centre in Inglewood became the new home for the Bulls after earthquake issues to Yarrow Stadium’s East and West Stands continued to hamper efforts to use its facilities fully.

For the past two seasons, the stadium’s safety concerns saw spectators watching from the ends or via limited seating sideline as the Taranaki Rugby Football Union (TRFU) improvised within the safety parameters to keep fans satisfied.

With the repair and refurbishment looming, pre-Covid, the decision was made at the end of last year to move all matches to TET Stadium, a venue that’s no stranger to rugby.

In 2012, it hosted a Ranfurly Shield match between Taranaki and King Country (won by the Bulls 57-16), in front of a sell-out crowd of 4,000. It has also hosted age-group representative matches, CMK Club Finals Day twice in 2018 and 2020 and many Inglewood club matches.

With a grandstand that can hold just over 1,000 people, spectators will be under cover to watch the Bulls earn a spot back in the premiership division.

TRFU chief executive Laurence Corlett acknowledged a lot of hard work has gone into getting the venue up to standard.

“It’s been a massive undertaking for our staff. The planning stage began last year and all steps of the implementation of our plan, including adapting to meet Covid level two requirements have been intense.”

Corlett said there were so many moving parts at play from setting up signage on the field, traffic management plans, to ensuring the corporate sponsors and supporters were all looked after.

“Cole Brown [Community Rugby Operations Manager] and Jimmy Fastier [Business Development mManager], along with their outstanding teams have done an exceptional job. They have certainly gone above and beyond what is in their job descriptions to ensure the Inglewood venue meets all expectations and requirements.”

He said the TRFU has worked with New Zealand Rugby and Sky Television, who have been very accommodating.

“We are fortunate that they allocated us daytime home games so that the lack of lights at Inglewood wasn’t an issue. Concessions like this have paved the way to a seamless transition from Yarrow Stadium to Inglewood.”

Scaffolding was built for Sky’s camera position above the pavilion along with a commentary booth and two coaches boxes, all on halfway.

The afternoon kick offs give the TRFU an opportunity to engage with families and makes attending more accessible for the South Taranaki market too.

They also collaborated with Shining Peak to supply a range of quality local brews for fans to enjoy at the venue. Shining Peak even made a ‘Taranaki Amber’ beer just in time for the season’s start.

Funders also assisted with the preparations. The Taranaki Electricity Trust pumped in $250,000 in May to upgrade public toilets, make repairs to the main uncovered stand, install a digital scoreboard and to add artificial turf to the sidelines.

Corlett knows first-hand that Inglewood locals are a ‘passionate lot’ and love Taranaki rugby after playing his junior rugby for the club.

“The support from the local community has been fantastic.”

He credits Kerry ‘Doc’ Austin and Gavin ‘Brick’ Midgely, who have led a group of volunteers to help make the dream of hosting Mitre 10 Cup and Farah Palmer Cup in Inglewood a reality.

The players are enjoying the nostalgic ‘grass roots’ feel to their games this season too.

“Obviously, there are a few team members like captain Mitchell Brown who are Inglewood men who think it’s golden. The team are enjoying the novelty of something pretty unique in this era of professional rugby. They have really embraced the grassroots feel of the ground.”

At Inglewood, the crowds can get close to the action and with the the Taranaki Maunga showing, nothing is better, Corlett said.

He also has a huge amount of gratitude for those who supported the TRFU, including their many commercial partners and members, through what has been a challenging period, with the loss of Yarrow Stadium and an uncertain future.

“The reality now, of a boutique ground hosting national rugby matches, is thanks to many Taranaki locals who looked to the positives, knuckled down and came up with solutions. We live in a pretty special place.”

Proud Inglewood resident and New Plymouth district’s deputy mayor Richard Jordan recalls the stadium being sold out for the 2012 Ranfurly Shield defence and said it was a ‘fantastic day of rugby celebration.’

“The chance to again adopt the Taranaki team and be its home venue is the talk of the town. The Inglewood community has a strong rugby tradition and are relishing the opportunity to get right behind the Taranaki Bulls.”

That support is evident, with amber and black bunting, posters, flags and the Bulls logo lining the main street. The public toilets even got a spruce up with a big poster promoting the season’s matches on its wall, led by Inglewood First’s Marie Pierce.

“There is no doubting Inglewood is very happy to be home to Taranaki Rugby and we are letting everyone know.”

Jordan said he is delighted the stadium can provide facilities of such a high standard which has been missing in the last two seasons with Yarrow Stadium’s woes.

On top of all if that, he was thrilled Taranaki won their first game against Bay of Plenty, with a 36-29 scoreline. Though most of the country was still in Level 2 at the time, the TRFU worked hard to ensure 1000 fans got to see the match.

“The expectations of a successful campaign, seeing our All Blacks in amber and black, probably the best Taranaki team for a few years, a full stadium of enthusiastic supporters, I just can’t wait,” Jordan said in anticipation of the region going into Level 1.

Diehard Taranaki supporter Craig Thomason said no matter where the team plays, its fans will follow. Under the circumstances with Yarrow Stadium, the TET Stadium is a ‘good rugby venue’, he said.

“Taranaki games played there in the past have been great occasions, with no lights, it’ll be day rugby which generally has a great atmosphere.”

Thomason said the team looks promising with plenty of Super Rugby players, some up and coming talent and the rare appearance of a few All Blacks.

“There is certainly the potential for a great season,” he said.

As for Yarrow Stadium, Corlett said having the venue accepted as one of the government’s shovel ready projects has been exciting for the Taranaki community.

“While we don’t yet have any definite dates as to when work will start or an estimated date of completion, we are hopeful that it will be sooner rather than later.”

With 3 games played so far, the remaining matches are: