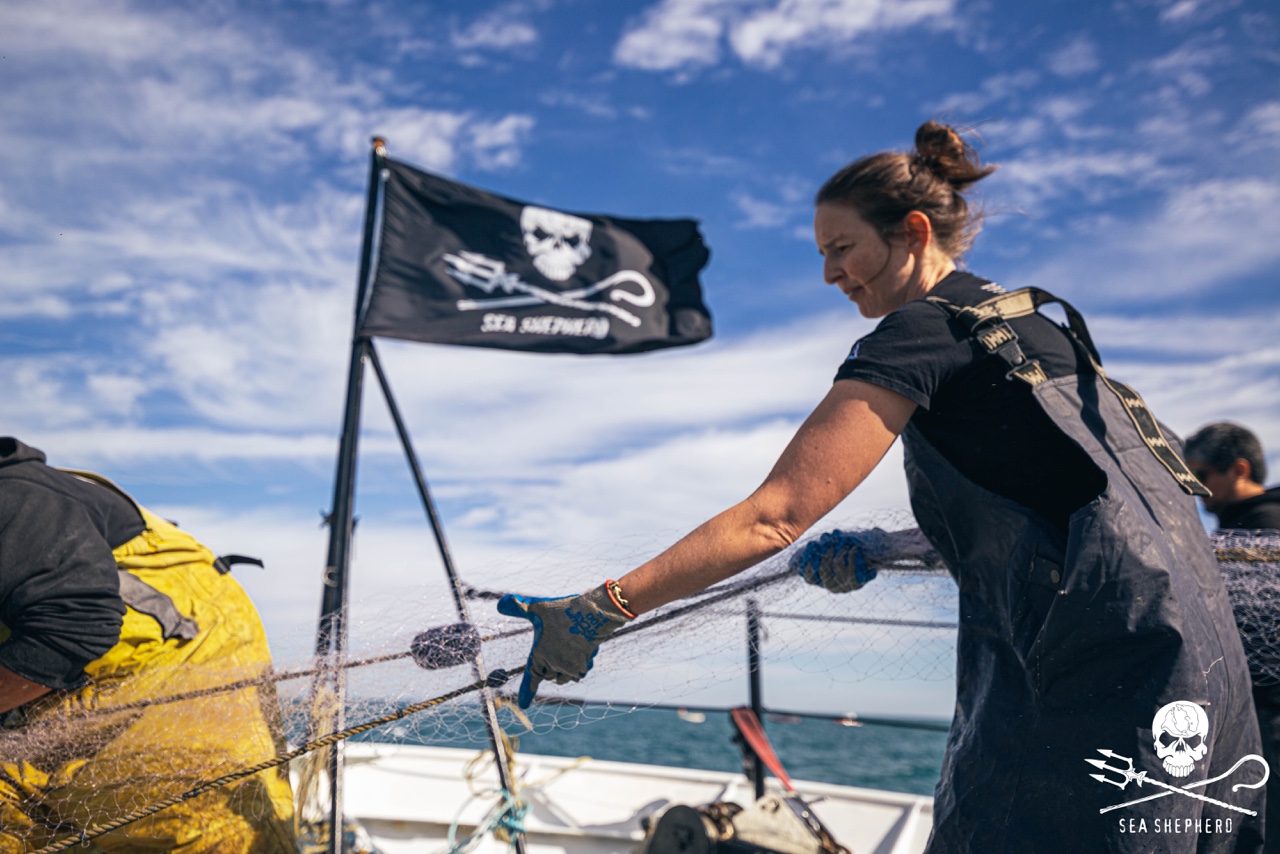 The 35-year-old former Taranaki woman is the crew co-ordinator for the conservation arm of the ocean saviours, and she couldn’t be happier.

“It is a dream come true to be part of the Sea Shepherd,” she says. “What in the world would I want to do other than be surrounded by people who give so much to keep the planet the way it is?”

Cameron Diaz, Rupert Murdoch and Farrell Williams were visitors to the yachts owned by the world’s wealthiest people. But as “staff” her association with the celebrities was purely professional.

For six years she worked on luxury crafts off Monaco, France, Italy and in the Caribbean, then one day Brooke decided she wanted a different life.

“It didn’t fit with my moral compass, but I loved being on the water. It was a wonderful experience.”

The ocean-going lifestyle also provided valuable training.  She won a table-decorating competition and the prize was a leadership course in super yacht management.

As part of their learning, students were presented with a scenario that opened Brooke’s eyes. “You pretend you are in a rocking chair, talking to your grandchildren and telling them what you are most proud of.”

That’s when she decided to quit and apply for the Sea Shepherd, whose ships she had seen and whose campaigns she’d closely followed.

“All roads were leading me to this one thing in life.”

For her first eight months with the marine environmental organisation, Brooke was a volunteer cook. Her job was to create vegan dishes for the 12 crew members aboard the ship, Brigitte Bardot.

“It was a tiny galley and it took 45 minutes to boil a pot of water. It was a definite culture shock coming from the super yachts,” she says.

The seismic lifestyle shift was offset by working with like-minded people focused on protecting marine animals.

Sea Shepherd, founded in 1977, runs ongoing campaigns to protect and save endangered species, plus prevent illegal fishing around the world.

“Last year we had 33 successful campaigns – a record,” she says.

There are two arms to the 11-strong fleet – the Sea Shepherd Conservation Society based around the Americas and the Global wing covering East and West Africa, and the Mediterranean.

Since August 2018 Brooke has been in a paid position managing the crews, volunteers, recruitment, payroll, logistics and human resources for the six Conservation Society boats. “I move from ship to ship,” she says.

Last year, she worked with 220 different crew members from 41 different countries, most of whom were volunteers.

“Meeting all the volunteers is very humbling. They give up a lot to come and do what they do. They are all amazing people from all over the world,” she says with an international accent, tuned by her worldly endeavours.

Home in New Plymouth on her Christmas break, Brooke’s head and heart is still with the Sea Shepherd.

Her partner is one of the ship captains, her T-shirt is emblazoned with the organisation’s logo and her mind is offshore saving the world, one marine mammal at a time.

One of the main campaigns the Conservation Society has been running is Operation Milagro, dedicated to saving the vaquita porpoise.

The world’s rarest marine mammals are critically endangered following rampant illegal fishing inside a vaquita refuge off the Baha Peninsula in the Gulf of California.

Poachers target totoaba, an endangered fish sought for their swim bladders. These are illegally sold at about $US20,000 per kilo for use in Asian medicine. “The poachers throw away the whole rest of the fish.”

The totoaba has the same habitat as the vaquita, so the gillnets become death traps for the small porpoises. There are only about 15 vaquita left and they are on the precipice of becoming extinct.

“The poachers just keep going because the rewards are so huge,” Brooke says. “If we could turn off the demand for the swim bladders…”

But it’s not all distress and destruction. In the latest vaquita survey, scientists counted six of the marine mammals. “That was absolutely amazing.”

The Sea Shepherd volunteers on the Farley Mowat and Sharpie are hands-on in their crusade to save the vaquita. They haul up the gillnets, each ship pulling in up to seven nets per day.

“If there’s a trapped animal in the net, we have a biologist on board.”

In the last five years, more than 7000 marine animals were pulled up in nets and 3900 were set free. If any animals are badly injured, the Sea Shepherd crew members are forced to destroy them.

“It can be upsetting for the volunteers if they pull in a net and everything is dead.”

When the nets are heaved on board, the lead weights are cut off and recycled as diving weights. The net material is used to make bracelets, which the Sea Shepherd sells through its online stores to raise money for the conservation cause.

There have also been clashes between poachers and the ships, but Brooke hasn’t been on board during an altercation.

Poachers have fired shots at drones, while trying to board Sea Shepherd ships in the vaquita refuge. “They are scary moments, but we have procedures in place. The captain will run drills, so everyone knows what to do.”

The ships are shielded by nets to protect them from Molotov cocktails and water cannons have been positioned at the front of each vessel.

Brooke says the ships have powerful motors, so under threat can head for shore at high speed.

They are also supported by members of the military, police and fisheries officials from the country whose waters they are guarding. Each ship has a handful of these Government personnel aboard and there’s usually a Navy ship stationed close by.

“We work with the Governments,” she says.

While she hasn’t been on board during confrontations, Brooke has been in wild water.

Luckily, she doesn’t get seasick, but once, in high seas travelling from Florida to Antigua she had a wee fall. “I was in bed and the mattress came out of the bed and landed on the floor.”

It was so rough, Brooke stayed where she fell, much to the amusement of fellow crew members who found her sleeping.

Because her work is mostly in front of a screen, she likes to keep in touch with the purpose of the Sea Shepherd by assisting volunteers on deck. She’s even helped pull up a few nets.

In her organisational role she works six-and-a-half days a week, mostly from 8am to 6pm, except on her short shift. “My whole world is Sea Shepherd… there’s no other job like it. There’s nothing else I’d want to do.”