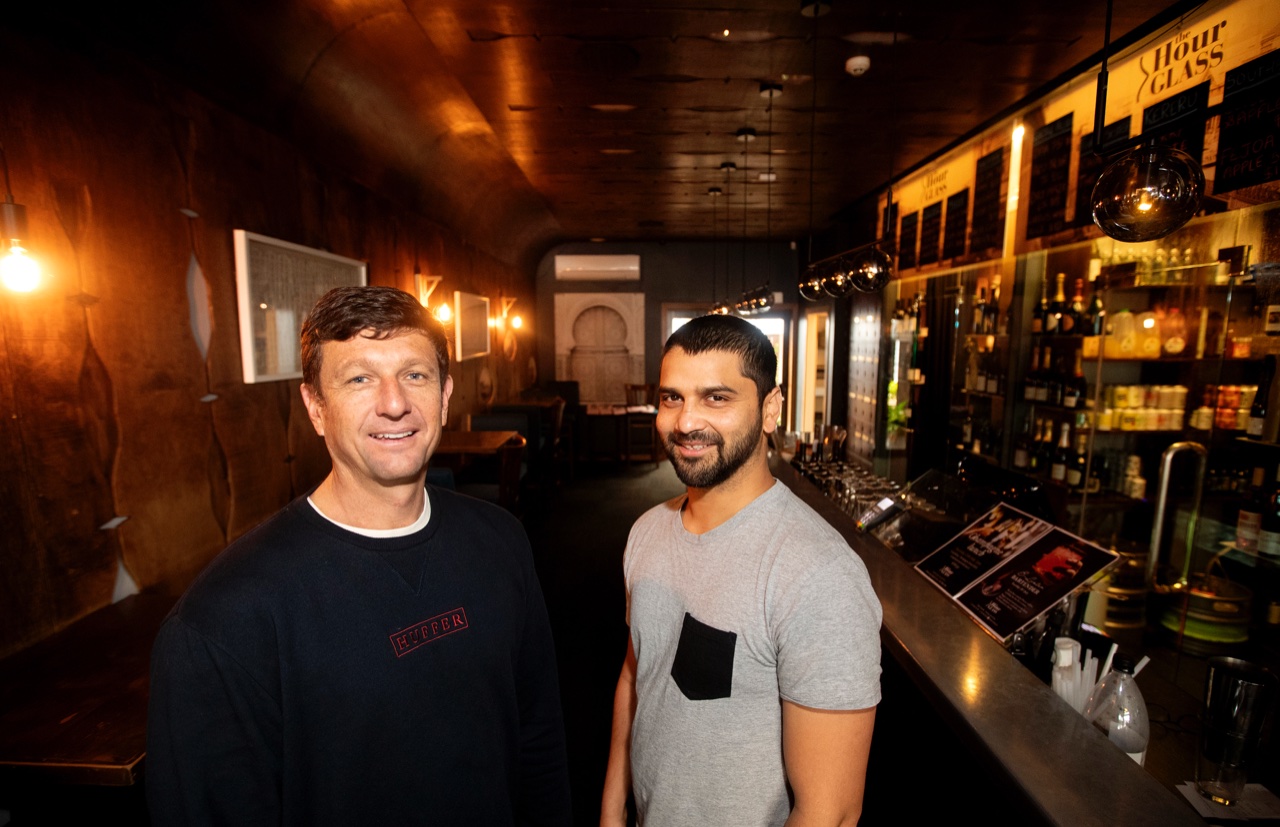 New Plymouth bar and restaurant owners say the best thing about the whole Covid Experience, has been the support they have experienced from their customers.

“What really touched me was the number of people  who reached out over lockdown,” says Mark Louis,  proprietor of Polpetta and The Hour Glass.

“People were getting takeout from us in Level 3 just to support us and help keep us going. We also got some really nice messages.” Mark pays tribute to the SOS Cafe scheme, launched by David Downs of New Plymouth. The idea was people could buy vouchers from their favourite restaurant, cafe or bar and redeem them once the Covid crisis was over. “That was awesome, we had lots of people buying those vouchers and it really helped.” June was a good month for both businesses — the Hour Glass was on a par with takings from June last year, while Polpetta was only about 10% down. “I think people are really keen to back their local businesses, “says Mark. “They’re also glad to be able to go out again, so they’re making the most of it. Plus they can’t travel internationally so I think people are treating themselves at home instead.”

Arborio stayed closed until Level 2. “We were unsure of demand for takeaway,”  says Marnie Johnston-Saywell, who co-owns  Arborio with husband Simon.

Since re-opening she describes trade as unpredictable, but adds that they are really grateful for the support from the community.

“That was really delightful and totally unexpected,” says Marnie.

The campaign continued with local people donating $200 to their favourite hospitality venture to help run promotions for customers, like a free coffee with every meal.

“We’ve had to adapt and change our hours,” says Marnie, “but everyone understands we’re trying to get back on our feet.

“Some people have said to us they have determined who they want to support because they want to make sure those businesses survive, so that’s been really nice. People have been kind and aware of what we¡¯ve been through.”

Marnie and Simon have enjoyed welcoming clients back and say it’s good to see groups of women catching up over cocktails to swap lockdown stories.

“Plus there have been a few people keen to enjoy a decent risotto or pasta,” says Marnie. It seems some of those home-cooked meals didn’t work out so well!

“I loved every minute of lockdown,” declares Terry Parkes, owner of Nice Hotel and Table Restaurant.

I hunkered down here and was able to rattle around in the restaurant drinking champagne and making wonderful dinners with my friends … their house wasn’t ready across the road so they stayed here.”

However he is mindful that for a lot of people it wasn’t great.

“Anzac Day was very poignant because of COVID. When we all stood out the front at six in the morning, it was very emotional because of the situation we were in,” he reflects.

Terry soon got sick of COVID and didn’t even bother watching the news, let alone the 1pm daily updates.

“I got so sick of the analysis … what we should and shouldn’t be doing … and the politics that crept in. I thought ‘who would ever know if we over-reacted or we didn’t. The fact is, we’ve come through it, we’re COVID-free and we’re back on track.

“I understand a lot of people have lost jobs, but can I be honest and say I don’t know very many?

“I have the best job for a Head Housekeeper at the moment. It’s a qualified position and I’ve advertised and still can’t find the right person. I tend to think maybe it’s because people are on subsidies and they don’t need to find work at the moment. Come the 20th of August, when all the subsidies finish, that might change and there’ll be a rush on jobs.”

To save money over the lockdown, he turned all the fridges off in the rooms and the monthly power bill went from $2,500 a month to $250.

“Obviously there was no heating needed or lights … I have 24 chandeliers and each has about 9 bulbs, so they were all off; the gas bill was down. I’m fortunate that I own the building, so my landlord gave me a holiday,” he smiles.

Like many hospitality businesses, Terry opened up again at Level 2.

There were a lot of extra costs like sanitiser and gloves, and keeping track of guests.

“In the dining room, having to have gaps in between tables so you could only have half the guests.

“But it was quite a happy time and you naturally wanted to hug people … there may have been the odd accidental hug,”
he confesses.

Initially the business had to open with limited hours.

“I had to reinvent a menu that didn’t have much prep and my chefs had difficulty adjusting to quick food because they were trained in fine dining. We did end up losing a couple of chefs because of that.

“As it turned out, perhaps the menu change was a bit of an over-reaction here and there and now we’re sort of back to a reformed menu of what we had, where you’re still getting the fine dining but it’s just not quite what it was before.

“So COVID’s been good for levelling us out and allowing me to really get back to what I want to do here — very good food consistently. I don’t want to do extraordinary food any more because the expectations are far too high, people expect more and you almost invite criticism.”

“There are things I’ve been wanting to do here but bookings kept coming in and it was very hard to change it.

“The accommodation side is doing very, very well — mainly in the weekends — we’re full, overflowing. Kiwis are travelling — mostly Kiwis who would have been overseas at this time.

“Over winter we didn’t really get overseas travellers anyway so we’re very fortunate to be getting what we have.

“I think this will be a better year than last year as far as occupancy goes, but perhaps not as far as income generated, as we’re finding people are negotiating rates and Kiwi’s will often bring their own breakfast and drink, whereas overseas guests don’t bring food.

“We’re definitely up on occupancy, but down on turnover.”

The biggest concern for all hospitality businesses that LIVE spoke to was ‘can the current support last?’

“We are all really conscious that though things are busy now there is still a long road to continued sustainability,” sums up Mark Louis.

But with the ongoing support of the community, Taranaki hospitality businesses are feeling cautiously optimistic, he says.