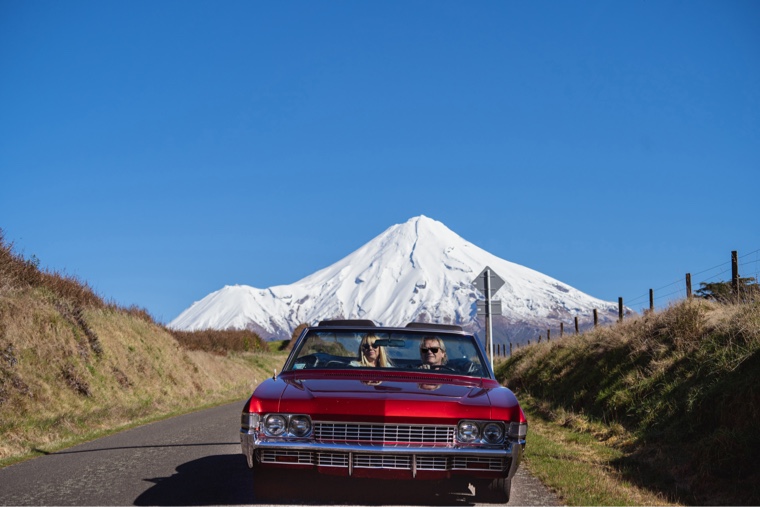 Post COVID, the nation’s economy was expected to tank.

Predictions from all economists were dire and New Zealanders hunkered down through Alert Level 4, preparing to cautiously pick our way through the forecast post-lockdown apocalypse.

But it didn’t happen.

Most people were far too busy to be doomy and gloomy — especially in New Plymouth.

Unemployment levels in Taranaki have actually dropped, while industries predicted to feel the pain most are bouncing back like a pogo-ing kangaroo on a trampoline.

For just the second time in 20 years, the country has a goods trade surplus — of $1.7 billion, as exports exceed imports.

Lockdown cabin fever and a surge of patriotism has seen Kiwis supporting their domestic tourism industry like never before, while $11.7 billion usually spent on overseas holidays is funding house renovations, spa pools, new cars and furnishings.

The nation’s economic forecasters could not have been more wrong.

Back in April, Infometrics predicted Taranaki’s unemployment levels to rise to 10.1% by March 2021.

Though we are still four months away from that date, so far 2020 shows employment growth — from 5.3% unemployment in the Dec 2019 quarter to 4.3% as at the end of June. There has been a slight rise in unemployment levels in the July to September 2020 quarter, to 4.5% but it still means figures are better than nine months ago and 95.5% of people wanting work in Taranaki have a job.

The bulk of job losses were forecast to be in accommodation and food services; retail and wholesale trade; transport, postal and warehousing; and construction.

Yet most of the people in those sectors that LIVE spoke to are all doing quite nicely thanks.

New accommodation provider, The Residence in Fitzroy, opened its doors in

September and they’ve already experienced periods of full occupancy, received repeat business, are fully booked over Christmas and New Years and just about full for January.

Domestic tourism is doing really well,” says Peter Tennent of The Devon Hotel. “Folk are travelling around New Zealand with abundance and occupancy rates compare favourably to the national average.

“Many of the guests have never visited Taranaki before and we’re seeing them return from a day out with designer bags, art from Koru Gallery, and the like. They are proud to support the local economy.”

Events like weddings continue to be postponed until extended family can attend from overseas, while international conferences are being rolled over to 2021.

“We can see by our retail spend data that Taranaki has answered the call to ‘Go Local’,” says Venture Taranaki General Manager Regional Strategy and Sectors, Anne Probert. Post-lockdown, Taranaki has maintained a higher baseline than the main cities and the spectre of boarded-up streets that loomed seems unlikely now.

“Soaring unemployment, a sudden termination of immigration, and falling house prices are set to slow new residential developments in their tracks,” their report in April 2020 warned.

Nobody seemed to have factored in the nationwide housing demand that is still years away from being met, nor the lowest interest rates that most of us have ever seen. With loan-to-value ratios dropped, first-home buyers had an opportunity to get into the market, while investors were getting very little interest at banks so sought to capitalise on the hot housing market, fuelling sales further.

The reality is house prices nationwide are breaking records, both in terms of price and quick sale times.

A new record was set for building consents in New Plymouth District during the July to September quarter with 600 compared with 432 for the same time last year.

This 28% rise was topped off with the highest ever total value of proposed building works at nearly $77m during October 2020 compared to an average monthly figure of around $28m in 2019.

New Plymouth District Mayor Neil Holdom said there had been a lot of positive feedback from a range of local businesses about the council’s cuts in fees and charges as part of its $20 million Back On Our Feet stimulus measures to help keep the building sector humming.

Though immigration doors are currently shut, New Zealand’s population continues to grow as a good portion of the country’s estimated one million ex-pats stream home.

With over 50,000 Kiwis already re-settled here since the COVID outbreak began,

Kiwi network KEA revealed the results of a survey in November that 250,000 New Zealanders plan to return home over the next two years, while a further 250,000 may come back in the years following.

A higher than normal percentage of returnees are looking to go back into regional New Zealand, with around 20 per cent planning to invest in a business.

Kea is urging Kiwis to see this as a once in a lifetime opportunity to rebuild the country post-Covid as returnees bring their global connections, expertise and capital back to the country.

GETTING BY WITH A LITTLE HELP

There is no doubt the government’s well-timed and executed Covid Relief Fund and wage subsidy has helped people weather the initial uncertainty the pandemic brought. It also offered a sense of comfort that kept people positive and more willing and able to cooperate with lockdown recommendations.

Similarly the New Plymouth District Council’s Back On Our Feet package was well thought-out and targeted at the businesses and organisations that initially struggled.

By the end of September 47 new applications were approved under the expanded Home Energy Scheme totalling $355k to support tradies.

Cuts in fees and charges for businesses like cafes, restaurants, hairdressers and house builders directly helped 752 businesses, while 410 procurements from local suppliers saw council spending up by $1.9m compared to the same time in 2019.

The NPDC approved $300K for the funding of grassroots groups in August and has also supported its commercial and community group tenants with nearly $56k in rent relief, plus a further $165k to help small and medium businesses.

“This is a great way to keep our town centres vibrant and give a helping hand to shops, restaurants and cafes,” says NPDC Deputy Chief Executive Kelvin Wright. “Beautiful buildings and town centres help bring in people and keep the tills ringing, and the upgrades also help keep tradies in work.”

According to TIA (Tourism Industry Association), total tourism expenditure in New Zealand during 2019 was $40.9 billion a year — $17.2 billion of that was from international tourists, and $23.7 billion from domestic tourism.

Logically, if every Kiwi went on twice as many local trips/holidays as they normally do, the 2020 tourism take could still exceed $40 billion.

And after lockdown many of us have been itching to see new places and faces.

Results of an MBIE survey in September saw tourism spend increases in seven regions when compared to September 2019. This includes the largest increases in Northland (up 30%) and Taranaki (up 22%).

The fact that Taranaki only ever has around a 3% share of the international tourism pie, means we are less affected than regions who relied on international visitors for their economy, says Venture Taranaki’s Chief Executive, Justine Gilliland.

Then there’s the $11.7 billion Kiwis usually spend on their overseas holidays each year.

New Zealanders are choosing to invest those funds in their homes or cars instead, or upgrading their New Zealand holiday experience — essentially becoming a five star tourist in their own country and perhaps experiencing their own nation like never before.

The recent Taranaki Garden Festival in early November was the most successful ever.

“There was no accommodation left in New Plymouth during the 10 days. The i-site in New Plymouth was having to send people to outer areas – Kaponga, Waitara etc for them to stay.”

Similarly, the forced change of date for the Taranaki Arts Trail turned into a real blessing for the seven year old event. Normally held for three days in June it was held for the first three days of this year’s Taranaki Garden Festival in late October.

“Artists revealed this year’s visitors were a more engaging audience than years before with many lengthy discussions about their art and processes.  This manifested in a significant increase in sales.”

Venture Taranaki is using the interruption to the region’s tourism industry by COVID-19 as a strategic opportunity to explore our tourism and visitor attraction opportunities in the region.

A  multi-faceted domestic tourism campaign for the Spring and Summer markets is underway.
Initially Venture Taranaki focused on the visiting friends and relatives (VFR) audience, challenging the people of Taranaki to support our region with an ‘Ultimate Taranaki Get Together’ social media competition.

Visitors to Taranaki spent an estimated $380 million in the year ending August 2020. Though this is a decrease of -9.3% from the preceding year, when you consider the whole country was in lockdown for seven weeks, with our biggest domestic market unable to travel for a further three weeks during that period, the results are very encouraging. Compared to Auckland, which is looking at a decrease of -20%, Taranaki has fared better than others.

“Overall, our Taranaki economy remains resilient, though the data supports the need for job retention and high-level skill redeployment and attraction, to help ensure both stability and sustainable growth in our employment rates,” says Justine.

Regional GDP, the traditional measure of economic activity in Taranaki, rose to $9.3 billion in the year-to-end-August 2020. Taranaki still ranks as one of the highest rates of economic activity per capita in New Zealand, largely due to our strong food and fibre sector, which is our biggest GDP earner and to date largely unaffected by COVID-19.

“New Zealand’s food exports mean that we still have a large connection to the outside world. Revenue from these exports is putting food on the table for many families in Taranaki,” explains Justine. “Our region, with its strong dairy and red meat sectors, is well placed to take advantage of increases in global demand, as well as high-value sectors such as Mānuka honey and specialty foods.”

The consensus from the region’s businesspeople at the TSB Chamber of Commerce Business Excellence Awards held In November seemed to be that the key to Taranaki’s resilience and New Zealand’s recovery is to keep on top of COVID.

“The regions seem to be doing better than the main centres and Taranaki is humming and looking quite positive.”

“People are celebrating the fact we can get together with friends and family, go shopping, have our schools open and be able to work,” says Peter Tennent.

“This isn’t happening anywhere else — it’s a lot rosier in New Zealand than other parts of the world.

“And if we’re stuck here for a while yet, well it’s not a bad place to be stuck in is it?”

“These may be people returning to the region, or others who have been made redundant because of COVID,” says project manager, Brad Kisby.

“We have over $800 million worth of construction happening in Taranaki over the next four years,” he points out. “We need 450 people alone to build the new hospital. The Chamber Hub is a place to facilitate that demand and get local businesses collaborating on big projects so that the money stays within the region.”

Brad has already placed 40 people into new roles since The Chamber Hub started.

“A lot of our work has been in setting it all up … we’ve been building the plane and flying it at the same time.”

The Chamber Hub will be operating from dedicated premises at 10 Corbett Road in Bell Block from the 1st December. Businesses trying to source skilled labour or people made newly redundant should contact brad@taranakichamber.co.nz to register their interest.