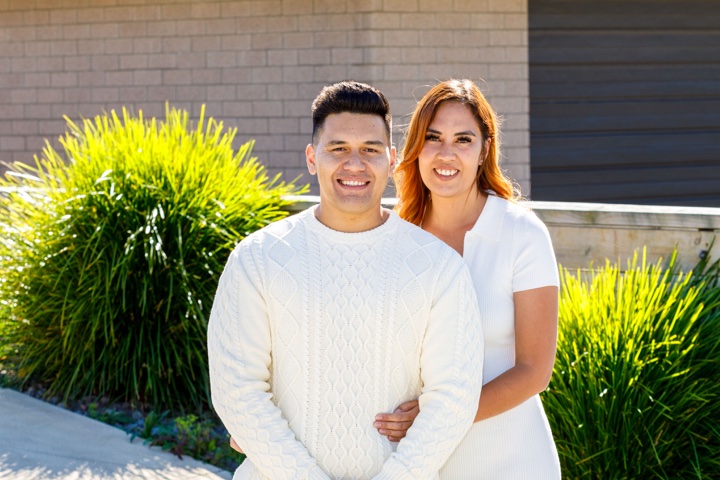 Hush has filled the space where guitars and the voice of Caleb Haapu were once heard. The former Sons of Zion lead singer has had his recording studio converted into a one-year-old’s bedroom for the necessity of a good night’s sleep.

It is one of the sacrifices Caleb has made in the switch from touring with his chart-topping reggae band to focus on his solo label Tobias, become a family man and now fitness buff.

“We have been chasing my dreams for so many years and toured to different countries, but it wasn’t working. You kind of have to grow up.”

Where better to grow up, than school?

Caleb, 32, and his wife-turned-manager Kendyll Haapu, 26, are sitting in the old music block at Spotswood College when we meet.

It’s where they have both completed their first term as teachers.

But at first, his students had never heard of him.

“The parents are buzzing out,” he laughs. “The mums are huge fans.

“Then the kids started asking me everything, from how much money do I earn, to what’s the biggest crowd I’ve played, what famous people do I know, and I can take them with me!”

Caleb, 32, teaches music at Spotswood for eight hours a week. The couple are the alumni’s newest recruits, a bundle deal that must be making principal Nicola Ngarewa swoon.

Kendyll was completing the te reo component to her teaching degree, which she won a scholarship for, when she was invited to take up a digital technology role.

She was reluctant to commit fulltime while their youngest, Joshua, was still a baby. But she was assured her teaching hours could fit around the needs of the couple’s three children.

Kendyll was finally convinced, thinking Caleb would be the at-home dad, but then he was invited to teach too.

They were not ready to put Joshua in day care, but the school’s response was to bring him to class.

“I thought, is there nothing I can say to put them off?” Kendyll laughs.

“Every possible out became a ‘yes’,” Caleb agrees.

Stepping aside from the band that saw his song Drift Away top the New Zealand charts for weeks on end, has opened doors for Caleb to not only be more present in his children’s lives, it’s also given him the opportunity to go solo, and focus on his health.

Being on the road took its toll on Caleb, who weighed 164kg at his heaviest.

While crash diets had worked when he was in his 20’s, they were no longer cutting it.

Caleb made headlines, and his F45 gym buddies proud, through a dramatic weight loss of 59kg in just over 12 months – losing about the weight of his wife.

It was Kendyll who kickstarted Caleb’s health journey, acknowledging he was at his heaviest on their wedding day five years ago.

“I used to lose weight to look good. Now it’s because I want to be healthier and live longer, I want to be able to play with my kids,” Caleb says.

With Kendyll’s encouragement, Caleb was able to push the crash diets aside and make a lasting change through a gentler, more sustainable lifestyle.

“I got rid of all the food in our cupboards, which I cried over because I’m such a pig,” she giggles.

“We switched to different bread and milk.”

So far, so very good. Caleb is the family cook, with pasta being his signature dish. He learned the “old school” way of cooking passed down from his grandmother who was a chef.

But now he only affords himself a sneaky spoonful of what he’s cooking his family, while his batch meals are prepared in advance.

Chicken or fish with rice and veggies for six nights, with a cheat dinner of Friday night takeaways.

“I just rinse and repeat that each week.”

Sticking to three set meals a day, cereal for breakfast, and a sandwich or soup for lunch, along with a six-day-a-week gym routine, has been key to him losing weight.

While he grew up with soft drinks, biscuits and chips readily available, now his household sees none of that except for as a special treat.

“We get the kids a Happy Meal and it comes with a blackcurrant juice, and they are so excited. Whereas when we were kids, we would have been asking, where’s the fizzy?” Kendyll says.

So enamoured with his new lifestyle, Caleb is studying towards a National Certificate in Sports Medicine to become a personal trainer with F45 Training gym in New Plymouth.

Life today looks a lot different from the rock ‘n roll days on the road of old, but Caleb has never been happier.

“I told Caleb if you help me with what needs doing, I can help you achieve anything,” Kendyll says.

With a fresh new solo career under the name Tobias, Caleb is enjoying the freedom of creating music and an image that is uniquely him and seeing where that takes him.

He’s released two singles, One Love and One Night at the time of this interview, with Kendyll starring in the music video they co-directed and co produced for One Night.

“I said if I’m going to do this, I need clothes, hair… I wanted to hire an actress.” But Caleb didn’t want to act out romantic scenes with anybody else.

Kendyll is Caleb’s manager, taking charge of all the administration including booking recording studio sessions, organising recordings, checking emails, applying for funding, and making sure that everyone is where they are meant to be and when.

She’s also revisiting a teen passion by adding a photography paper to her degree, so she can take promotional photos for Tobias.

It was through music that the couple met, so it makes sense that music continues to be a shared passion.

Caleb was on the J-Boog NZ Tour with his first original band L40, when he met his wife.

“I wasn’t going to his show, I was at home in my ‘jamas when my best friends came over and said, “we’re going”. They always remind me that we wouldn’t have met if it wasn’t for them.”

After eight months of long distance, Caleb was convinced to leave his Whanganui home and pack his life into a car and move to New Plymouth to be with Kendyll. That was eight years ago.

So strong is Caleb’s belief in his wife, that he is keen to keep as much of the production and promotion for Tobias in-house, with Kendyll at the helm.

The lyrics to Tobias’ soon to be released single Everywhere I Go is a tribute to his wife.

“It’s about being on tour, never being home, and your partner who holds it all down while you’re gone,” Caleb says.

“It talks about, although I am gone and I am never home, I always take you with me.”

Tobias has the creative genius of good friend and Sons of Zion bass player Matt Sadgrove writing and accompanying Caleb. The dynamic duo wrote the band’s biggest hits, so it’s fitting that the two are working together again.

“Tobias was a lone ranger, and that’s what I’m doing.”

Caleb’s children Aria, four, Elijah, two and Joshua, one, are also named from the bible, following on from Caleb’s late father, who named him and his siblings after biblical figures.

So how are husband and wife managing to each work, study, and launch a music career while raising three preschool-aged children?

Caleb and Kendyll are juggling Joshua between them as they talk.

Caleb chases Joshua around the room at times and distracts him with colouring-in, while Kendyll settles him to sleep with a breastfeed and jostles him into a front-pack where he continues to snooze.

Each day consists of dropping the older two children to their various daycares, before heading to work. Afternoon downtime before daycare pick up, is set aside to study te reo for Kendyll and his personal training certification for Caleb, plus song-recording and management.

The couple are motivated to give their kids the best start in life, including through school.

As we chat it becomes apparent that Kendyll is nervous about her choice of primary school for Aria, who turns 5 next year.

Her own experiences at school, where she felt maligned, motivate Kendyll to make Maori learners’ school experience better than hers.

Kendyll was recently awarded a $15,000 Kupe Scholarship for Maori leadership, diversity and being a true role model.

“I was academic, but I would be kicked out of class for finishing my work early and being ‘disruptive’, along with other Maori students,” Kendyll says.

“I chose this school for their sporting reputation but I did not think they would deny me as an academic. It makes me sad how it still affects me today.”

Here’s where her passion for teaching Maori students in English medium schools is so evident.

It’s the end of term one and it will be interesting to see what impact the Haapus have already had on their students.

Kendyll is sure of one thing – there are bound to be extra enrolments for music classes.

But Caleb is adamant he’s just part of the package deal, and that Kendyll is the true asset to the team.

Herein lies the secret to the Haapus’ success – it’s evident they value, love and revere each other above themselves.

“I give all credit to my wife,” Caleb says proudly of Kendyll. “I’m just the talent.”