They say there’s something in a name and there’s no denying how this impeccably restored New Plymouth period villa continues to ring true to the identity it was given by its creators back in 1899.

Set back off one of the city’s main western streets, the sense of history, peace and wonder that pours from Whareora (house of wellbeing) is something quite magical.

While the grand lady’s honour had somewhat slumped in recent times, the love and attention given to it by homeowners Carey and Sally Davis, and building team Icon Construction and Renovation, has revived a home the Davises couldn’t be more content with.

“We all have a sense of pride over it,” says Sally.

“It’s not just our home. It was a project that’s become our home, but I think everybody involved was really into it. It was such a big journey that we all went on together, and to see it now is really satisfying and humbling.”

That journey began with close friends of theirs, who provided a glowing open home review that convinced the Davises to purchase the home sight unseen, while living in Indonesia.

“We’re still being repaid in wine from them for that review,” jokes Carey, reflecting on the sheer scale of the project they embarked on.

Icon Construction director, Andrew Bell, says the 120-year-old home was rundown and in desperate need of either a bulldozer, or some tender love and care when the Davises purchased it at the end of 2015. He couldn’t be more pleased it was the latter.

“You would honestly shed a tear if something like this got bulldozed.”

For Carey and Sally, who were used to building new, the desire to renovate a home of heritage and character trumped any challenges they would potentially face in terms of time and resource.

“I think it’s so important for the city to keep its history as much as possible. Once these buildings are gone, they’re gone, along with all the stories with them,” says Carey.

Their brief to both Icon Construction and Gibbons Architects was to bring it up to “the now” while respecting its historic features, and to add space where needed.

That resulted in an even mix of renovation work, and an extension which tied into the home’s origins, yet had the modern features necessary for practical living.

Icon Construction director, Steve Bell, says the attention to detail that the project required was the greatest challenge, yet also the most rewarding aspect to look back on.

“We had to know and understand how the original building was constructed, so we could replicate that with modern techniques and products that would meet current standards and codes, without taking away that historical look,” he says.

“There were a couple of areas that needed remedial work due to the age of the building, and we were able to get those components machined to match the original items, to ensure the repairs were seamless.”

While a dilapidated front verandah was completely restored, those specialist techniques were also used to create a flawless flow of timber panelling, skirting, cornices, and turned feature posts to connect the original 255m2 home with its recent 73m2 extension.

The “friends and family” entrance at the rear of the home is a major part of that extension and leads you into a breathtaking kitchen and dining nook, where Sally says the majority of their family living and socialising takes place.

Moving the kitchen from its original dark and dreary spot at the south side of the house, to a now light and airy north-facing position was a must-do, she says.

“The entire home had such a nice feel to it from the get-go. The original builders clearly took into consideration the sunlight and where it comes from. It’s a warm and well-positioned house, but that original kitchen was just freezing.”

A mudroom featuring an original hatch door that was relocated from the old dining roommakes it easy for the couple’s two teenage boys to send their sports gear flying into the laundry when they arrive home. Completing the interior extension is Carey’s “piece de resistance” – a wine room where one instinctively feels the need to linger.

French doors from the additional rooms offer an easy flow onto a large 75m2 deck with rolled roof verandah – another seamless historic touch from Icon – and a double garage with roof deck giving the family ample space for outdoor living and entertaining in the all-day sun.

While Carey’s favourite room is easy to identify, Sally says the space she enjoys most is the dining room situated just inside the home’s front entrance.

“In terms of form it has to be my favourite. The big windows, the light and the new ceiling that Icon put in to match the existing one is really beautiful.”

A bespoke, three-tiered light Sally bought while living in Indonesia hangs above the dining room table, giving the room an eclectic elegance that sets the tone for the rest of the house.

Across the hallway was the original office and bedroom which has now been transformed into a heavenly, modern-meets-tradition master suite complete with walk-in-robe and ensuite. An original staircase leads you to level two and a second living area with expansive views across Partitutu, along with three bedrooms and a bathroom. All but the bathroom have largely remained in their original state, simply redecorated and styled in line with the rest of the house.

While the walls of the old home could no doubt do some talking, it was a note Icon found in one of them during the build which gave the new owners a glimpse into its history. Written by Tony McMahon, who moved into the house in 1976, the note talks about the time he spent sliding down the banister – an action now replicated by Carey and Sally’s own boys – playing table tennis in the front room and fetching rogue tennis balls off the steep, pitched roof.

“That is still the original banister so we certainly know that it’s a sturdy piece of work,” says Carey.

Dating back further, the Davises discovered through Puke Ariki that the Frank Messenger-designed home was built by Hal and Annie Goodacre in 1899 and featured a tennis court, stables, and wharenui on the section, which had strong links to Parihaka. Goodacre was known in town for the establishment of the Egmont Boot and Shoe Company, and was also instrumental in the early development of Pukekura Park.

“It’s amazing to think back on the stories,” says Sally.

“We feel like we’re now adding our own chapters to the history of the house which is pretty special,” adds Carey.

Sally says working with Icon Construction on such a major project made it all possible, as well as enjoyable, thanks to the company’s attention to detail and open communication.

“The unique software and app Icon uses was such an essential tool for our project. The way it tracked costs and timelines, and recorded conversations or details between them, us and sub-trades or third party suppliers, was invaluable.  If a quick decision was required, John, our project manager, could upload a photo or diagram explaining the options and we didn’t necessarily need to be on site.”

With a number of skilled, double-tradesman on their team, the passion for finishing and detailed touches was second nature for Icon Construction.

As well as a complete redecoration of the entire home alongside sub-trades and Sally, who oversaw every colour, fabric and finish, Icon facilitated the retro-fitting of double glazing to the existing timber joinery, as well as the installation of a gas-fired radiator system throughout, adding to its warmth and comfort.

Both Steve and Andrew say the project was a huge undertaking and to do it right took a lot of time, effort and commitment from everyone involved.

“I was always excited by Sally and Carey’s vision for the home and it was great working through and finding solutions to some of the challenges the old home had been working on for the last 100 years,” says Steve.

“The overall finish and tie-in of old versus new is amazing. They’ve finished the whole look off with great exterior paving and planting to make it a complete package.”

“To sit here now and reflect on the journey is pretty awesome. It’s quite emotional really. We’re certainly proud of it,” adds Andrew.

Their sentiments about the 14-month-project are echoed by the Davises.

“The whole process was quite overwhelming, but we’re really proud of what Icon achieved, what we’ve achieved as a group and how we’ve transformed the house and brought it back to life,” says Sally. 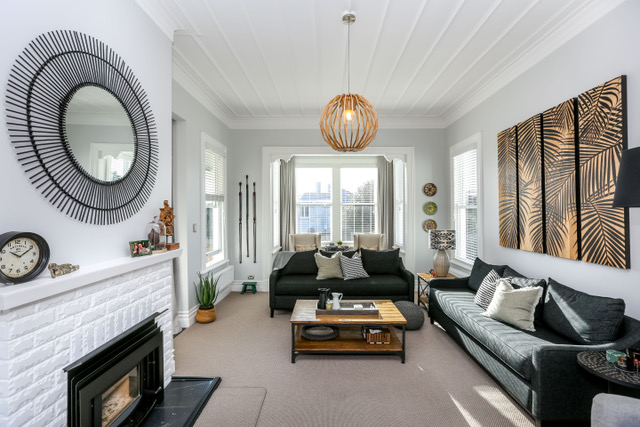 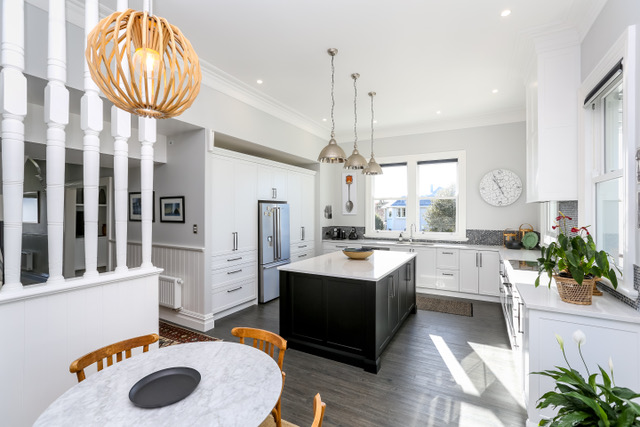 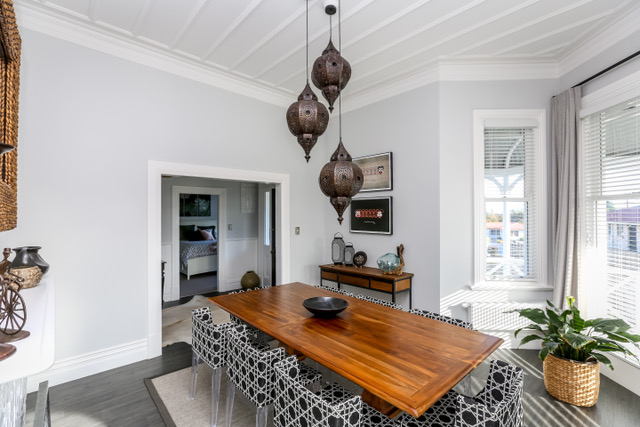