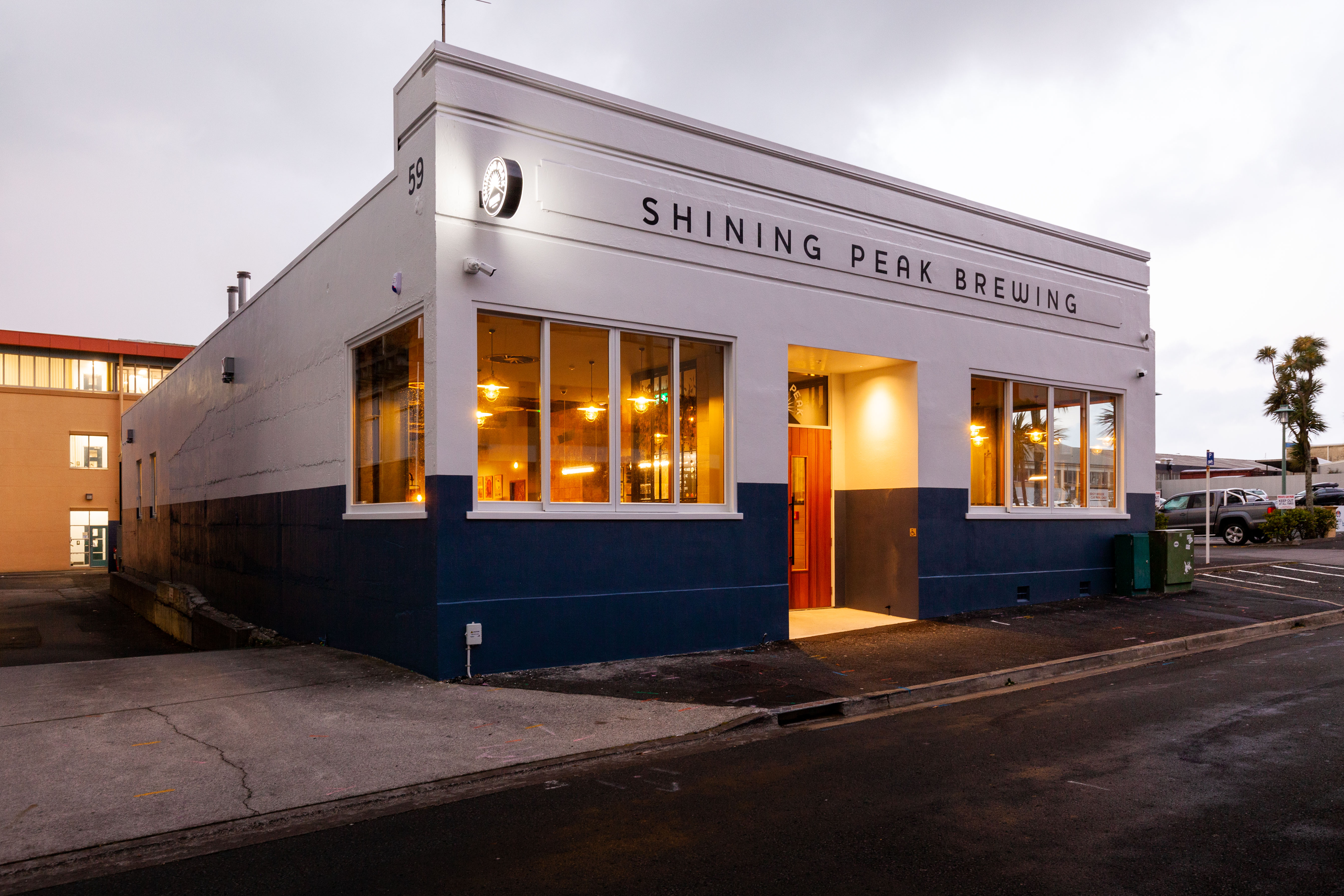 It’s not only the ale at Taranaki’s newest brewbar that is full of patriotic hues. With a name that pays tribute to the region’s origins, a collection of brews that celebrate some of its quirkiest local legends, and a business model dedicated to giving back to the community, Shining Peak Brewing is well on the way to becoming a household name in Taranaki.

Opening its doors to the public earlier this month, the brewery has a star-studded team behind it focused on creating a world-class experience for their visitors. Equally as important, is their desire to contribute positively to the community, both financially and socially.

“Historically, a town’s local brewery played a huge role within the community, nourishing people with beer and a place to socialise and meet others,” says head brewer and co-owner Jesse Sigurdssen.

“We plan to be that hub and also provide support to many local community projects and causes by donating five per cent of our beer revenue to a different organisation, each month.”

With that monthly figure estimated between $3000-$5000 per month, the donation would be a significant boost for any organisation, however, the Shining Peak team has found it challenging to find recipients.

Co-owner Dan Radcliffe says the tricky part about being a brewery and trying to do good socially, is that the two are often seen as being mutually exclusive.

“We don’t think that’s necessarily right. There’s no denying alcohol in New Zealand is mismanaged by a lot of people, but Kiwis are social people and I don’t see us not drinking any time soon, so management and education in the alcohol space is critical.

“If we are going to drink beer, then let’s not only use it for profiteering by companies, let’s use it as a force for good. We’re determined to prove that done right, and run responsibly, a local brewery can have a positive social impact on its local community.”

The Mellowpuff Trust will be the brewery’s first beneficiary, and will no doubt be grateful to be on the receiving end of opening month takings.

Joining Radcliffe and Sigurdsson as owners of Shining Peak Brewing are Radcliffe’s wife Rene, Sigurdsson’s partner Kaila LeMaitre, and Taranaki hospitality guru Ajinkya (AJ) Jagdale and wife, Kate. With their powers combined, they are a vibrant and well-oiled machine that has had a lot of fun developing the stories behind their brand and produce.

The name “Shining Peak” pays tribute to the original translation of Taranaki, which the team agreed would be a nice way to pay respects to their beloved region.

“There is endless fun that we can have with the stories behind our beers as there are just so many amazing stories and personalities that have come out of our region. After reading through Puke Ariki’s database and long library research sessions, we have come up with some great ways to give our beers identity and can’t wait to keep finding more,” says Sigurdsson.

Whether it’s a dark lager, pale ale, or raspberry berliner weisse on your taste list, you can be assured it’s been brewed by an award-winning brewer, using world-class equipment.

Sigurdsson says they wanted to get things right from the start, so invested heavily in a brewing set-up from Premier Stainless, out of San Diego. While at its core it remains a hands-on brewing process, the quality and efficiency of the equipment is guaranteed.

“And it’s really nice and shiny,” he adds, bright-eyed.

As the head brewer, Sigurdsson says he’s most excited about letting his creativity do the talking and ensuring he brews his unique recipes to the highest possible standard.

“I’m also looking forward to the collaborative side of the brewing industry, working with other breweries and showcasing our product at great beer events.”

While the beers are a major focus of the brewbar, there is also a high-performing hospitality line-up that will support Jagdale in delivering quality food and service to their patrons.

Paying tribute to the amazing Taranaki hospitality scene, Shining Peak knew it would need to pull out all the stops to ensure it would continually push the current regional standard.

Open seven days a week, the brewery combines indoor booth seating with traditional dining options, a bar and tasting section, as well as a slick garden bar courtyard with retractable roof to ensure they can let the beautiful weather in, and keep the horrible weather out.

The architecture was executed by AJ Sutton of Metropolitan Architecture Studio, while New Plymouth’s Tilt Design completed the interiors which are designed to celebrate the raw and earthy brewing process. Natural materials and warm lighting contrast with steel features, while texture and greenery have been layered throughout, to provide comfortable and intimate areas for customers to soak up the magic.

Sigurdsson says with aspects of the craft beer market becoming somewhat flooded of late, he hopes their brewpub model will offer a unique experience.

The establishment will be selling growlers of beer which have been deemed “the way forward” in beer retail. Growlers are generally the most economical, freshest and sustainable way to buy beer, with the added perk that you can often try the beers before you decide on your fill.

“The industry has recently become a lot more localised and the brewpub model is more favourable as people are learning more about beer, while that freshness is also critical.

“We really want to champion that freshness aspect, while also making sure we have fun, be creative and keep things interesting for ourselves and our customers.”