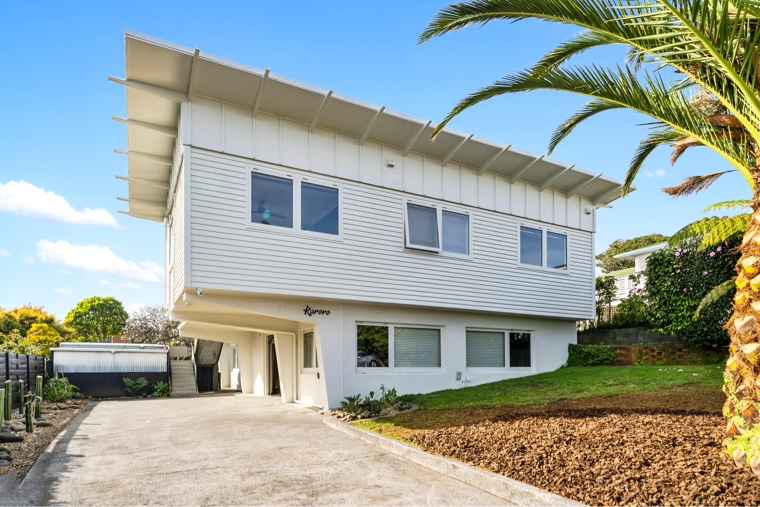 It was the first time entering the prestigious competition for Hubbard Building, which owner Horry Hubbard started back in 2014.

“You sort of need something a little bit different in the renovation category I think. Something that is a little bit harder to do than your average build, to showcase what you are as a building company.”

You also need a home owner willing to participate and help supply the necessary paperwork.

“To get a gold award was our aim — to have that house judged to be at a high standard, because that’s what we’re about. So to get that gold was all I was worried about. Then to get the other accolades was a bonus.”

To secure a gold award the house has to score 80% above the industry standard and this home scored well in excess of that.

Not only did the house win its category (Renovation under $500,000), but also the Supreme Renovation and the Lifestyle Award for the kitchen. “I didn’t even know we were in that category to be fair, so that was a real surprise.”

Held during November at The Devon Hotel, because of the uncertainty with COVID the event was held virtually.

Each entrant was limited to a total of four people to attend the evening, and proceedings were pre-recorded and then played to the audience.

“I quite liked it in a way. I’m not really one for sitting round in a suit for hours on end, doing speeches and that sort of thing,” admits Horry. “To mingle with other builders you knew who had entered as well and have a couple of beers, the presentation part was all done in half an hour.”

Horry and wife Kylee took two of the staff who worked on that job. “They’re as much to thank for that property as what anyone is, you know? They’re the ones who have worked on it. It was good to show them how their work was recognised.”

Once all the regional competitions concluded, the judges announced the Top 100 homes for the country. This is the 100 homes in the competition that scored the highest points.

That was the icing on the cake for Horry, to be ranked alongside multi-million dollar new builds and other homes from all the various categories throughout New Zealand.

“I thought that was pretty cool for a half a home renovation sort of thing.

“Taranaki actually featured really well (at the national awards),” reflects Horry. “Out of 11 homes that were entered (in Taranaki), five of them made it into the Top 100 of New Zealand. I think that’s awesome.”

Built in the 1960’s, when New Plymouth homes were generally lacking some level of originality, this mid-century modernist home paid homage to the post and beam houses of Palm Springs and was built with interesting features, full height windows, and a butterfly roof.

The original home owner was the late Laurie Cleland, a prominent builder in New Plymouth at the time. It was his family business, WJ Cleland & Sons (now Cleland Construction), who built the house.

After 60 years the home was getting tired.  The modernist roof design had started failing, leaks had appeared in at least 3 places inside the lounge and the central gutter had been overwhelmed more than once flowing through the ceiling into the upstairs guest bathroom.

It became apparent that the roof structure ideally needed to be completely replaced to provide a trouble-free assembly.

“The roof structure was pretty unconventional,” says Horry, like nothing he had ever seen before, nor anyone else who came on site.

“It had like straw panels as the roof structure on top of exposed beams and the straw part was disintegrating.”

Given the extent of the works required to replace the roof structure it made sense to look at the entire living space and come up with an overarching plan that could be worked towards.

Michael Mansvelt was employed to cast his eye over the scope of works and provide a concept for the kitchen, lounge, dining, furnishings and landscaping.

The renovation was to be true to the modernist roots of the home, new timber joinery would replace the old, and the furnishings and fittings would pay homage to the home’s mid-century beginnings.

The entire eastern upper level was demolished back to the floor level and rebuilt – nearly 100m2 of home.  It was more than a simple renovation — it was a rejuvenation of a critical area of the home.

To achieve this to the quality determined to be fitting to this iconic home, all the walls were re-framed and the new roof structure let soar above that.

“We always knew the roof was going to have to come off, but once we took it down we could see the outside walls were really bent and twisted. So instead of spending time trying to rectify the old framing, it was easier and ultimately more cost-effective to take that whole section of the second floor off.”

That section amounted to about two thirds of the upper storey of the house — only the three bedrooms, that sat in a line along the upstairs front of the house remained standing.

Once demolition started, Horry discovered the walls were constructed in an unusual way too.

“The framing was actually all joinery with glass in it and then what wasn’t glass just had hardboard inside it. So it wasn’t like a conventional timber frame construction and windows actually extended past what you could see inset into the walls and had just been boarded up.”

At the highest point in the living area the ceiling is suspended 3.5 metres above the original polished floors. The entire home has been rewired, painted, carpeted and finished in a sympathetic mid-century aesthetic.

The Hinuera stone on the exterior was restored, with the timber weatherboards replaced, and then the entire exterior painted in sun-drenched white.

The master bedroom got a makeover, with the bedroom next door turned into an en suite and walk-in wardrobe. The old office, when it was rebuilt, was converted into a bedroom to make up for the one lost to the master suite.

The entire living area and entrance were completely rebuilt ‘like for like’ with new timber framed double-glazed windows and doors opening out on to the deck.

The living area and former office were also extended onto the old deck area. This has resulted in a smaller deck, with a larger living area and making the office big enough to become a bedroom.

“It turned out to be a lot more than what we originally went in there to do.”

There are a couple of things that Horry particularly loves about the build.

“I really love the screen wall between the kitchen and the dining room. The timber was originally the rafters from the old roof. They were pretty banana-ish so we took them to a joiner and he machined them all back straight.”

Horry fixed them to the floor and ceiling so that they sort of ‘float’ … there’s no bottom plate or top plate. To keep Horry on his toes, the ceiling is on a rake so each of the old rafters step down in equidistant increments — each piece had to be cut to exactly the right length. And there were no spares if they got it wrong.

Just to complicate the job further, the floor wasn’t completely level either.

“If we messed one up we were buggered,” says Horry. So he invented a sliding template to calculate the exact measurement of each individual piece of timber.

The other part he was really satisfied with was the stairwell.

The stairwell linings imbue a modernist influence by using geometric angles, to take the same look of the living area down to the ground floor.

The existing handrail was retained and wooden panels for the walls were cut to echo the diamond shapes of the wrought iron hand rails. Each panel was hand-cut on site with a negative detail line completely parallel on each edge. He spent two days straightening the walls to take the ply and between each sheet of ply a champagne colour is revealed. Horry got a T-section piece of aluminium and cut a chase in the timber wall then stuck on the champagne aluminium, then the ply over that.

When it came to the interiors, the home owner Matt Cochran consulted with Mike Mansvelt — they are both passionate about the timeless nature of mid-century modern design.

Mike Mansvelt was familiar with the house and had been there many times as it had belonged to former wife Alisha’s grandparents.

“I actually went to look at it myself when it was on the market,” says Mike. “I love that house, the sun, the views and obviously the architecture.”

He worked with Matt and Horry to help decide where money was best spent and what was the most sympathetic way to capture the spirit of the house.

Mike’s mind is full of the many mid-century home images he has looked at over the years. When he travelled to the US a few years ago, he did a tour of mid-century homes in Palm Springs.

“Once your mind is catalogued with all those images, the formula becomes second nature.”

Mike, Matt and Horry combined to try and make it feel like the finished result had been there the whole time.

Matt had collected a lot of 1960’s memorabilia, artwork and furniture to use in his home before the work was even done.

“Everything that’s in there just seems to suit it,” says Horry.

Horry estimates about 90 percent of his company’s work is renovations and they all tend to expand from the original brief.

“People tend to ask, ‘While you’re here, can you do this?’, or you discover things about the building that need to be addressed, which can make things difficult when it comes to scheduling in other work as it all has a knock-on effect.”

But it’s the challenge and constant thinking that Horry enjoys.

“Not many people do it,” says Horry. “It’s a different skill to building a house — it takes more forward thinking and problem solving. I enjoy having to be on point all day.”

For that reason, Horry also enjoys new architectural builds. His perfect world would be to do one of these every year and spend the rest of the time doing renovations.

“Over the last ten years it seems renovating your house has become quite a popular thing to do. People are into maintaining the character of a home and the nostalgia of it and the stories that come with it.

“Also it’s getting too expensive to build a new home now. To find a decent section in town and then build a new house on it, is getting out of reach for people.”

Then there’s the environmental aspect — renovating is the ultimate form of up-cycling.

“A lot of people are now realising they like where they live, but just not quite happy with how the house is, so they renovate.”

Word of mouth has kept Hubbard Building busy since Horry started the business. At one stage they ended up on one street in Fitzroy for nearly three years, doing a total of 5 houses in the street!

“It made it easier to move all our gear,” Horry laughs.

Though he enjoyed the whole House of the Year experience, he’s realistic about the prospect of entering again.

“I don’t know how long it’s going to be before we come across another property that’s worthy of entering into the Master Builders competition, but now that I’ve been through it, it’s probably something I’d do again.”

The glass tiles in the kitchen are a classic Mid-century touch.

“They create movement,” says Mike Mansvelt, “so you have this palette of ever-changing light and colour. They add a little bit of jewellery to the room.”