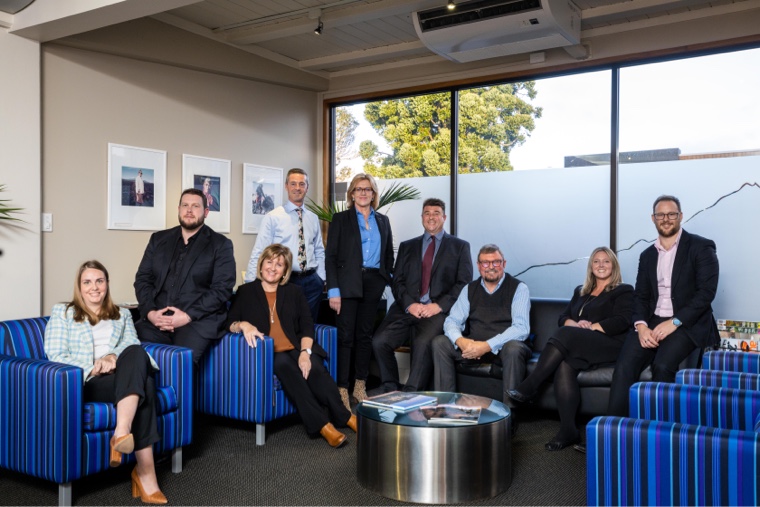 Taranaki’s newest law firm began with a close connection – a conversation between a husband and wife.

It all began with RMY Legal senior partner Charles Wilkinson, who believed a merger with another reputable law firm would be a solution to succession and improve the practice.

“We had not had any female senior partners and we also had a wee gap of partners in the 50-year age range,” Charles says.

So, in 2019, he made his move. “I asked my wife, who was a director of Billings, would they be interested in considering a merger.”

Linda Wilkinson put the question to fellow directors at Billings, a law firm with foundations going back to 1912.

“Quite quickly I got a smoke signal back – ‘yes, let’s talk’,” says Charles, who officially started at RMY in 1983.

“It was clear that we had similar approaches to the practice of law – we had similar clientele, similar types of law that we practice, with some variations. We had a similar strong commitment to the community in which we live.”

They decided to move to due diligence, which is legal speak for looking at all aspects of each other’s business – the partners, client base, finances, skill sets, staff management, to make sure they would be a good fit.

“Then we had the most extraordinary event any of us have seen in our practising years – we struck Covid.”

Before making a final decision, the parties waited to see the impact of the March-to-May Covid-19 lockdown on the Taranaki economy, which turned out to be surprisingly positive. “I was expecting a depression and we got a boom,” Charles says.

The decision to merge was made in September 2020 and so began an extremely busy period.

Preparing the RMY office to house all 55 staff (35 from RMY and 20 from Billings), rebranding, and working out the logistics of staff roles were all priorities.

“Right from the get-go we said no staff jobs were at risk. This was never about redundancy and reducing our workforce,” he says. “Our workforce is extremely skilled, and every member is valued and important to practising law into the future.”

TGM owner Andrea Leadbetter led the rebranding consultations, looking at the name, logo, collateral and website, which is still in development.

The theme that arose, strongly, was one of connection, beginning with the merger between the two respected law firms.

Also of importance were the their continuing connections with clients and the community.

“We felt we wanted a more modern way of doing business into the future and to depart from naming partners, which would have been nine strong,” Charles says.

So, Connect Legal Taranaki was born.

Next came a consolidation of offices.

RMY’s offices at 136 Powderham St were purpose built in 1983 to accommodate the then staff of 55, so it had enough space for everyone in the new merger.

It was, therefore, decided Billings would leave their Young St building, built in 1986.

To prepare the RMY premises ready to house Connect Legal Taranaki by April 6 was a huge undertaking, especially because staff were working in the building the whole time.

“Several people said, ‘you won’t be able to do it by that date,” Charles says. “My catchphrase was ‘you watch me’.”

He connected with the building’s landlords, Ekdahl Properties Ltd, and asked if it could be done on time.

“Steve Ekdahl just looked at me, grimaced, and said ‘yes’, and that’s what happened,” he says.

“The RMY people remained in the building and the builders just swarmed all over it. I have huge pride in our team for coping.”

Humour was their saving grace. They likened the noisy (think pneumatic drills), messy construction process to a World War II event, wore hard hats, called each other by military names and even produced a weekly newsletter called The Bunker.

“We are thrilled with the outcome – it’s got a modern, fresh workspace for everybody.”

There are now seven sound-proofed meeting rooms, instead of five. “We were able to do it without compromising the size of our reception area, which we think is really nice and fitting for a large modern law firm.”

Alongside the construction, they also upgraded all the wiring for the fastest-possible digital speed, renewed all software and hardware technology, improved the library digital media and will soon renovate the kitchen and staff area to finish the building off.

“We filled it up completely, with our colleagues from Billings joining us, so there’s a real hum to the place – it’s got a lot of energy,” Charles says.

The fresh space is packed with people, bustling, smiling, focused and friendly. Many are working, by choice, at stand-up desks.

“It’s like everybody has been able to refresh, which is neat. There’s a big synergy between the staff of both firms,” he says.

“Mergers take their time, but I can see people letting go of the past and looking forward to the future – and that’s just in the first month, which I think is fantastic.”

Charles says the experience for Connect Legal Taranaki’s clients has also been brilliant.

“It’s all about relationships with our clients and will be in the future. We are with them in the good times, bad times, we know their secrets and hold them dear and never divulge them. We attend their weddings and funerals – we are family to them, as they are to us.”

For Charles and the entire team at the merged law firm, connections with the clients and the community are everything.

“This merger has cemented those relationships for many years to come. It’s extremely important to have a succession plan and now both firms have that in their newly merged firm,” he says.

“The young people will be able to serve the next generations as they come through with the benefit of the expertise that both firms have built up over the years, with nearly 100 years each.”

The new combined team of directors are:

Charles Wilkinson started at RMY in 1983. During those 38 years he has practiced a wide variety of law, now with focus on the commercial and trust areas. He has also been a litigator for many years.

Tim Coleman practised law for about 28 years at Billings, specialising in the areas of commercial, trusts and estates.

Bridget Burke, a former Billings director, has had a long career with both firms, practising at a senior level in family law.

Linda Wilkinson, also a former Billings director, has practised in both firms for many years. She specialises in trusts, estates and conveyancing.

Scott Grieve, from RMY, has a substantial resource management practice and also works in the commercial law field.

Scott Chamberlain has worked for RMY and Billings. He practises in corporate and commercial law.

Adam Thame, from RMY, practises in the areas of conveyancing, trusts and business.

Stephanie George, from RMY, specialises in farming, conveyancing and trusts.