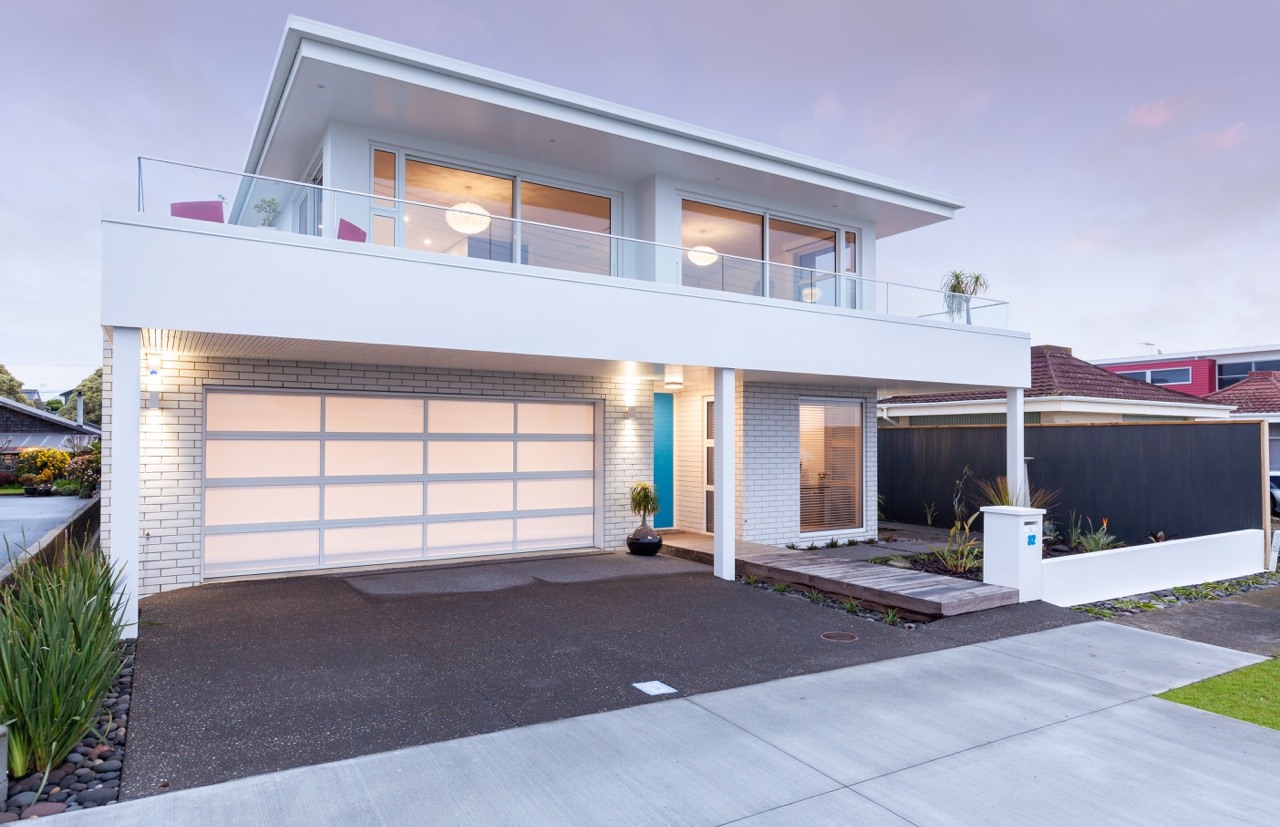 While many new home builds had to be suspended over lockdown, John and Vicki Haylock made it into their new home in Strandon just before Level 4.

The four bedroom home overlooks the sea and the couple were able to enjoy daily walks along the beach with their two young adult daughters, who were home for Levels 4 and 3.

John and Vicki describe the design as being inspired by Palm Springs Mid-Century Modern.
“We like classical design, we’re not so keen on the ultra-modern,” says Vicki.

The Californian community is renowned for its white houses and brightly coloured front doors and the Haylocks continue the tradition with a beautifully toned sea blue front door.

The house was designed by Milca Severo from BOON, where Vicki used to work, and has been cleverly sectioned into a front public wing and a back, private wing.

“Our early plan for the house was a rectangle, with the garage at the back, much the same as the original house,” explains Vicki,
“and I just couldn’t get excited about it. Then Milca came up with this idea which is really clever.”

“We asked around and we wanted a builder who was going to be on-site doing the building work. Sam ran our project and he was just fantastic,” says Vicki. “His attention to detail, how he thought everything through. If he thought there was a better way of doing things, we talked about it. It made all the difference … now the job is finished we’re not walking around thinking ‘Bugger, I wish we’d done this!’ It was great to be able to finalise the details during the build process. Sam kept on top of the sub-contractors and if something wasn’t quite good enough, he got them back to sort it. They’re really good builders and nice guys … we couldn’t fault them.”

The build took 10 months, with a deadline of 16 March so they could host a 21st birthday party for their eldest daughter in the new house on the 28th of March. Of course, at the time the build was planned and started, no-one knew New Zealand would be going into lockdown at midnight on the 25th of March. The Haylocks moved in on Friday the 20th March, with their youngest daughter arriving home from university on the 22nd. Alert Level 4 was announced at 1pm the following day, Monday the 23rd March, just after the movers delivered the last of their furniture.

John and Vicki rapidly made a list, so on Tuesday and Wednesday they deployed round town, buying up fence paint and a range of sub-tropical plants all while still trying to set up a home office and continue with their jobs.

“I had to visit three shops to get the paint,” recalls Vicki, “as they’d sold out of the base colour because everyone decided to paint their fences over lockdown.”

The couple are delighted with their new home but it took them years to find the right place.

When the Hamblyn Street property came up for sale, John could immediately see the potential for the site, and Vicki admits they didn’t muck around at the auction. They secured the site then looked into renovating the existing home, or partially demolishing it and rebuilding.

But in the end, the logical step was to demolish completely and start with a clean slate.

“It was sad bull-dozing somebody else’s house … I found that really hard to do, so it was nice to at least save some bulbs and plants from the garden,” says Vicki.

Lots of sunlight was a key part of the brief.

The eaves are bigger than normal — a nod to the design of Frank Lloyd Wright, an architect whose work the couple admire. The larger eaves also prevent over-heating during the summer, while in Autumn, Winter and Spring, the sun drops lower in the sky and provides natural solar gain.

The cladding is white brick and plaster to reflect that Palm Springs look.

Vicki remembers Belinda Brown of Belhams Interiors helping them choose just the right shade of white for the paint. The Haylocks knew they had chosen the right interior designer when Belinda turned up at their house carrying exactly the same image of a white house with a turquoise blue door, that they had been looking at.

“Belinda took our ideas and made them work cohesively.”

The rectangular shapes of the brickwork are echoed in the look of the garage door, which is made of polycarbonate and aluminium. From the outside you can’t see in and the garage door just looks white. But the material of the door allows light into the garage, making it a well-lit and welcoming space.

“It looks cool at night from the outside — when the lights are on the door just glows,” says John.

A raised timber decking path leads directly to the front door, which when opened reveals a long hallway. A door on the left gives direct access to the light-filled double garage while on the right is a spacious office with a tantalising view of the sea across the road. Both Vicki and John worked from home during lockdown, so the new office space has already been well-utilised.

A carpeted staircase leads from the right of the hall to upstairs where the living area and kitchen are, or you can continue down the hallway past the courtyard garden on one side with laundry, lift and main bathroom on the other side, to the two bedrooms located at the rear of the house.

Both rooms enjoy a view of the flat section, beautifully planted, with several established trees, bushes and bulbs retained. One of the rooms also gets to enjoy the courtyard garden that separates the two ‘wings’ of the house and a glimpse of the sea beyond. It also has its own kitchenette (cleverly concealed behind a double bi-fold door) so the room can be utilised as a guest room or even a second living area if needed.

The staircase near the front door features a picture window on
the landing that perfectly frames a view of the mountain.

“That was the really good thing about working with Petersen and Barnes,” says Vicki. “We knew we had a mountain view from the stairs and tried to imagine how to make the most of it using ladders and the plans, but it was just too hard. So we did a big walk through of the framed structure with the joinery installer before they ordered the joinery  — and we were able to tweak quite a few windows to frame the views from each room.

“That was a really helpful process, being able to fine-tune the house as it was being built.”

The stairs lead to a hallway on the second floor. This connects the bedrooms at the back of the house, and the living area at the front, overlooking the sea.

The living area incorporates open plan living and dining spaces along with a kitchen, which has more of a traditional kitchen layout.

“We had this layout in our last house and it works really well,” says Vicki.

The tiles used in the backsplash almost sparkle in the morning light, while the copper look to the joinery adds lustre.

Timber-look vinyl planks have been used for the kitchen flooring for their warmth, with carpet throughout the other upstairs areas.

A wooden deck runs in a U shape from partially along the western side (where a wooden staircase descends to the courtyard garden), around the front of the house, then extending further along the eastern side.

When westerlies blow the Haylocks can still have a barbecue round on the eastern side, and gain expansive sea views through
the sliding doors.

To make the most of the views, but also allow privacy, the glass balustrade is partially covered at the bottom by the exterior cladding of the house.

Heating is via a commercial grade heat pump in the living area, a heat pump in one upstairs bedroom, and another in the office. Under carpet heating features in the other bedrooms and under tile heating in the bathrooms.

The upstairs hallway takes in a terrific view across to Paritutu and Port Taranaki.

Opposite the window is a guest toilet, the lift, then the upstairs bathroom, which also serves as an ensuite to one of the two bedrooms upstairs.

The other upstairs bedroom has a magnificent sea view, a mountain view and overlooks the central garden courtyard.

They had been in the house for three months at the time of the interview and couldn’t think of a better place to spend lockdown.

“We love being here,” says Vicki. “We feel so grateful and privileged to live in such a beautiful location.”

As for their daughter’s 21st birthday celebrations?

The family of four shared a bottle of champagne in the new house on the actual day.

“The quietest 21st in the history of the world,” Vicki laughs.

The party finally happened during July in a combined family get-together to also celebrate a 50th, a 60th and a 70th birthday and a 40th wedding anniversary — milestones that all happened since Covid-19 hit.