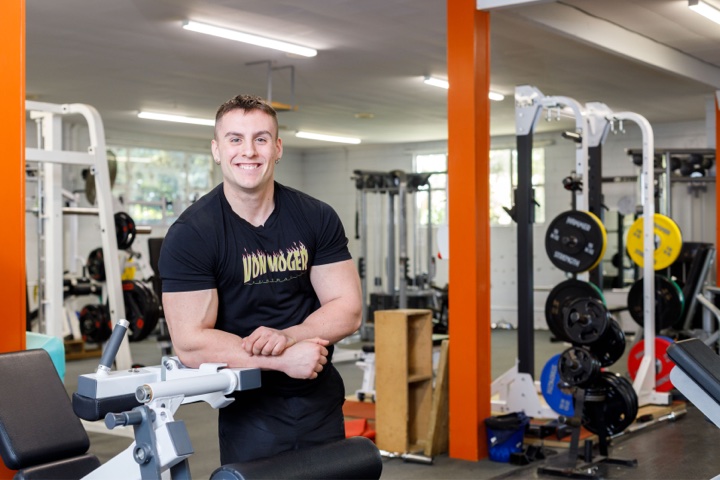 It’s the stuff of nightmares.

Imagine stripping down to the briefest of underwear in front of a crowd in the school hall where you spent your teenage years being bullied.

But Jake Stewart turned that nightmare scenario into the realisation of a dream … it was the scene of his first body-building win.

Three years later, Jake Stewart (20) has won countless national body-building titles, culminating in winning the Mr Teen New Zealand title in December 2021 when he was 19. He also won the ‘Natural Teenager’ title and ‘Novice Men’ division at that event.

Jake started going to the gym when he was 15.

“I was very chubby and very short at the time,” he recalls. “Not a good combination.”

His mother Ann and older brother Jessie were keen gym-goers and encouraged him to come along.

“Mum got me a membership and urged me to try it out. My brother showed me how to do basic movements like a bench press and a couple of things.”

He started off doing cardio before progressing to weights.

Prior to that first visit Jake wasn’t doing any physical activity. Like many teenage boys, he enjoyed gaming.

“Gaming is really addicting when you’re younger … it helps you get away from stuff.

“The gym was even better than that for me.”

“Lifting was something that just fell into place for me. You don’t focus on anything else … it’s just you and the gym. It’s something you can control.

“And there’s so many things in life you can’t control.”

Especially as a teenager.

Both Jake’s parents were body builders back in the day and it was his mum who suggested trying out for that first body-building competition.

“She said ‘If you don’t enjoy it, you don’t ever have to do another one again. I figured I might as well … have a goal and give it a crack … and I absolutely loved it.”

Body building has made Jake a lot more confident.

“You feel better about yourself and I’m a lot more health-focused.”

He feels like he has learned the tools to have a successful life.

“You can use the gym in so many different ways … mentally, battling through a rough time in your life … you can go there and work out and once you come out you can see all the directions you can go from that situation and see the positives. That’s what the gym does for me.”

At work, they call him ‘Muscles’.

He gets up at 5:30 each day to prepare himself a good breakfast and pack a healthy lunch … usually four chicken breasts with kumara, broccoli or beans and other vegetables.

He trains 5 days a week, often straight after work, for about one and a half hours per session.

“They used to be extremely long, like about three hours, but you don’t get the most out of training, going for that long. So I made my sessions shorter, but more intense.”

He watches training videos on the internet for inspiration and exercises to try.

“I generally train to failure …. so when the muscle simply can’t do any more.”

Do guys from school recognise Jake these days?

“It’s a weird one … I don’t think so. I’ve seen a couple of my old teachers, and they might recognise me but for the most part, unless you’re in the small group of friends I have, people probably won’t remember me from school … I look a lot different compared to then. Fair enough too … I wouldn’t recognise myself either.”

He looks back upon those days at school as a necessary thing to happen to grow up into the person he is now.

“I was bullied, but not super severely. Stuff thrown at me — a pine cone once, weird stuff, name calling, the way I looked …

“I remember from a very early age, even primary school, I was getting a bit bullied there too.”

But rather than let it overwhelm him, Jake found a path where he could rise above it.

“It’s a part of growing up. You can make a sob story out of being bullied and live that way your whole life like that and stay in that hole, or grow up and become a better person.”

From his experiences he has a deep understanding of what leads someone to get into a cycle where they put on weight and get depressed.

“I understand it, but I feel it’s absolutely necessary for people to get out of that loop and come out of it as a better person.”

All Jake needed was encouragement from his family to come to the gym.

He urges others who find themselves in an unhealthy place to go to the gym with someone they love and trust, even if it’s just for 30 minutes.

“When you work up a sweat and you really get it going, and feel like you know what you’re doing, you really feel better about yourself. Once you get that small nudge, you can turn it into a big transformation.”