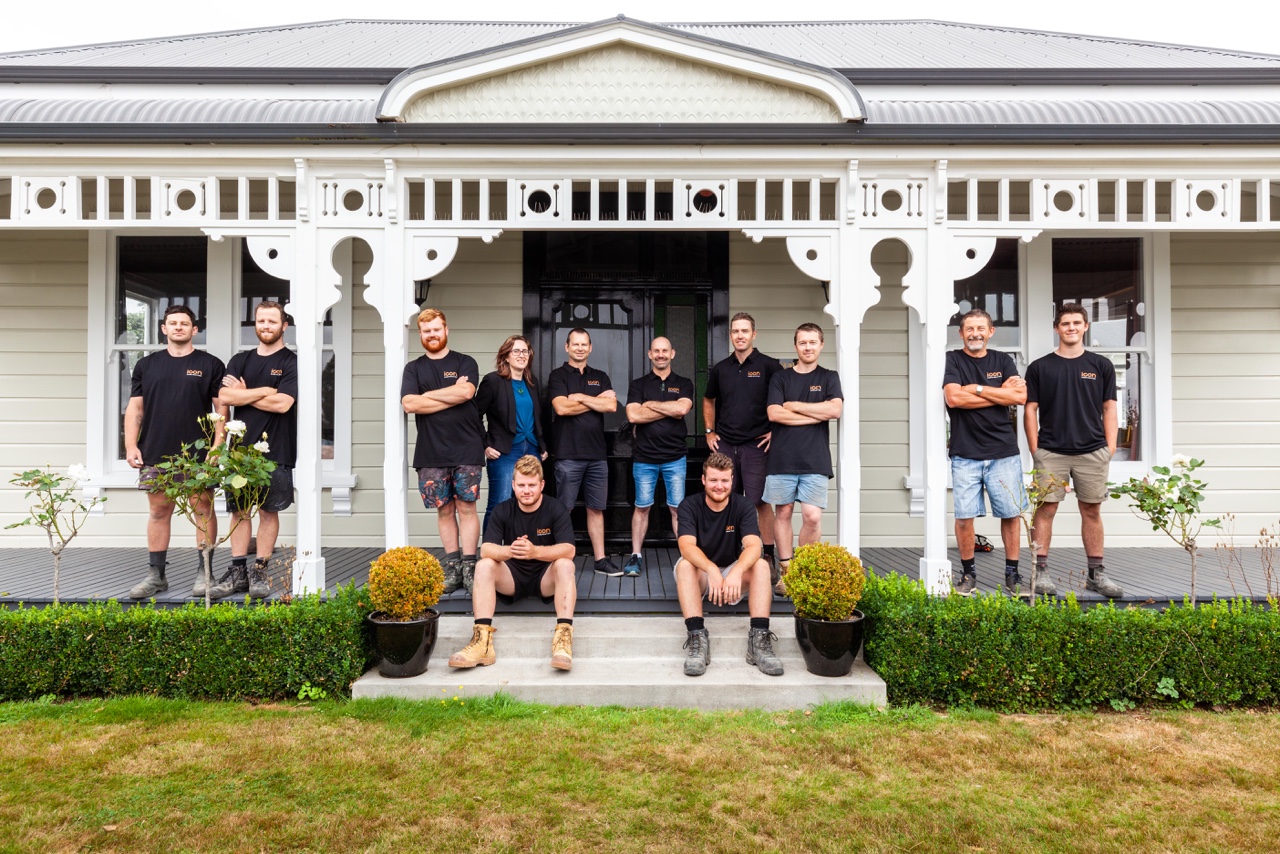 A reputable New Plymouth building company has rung the bell on the name that has served them well over the past 12 years, replacing it with a new brand that best reflects their people, processes and plans for the future.

Icon Construction has been operating as Bell Building, under the guidance of brothers Andrew and Steve Bell, since its humble beginnings in 2008.

Back then, and fresh off a plane from Perth, Andrew says he and his brother basically started trading on the eve of the global financial crisis. Their initial set-up ran from the computer cupboard of Steve’s master bedroom, and while both brothers agree the early days were a hard slog, their determination, values, processes and ability to provide unique, quality workmanship has seen their family business make dramatic moves since then.

“That’s actually a true story,” laughs Andrew. “I’d go into the bedroom, open up the computer cupboard and start working away while Steve’s wife was still asleep.”

While well-established builders around town were struggling to make ends meet at the time, the Bells were hunting for work, clients and building new systems from scratch in the drastic economic climate.

Steve says having not been part of the building boom allowed them to set up exceptional processes and make a name for themselves in a niche that still serves them well to this day.

“We chased the renovation side initially as a lot of builders didn’t care about that. I enjoy that type of work as opposed to slapping up frames and putting kit-set houses together, so starting there gave us a great base to move forward from.”

With a repertoire that now focuses on bespoke, architecturally designed new-builds, renovations, and the restoration of period villas and heritage homes, Andrew and Steve felt the time was right to develop a new brand name.

“It’s a bit of a new beginning for us, but at the same time, it’s business as usual,” says Steve.

“We’re already doing what we want to be doing in terms of the service we provide, it’s just bringing the brand up to scratch with that service.”

Andrew says the name Icon Construction epitomises everything they have worked hard to achieve as a company, from their values and processes, to the iconic projects they work on.

“We were brought up with old school values of honesty, integrity, hard work and a good firm handshake – values that are still core to our business and its success.

“We felt those values were also represented by iconic people like Sir Edmund Hillary, Richie McCaw and Sir Peter Blake, and while we don’t fancy ourselves as All Blacks or all-conquering mountain climbers (apart from our project manager John, who amongst other things has climbed to base camp on Mt Everest, by himself) we do think these iconic New Zealanders capture those values we hold strong to.”

Stepping away from the family name is also a chance to look ahead to the future, says Steve, and open up avenues for individuals outside the family to become a more integral part of the company.

Prior to the rebrand, the pair looked into franchisee options, but during their due diligence and through feedback from major suppliers, discovered their systems and buying power were as good, if not better, than any options they investigated.

The team operates a unique project management system and use the latest technology to communicate with clients and subcontractors daily to ensure all parties remain on the same page.

The new brand incorporates an infinity symbol which reflects these systems and also backs up their desire to create friendly, easy-going and lasting relationships with their clients.

“Once you form a connection with us, we like to work closely with you every step of the way. Our aim is to keep clients in the loop – if they want to be – as we feel this is crucial in ensuring we reach that iconic build or renovation they’re after,” says Andrew.

The Icon team also gives fixed quotes for renovations, which is becoming more and more important for homeowners to secure bank loans.

Steve says through the initial pricing and design phase, they take the care and attention to think outside the box and investigate all avenues in order to determine smarter ways of building, while also providing accurate pricing to clients.

“Sometimes doing that does bite us on the bum, because we may end up losing a project due to pricing something a bit more in-depth to ensure there’s no surprises for the client. But Andrew and I would rather sleep at night knowing we’ve done our best for them. We’d hate to get to a snag in the project that wasn’t highlighted early on, in terms of cost, which is just difficult for everyone concerned.

“It’s not always possible to capture everything, but we certainly endeavour to do that from the get-go.”

The Mangorei Road based company’s work ethic and quality is backed up by the range of awards they have picked up over the years. Having won the New Business category at the 2010 Taranaki Chamber of Commerce Business Awards, the team went on to win silver awards for renovations and new builds they had worked on, at the 2012 and 2013 Master Builders House of the Year Awards.

It was only up from there, after they took out the Gold Award and Local Category Winner with a $500,000 period villa renovation they completed in 2015, which then went on to become the Local Supreme Renovation of the Year winner, and a Gold Reserve National Finalist.

Doubling the size of a period villa to make it appear as though it was always that way is a tricky task, yet villa owner, Matthew Manderson, says from the foreman down to the apprentice, the Bell team showed a real focus towards detail and quality when completing his unique project.

“I specifically recall them spending a lot of time getting the fiddly fretwork perfect to match the existing. The join in the house can’t be determined at all.”

Manderson says his home is a beautiful mix of old and new, made up of existing and recycled features, coupled with new building techniques that weren’t available 130 years ago.

“I love how we have a house that will stand for another 130 years and is “grand”, in keeping with the original villa that was designed by the Catholic church all those years ago.

“Throughout the renovation, they also brought to our attention little gems like writing on the walls, found artefacts like a coin placed in the chimney mortar, dated 1890, photos behind the fire places, and a stamp behind the wallpaper showing the date. We kept all of these and they add something special to the history of the place.”

More recently, in 2016, Bell Building won a Gold Award and Local Category Winner in the

$1 million – $2 million New Build category with a home they built on a challenging Heta Rd section.

Homeowner, Belinda Brown, says it was the skills of the Bell crew that really impressed.

“There were a few features we wanted in our house and they had to be really creative to make them work functionally. We have not had any structural issues or repairs in the four years since the house was finished and we couldn’t love it any more than we do.”

The Browns were living overseas during the build and say that wasn’t a problem given the strong communication and systems Bell Building had in place.

“The whole team work as a tight unit. That’s what makes them successful,” says Belinda.

“From the office, to the builders on-site, everyone is pleasant, helpful and supportive of getting your project completed on time, on budget and to the highest standard. During the building phase it wasn’t really our house, it was theirs. They treated the build as if it was their own and only handed it over when they felt they were happy to live in it themselves.”

It’s clear to see the team at Icon have a passion for building one-of-a-kind, or as some would say, “iconic” homes, when talking to them about their work.

Steve says his greatest enjoyment comes from being able to personalise each build as much as possible.

“We’re talking about people’s homes, their dreams, it’s where they live and the space they spend the most time in. Everyone lives differently, sees things differently and utilise their spaces differently. I really enjoy being able to talk to them about that and bring it through, rather than provide something off the shelf that doesn’t have that emotional connection to them, or particularly suit how they live.”

Having recently completed the restoration and extension of a grand Class A heritage home in New Plymouth, the team are pursuing more of the same in 2020, along with one-off projects ranging from unique renovations to architectural new builds.

In the meantime, they are looking forward to kicking off the year under a new name, and embracing all that comes with it.

“It’s an exciting time for us, and it’s the right time. While we’re leaving behind our family name, Icon as a brand captures everything Bell Building means to us, and we’re excited about where this may lead to in the future,” says Andrew.