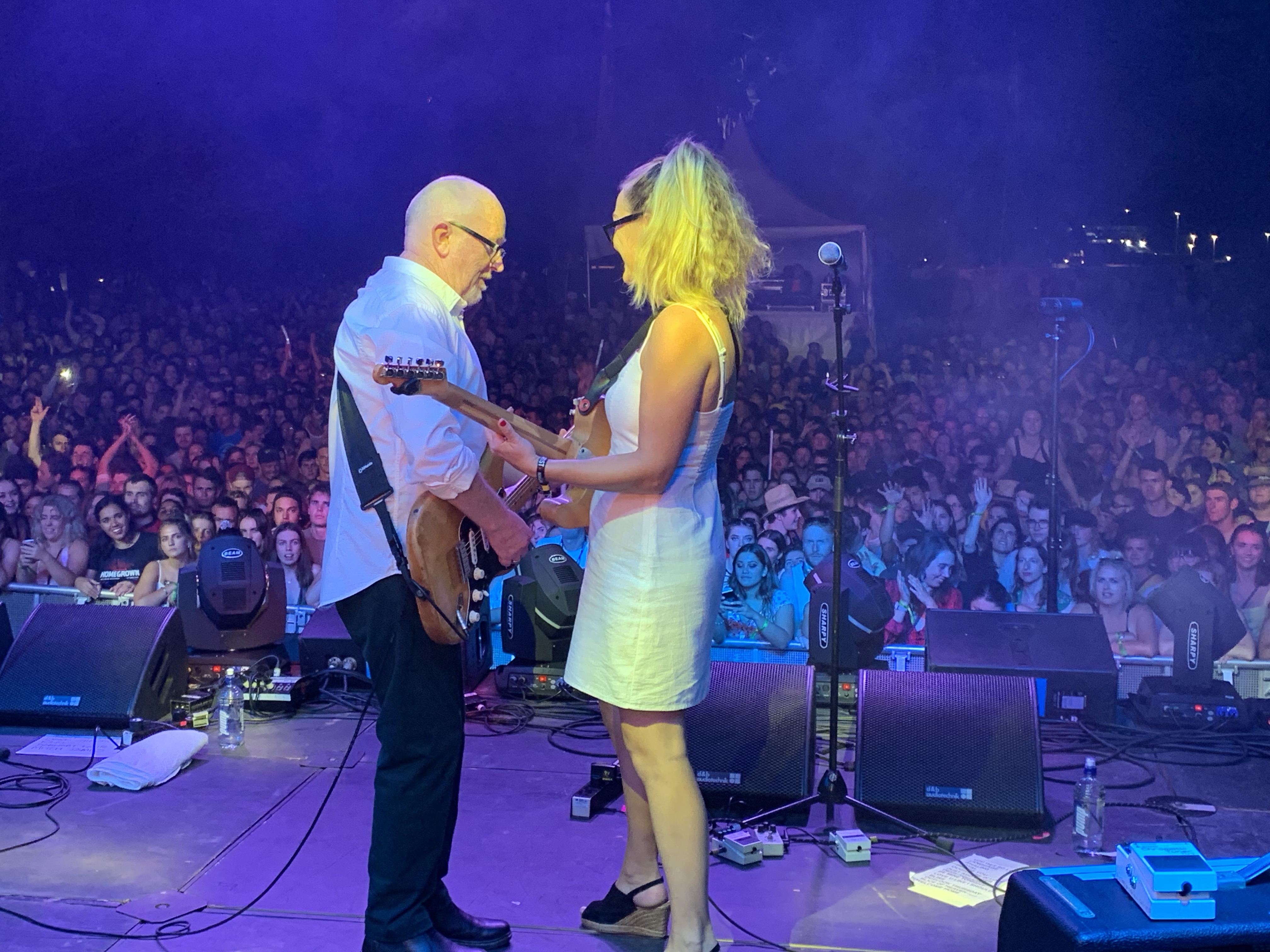 Standing on stage with 100 Taranaki students for the opening of WOMAD on March 15 was a moment of heartache and hope for Victoria Girling-Butcher.

Leading up to the World of Music Arts and Dance festival, she and fellow musician Charlotte Johansen had run Make Every Word Count song-writing workshops with students aged from about 9 to 17.

The youngsters had been expecting to sing their song about the joy of living in Taranaki and their hopes for the future to Prime Minister Jacinda Ardern.

But instead of opening a festival that embraces cultures from around the globe, the PM had been called away to deal with the aftermath of the Christchurch Muslim massacre.

When the young people stood on the TSB Bowl of Brooklands singing about the freedom of their lives, the simple pleasures of being with whanau, eating fish and chips, playing and swimming, of Aotearoa peace and more, their words had added poignancy:

“We make a difference with our own words

Life isn’t perfect but we give it worth

You make the meaning in your own life

We are all different but the same in unity…”

“They summed it up beautifully – it was overwhelmingly emotional, to be honest.”

Working with the students has given Victoria huge confidence at “how capable the young people of Taranaki are and how willing they are to try something new”.

The next night, she was on stage in Nelson as rhythm guitarist and backing singer for Dave Dobbyn, who was opening for Canadian singer-songwriter Bryan Adams.

Overcome with the grief that 50 people had been killed in an act of terrorism by a lone gunman, Victoria says that gig was tough for Dobbyn and his band.

“He couldn’t finish Welcome Home. He was pretty choked up.”

On the Sunday night, they had been scheduled to play in Hagley Park, Christchurch, but that was cancelled.

A week later, at Homegrown in Wellington, Dobbyn and his band gave it everything. For Welcome Home, an anti-racist song written by Dobbyn in 2005 about accepting immigrants, he was joined on stage by a variety of New Zealand artists.

“It was fairly powerful,” Victoria says in understatement. “The crowd was singing so loud I couldn’t hear Dave’s guitar.”

Victoria herself is married to an immigrant.

While camping at Ahu Ahu Rd with her parents, Lance and Alison (known as Ali) Girling-Butcher, she met an exotic-looking man on a surfing trip.

“So, I invited him to come to our bonfire…”

After a long-distance relationship, Girling-Butcher and Gregori Matsunuma were married and lived in Paris for a couple of years. They returned to New Plymouth for the birth of Camille, who is now aged four.

The husband and wife sometimes struggle with miscommunication through language differences. “He grew up in two cultures – France and Japan – he’s most at home between the awkward precipice of two countries,” she says.

“Bilingual relationships will always have their moments, especially because I talk to myself so much.”

Along with words, music also flows from and through her.

“Just recently, I have had a problem with my back teeth because I’m constantly making rhythms and often going along with the rhythm of my teeth is a bass line.

The result is cracked teeth.

After talking with other musicians, Victoria thought she was alone with her music-making molars. But a Google search found a forum filled with others in the same teeth-tapping predicament.

Already, Victoria can see the music gene switched on in Camille, pronounced Cammy, the French way.

“She’s constantly making rhythm and singing songs and I’m noticing her pitch getting better, so I think it’s a really entrenched thing I have passed on to her,” Victoria says.

Known by many as Tause, this multi-talented woman is a singer-songwriter with four albums behind her – three with a band and one as a solo artist.

She is also a journalist, who writes for Live magazine. Her dad is the former editor at the Taranaki Herald and Taranaki Daily News, and her mum, is best known for her art, particularly painting scenery for a long list of shows.

Victoria has much in common with her father, brother Tim and sister, Moon Cameron – they all have dyslexia.

Over the years, she has learnt to work around the learning disability, which makes it far harder to learn to read, write or do number work.

Initially, she turned to music. “I used to have singing and piano lessons with Harry Brown; I was eight,” she says. “Because dyslexia had me so unhappy at school, singing was my thing. I knew I wasn’t stupid at school, but music was my escape.”

Another teacher was a Mrs Veale, who Victoria recalls vividly. “She would slap your fingers with a ruler if your hands weren’t high enough off the keyboard. She was about 85. She sucked a sweet and it dribbled down her jowls. She was totally terrifying. She did believe in me.”

Victoria wrote her first song at 11 years old. “It was called Multi-colour Love and that was it, I wanted to be a songwriter.”

After leaving school, she went to the Nelson School of Music, where she discovered that singing and playing the piano could be cumbersome. “I realised due to the piano’s lack of portability, a guitar was best.”

That led to a South Island hitchhiking adventure with Felicity Millar, guitars in hand, as a duo they called Ovum. “She and I had crazy fun times.”

After living in Dunedin, Wellington was the next stop to study English and Anthropology at her namesake university. In 1998, she moved to Auckland to study Ethnomusicology and formed Lucid 3, as lead singer and guitarist with Derek Metivier (drums) and Marcus Lawson (bass, backing vocals, keyboards).

The gap between the second and third albums probably came down to the fact Victoria spent 2005-2006 studying journalism at Witt in New Plymouth.

As singer-songwriter, Victoria tells stories, often using quirky lines because of the dyslexia, but she’s learnt to manage well with the help of computers.

She also felt journalism was a good fit with being a musician.

“I needed another outlet and I do love information and telling people’s stories. What are these people thinking, what’s it like being in their shoes? I’m truly curious about people.”

After graduating, she ended up working in TV research. This meant finding out about people’s lives, gathering information and leaving the presenters to interview them. She worked mostly in production houses and many of the documentaries were aired on Māori Television.

“I did a number of interviews with veterans from both world wars and Vietnam.”

This time of her life was a highlight for Victoria.

“I was able to work for Lucid 3, start writing my own material for a solo project, research for documentaries and I had just started working in Dave’s band as well. I had all the balls in the air juggling them. It was a fulfilling period,” she says.

“It was not something I could sustain because it was physically demanding.”

From this period, her 11-song solo album, Summit Drive, was produced in 2011.

“That was released when I wasn’t very well. I could not put as much energy into it.”

She lives with a hidden illness called Sjogren’s Syndrome, an auto immune disorder that attacks the endocrine glands. “I spend all day putting drops into my eyes and I have no saliva.”

Her worst attack was in 2008, when the inflammatory disease produced arthritic symptoms.

“I’m in good health now and I’m pleased about that.”

Apart from her back teeth. “Often, I start the lyrical process alongside the writing of the chords and then I let it flow out.”

But she has found motherhood and song-writing don’t fit well for her. “It’s a very creative process raising a child.”

When Camille asks questions like, “what is a cloud for?” or “what does a leaf eat?” Victoria feels a commitment to break down the answer for her daughter.

“It’s making me think about things differently and to come up with a language that she understands takes creativity. A whole part of my brain goes towards expanding her mind.”

While she would love to put that amount of creativity towards song-writing, she doesn’t feel in the right headspace, but it’s coming back.

“I feel it changing as she gets emotionally independent.”

There’s hope in her words, like when she stood on stage with a 100 Taranaki kids on the day New Zealand’s collective heart was broken by an act of horrific hate.