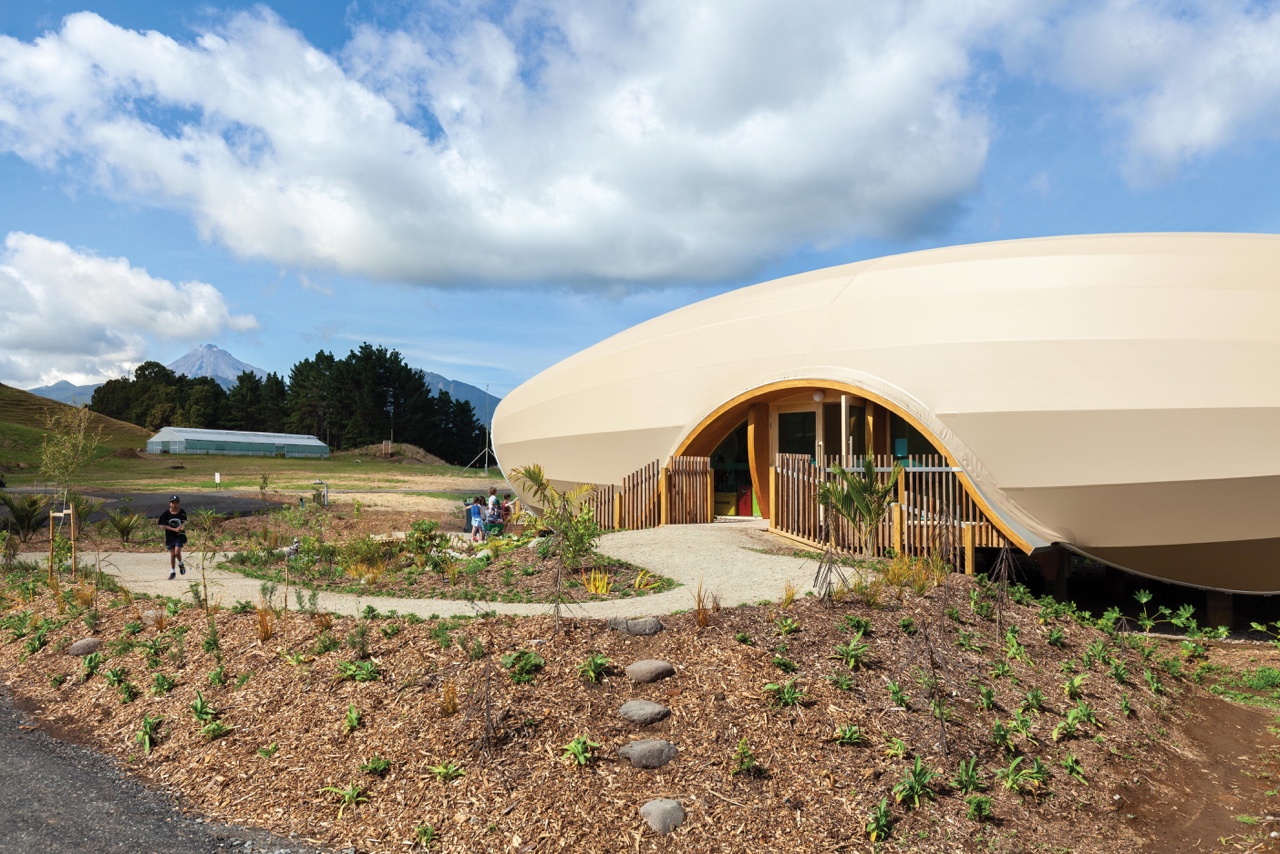 It’s a place for the brave, the bold and the timid. The doers, the makers, the dreamers and the old school academics. Green School New Zealand has attracted an inspiring variety of local, national and international students and families to its Ōākura pastures, who are set to be the pioneers of its 21st century way of learning.

The school celebrated its official opening last month with an occasion attended by more than 350 people including school faculty, local and national government, media, iwi members and many others from throughout New Zealand who have played a part in the school’s progression from dream to reality.

Just over 50 students will be the first to experience the holistic, natural learning environment the Green School team and its partners have worked hard to create over the past year, in what has been an astounding demonstration of vision, innovation and execution.

The teaching faculty has been hand-picked from more than 600 applicants, and will ensure a teacher to student ratio of approximately 1:5 for the first two terms of 2020, and no more than 1:10 thereafter.

The first teachers are a combination of local educators, and those who have come from international roles across South East Asia, Indonesia (Green School Bali) and throughout New Zealand.

One of those teachers is Taranaki’s Di Hoskin, who has played a huge role in the teaching and development of the Green School curriculum over the past 12 months.

“I still wake up each day grateful for being one of the founding kaiako (educators) for Green School NZ.  I remember visiting the site soon after the land was purchased and being blown away with the vision and ideas that were shared with Matua Mark (Armstrong) and myself.

“We have such a diverse group of ākonga (students) and it’s going to be exciting being able to support their strengths and interests with our small ratios.”

GSNZ CEO Chris Edwards is also excited by the first learners of Green School, fifty per cent of whom are coming from overseas, with the remaining fifty per cent a mixture of Taranaki children and those from around New Zealand. Their interests and skills range from the outdoors and animals, to literature, acting and science.

The interest in the school, he says, has been beyond imaginable, but the more he himself has learnt about Green School, the more he understands why.

“Our astonishing campus is of course unique, but the other major difference with Green School is a bespoke curriculum that looks at our learning from the perspectives of the 21st century.

“I must stress that I was very happy with my own seemingly conventional education back in England, but what got me here, will not get the next generation there.”

With a learning programme that upholds the necessary components of the New Zealand curriculum, he says the remainder of students’ learning will differ greatly from traditional education and be based on four key points; relationships, experiential learning, action-based education and developing a local to global mindset.

Everything a student learns will be based on their hopes, interests and prior experiences. As part of this, one day of every week learners will focus on a personal passion project. Guided by a teacher, the student will be able to explore something in-depth that really fires them up, and apply that to their learning programme by weaving in traditional subjects.

Assessment will be co-constructed, meaning student and teacher will come together at the start of the year to decide upon the levels that are appropriate for the student to strive towards. There will be no “one size fits all” testing to determine a student’s fate.

Oxford-educated Edwards has come to Green School from Singapore, where he was head of the United World College of South East Asia – the largest international school in the world with more than 5,000 students.

“The reason for moving from such a large school to Green School is simple – I see the possibility of transcendence here. The Green School way will allow us to redefine what happiness means, what success is, and what wellbeing looks like in the modern world. That applies to the individual, the community and on a global level.”

Edwards dismisses any stereotype implying Green School is simply there to produce “green leaders”, stating it is more about developing the values and dispositions of a student so they can apply them to whatever career they choose.

“They might decide to become a doctor, a homemaker, a musician, a whole host of things, but the behaviours they model through whatever they end up doing, will go on to influence those around them, in a positive way.”

The Wotta family is one of many who have left international shores to set up life in Taranaki. New Zealand-born Sarafina, and husband, Samuel, spent 12 years working in Singapore where they brought up their three children Harrison (12), Brooklyn (10) and Kyna (8).

Having lived in Fiji most recently, Sarafina says she jumped off the couch with excitement when she heard about Green School New Zealand.

“We have always been big fans of Green School Bali. Our boys have spent time there during holiday programmes and absolutely loved their experiences. Seeing how excited they were, how it sparked a light in their eyes, and witnessing their interest in the environment and the world around them was just truly special.”

Sarafina says she is most looking forward to her children being exposed to a new way of learning and experiencing that on such an amazing campus.

“It brings a whole new, refreshing, creative experience to learning. Being educated about sustainability, the environment, entrepreneurship, being a part of the GSNZ community and to also learn more about the Māori culture and local Taranaki environment is very attractive for us.”

Perhaps one aspect of Green School that has been turning the most heads worldwide is the construction of its buildings, due to the architectural components and technology used.

From the beginning, the build has challenged traditional practices through its desire to use local, sustainable products and unique shapes in order to inspire learners.

Set on a 150-acre former dairy farm on Koru Rd, the landscape, mountain view and sight and sounds of the Ōākura River have provided a picturesque canvas for the school. Over the past nine months, an aggressive construction and planting plan has seen that canvas transform into a site of innovation and intrigue.

GSNZ co-founder, Michael Perrett, says they have been extremely conscious to ensure structures and areas have been created on campus that will suit all walks of life.

Their inspiration, he says, comes from knowing children will be able to look up, look around, and realise that someone cared enough to build beauty and inspiration into the school campus.

Perrett says the ripple effect the project has had on the construction industry in particular, has been dramatic.

“Through this project, we’re influencing the procedures and policies of a 100-year plus construction company, whereby what they’re learning here with us together, is now being used at their other sites. That’s incredibly rewarding and humbling for us.”

That sentiment is backed up by Clelands Construction site foreman Heinrich Fourie, who says the project has influenced the way they are looking at everything from physical construction, to waste.

“We’ve got a waste bin on site that goes to the landfill. On a big construction site like this, it would typically be going out three to four times a month. We emptied that bin three times in six months.

“For us to know that we’ve been involved in a project that will have such an impact on the future, is not only changing us, but it’s changing the future and how we’re looking at sustainability, recycling and relationships, and how we can make a small change in a big world that needs it.”

In just four months, the team at Clelands built three 160-square-metre learning pods, made possible by the computer technology used to produce the plans and materials for the structures.

More than 28,000 native plants have been planted on-site, with a further 10,000 waiting in the nursery to be planted, while hundreds of fruit trees and orchards are dotted around the campus to create an interactive space for students and visitors to enjoy.

A multi-million dollar wetlands project, state-of-the-art fibre technology, a co-working space for parents and visitors to work or collaborate, a drainage swale that doesn’t rely on concrete or PVC, hydronic underfloor heating, and a carpark made from completely recycled materials have all contributed to the school’s recent 50-year qualification for long-term sustainability.

Campus water is gravity-fed, meaning pumps are unnecessary, while it has also implemented a natural Biolytix septic system that uses tiger worms to break down its sewage. The wastewater from the worms is then used to fertilise the campus’ native trees.

BOON managing director, Glenn Brebner, says right from the start his team had to look afresh at building practices in New Zealand thanks to the challenge laid down by Green School NZ.

“It’s been a fantastic process. Yes, enjoyable, and yes, challenging.

“It’s really made us take stock and look at what we’re doing. Typically you’ll see new buildings going up and what you don’t see behind the scenes is the huge amount of waste and inefficiency. Part of this process has been looking at that waste stream, not only through construction, but in the life of the building. That’s changing the way we look at what we’re doing back in the office and across our other projects.”

While majority of the products and services for the build have been sourced locally, Green School ventured offshore for some products unavailable in New Zealand. One of those is the protective skin (roof) of each waka which is made from a single ingredient polymer material. The Serge Ferrari product from France is completely recyclable, so can be sent back to the manufacturer and made into a new cover,
if and when necessary.

Perrett says in sourcing these revolutionary products for Green School, he hopes it will help to raise awareness about alternative products available, and help make them more accessible here.

With a school roll that is full for the first half of 2020, and just a few spots remaining for terms three and four, the development of Green School is certainly putting the spotlight on Taranaki.

Recent studies have shown its potential to not only have significant economic impact on the region through areas such as architectural tourism and increased employment opportunities, but socially through its attraction of highly skilled parents and caregivers who will be applying their skills here in Taranaki. Despite being a private school, it also plans to welcome schools and community members in, to experience life and learning on campus.

Edwards says the journey to get Green School up and running has been extremely challenging, but he knows the rewards will far outweigh any walls they have come up against so far.

“When you do something that is different from the norm, that challenges the status quo, there are always going to be barriers.
We are lucky that the passion and purpose of the global team working on this project has carried us through, and we are now in a place where we can go forward and implement this wonderful way of learning for the benefit of our children and the regenerative future of this community, region and planet.” ••