Getting Grippy With It 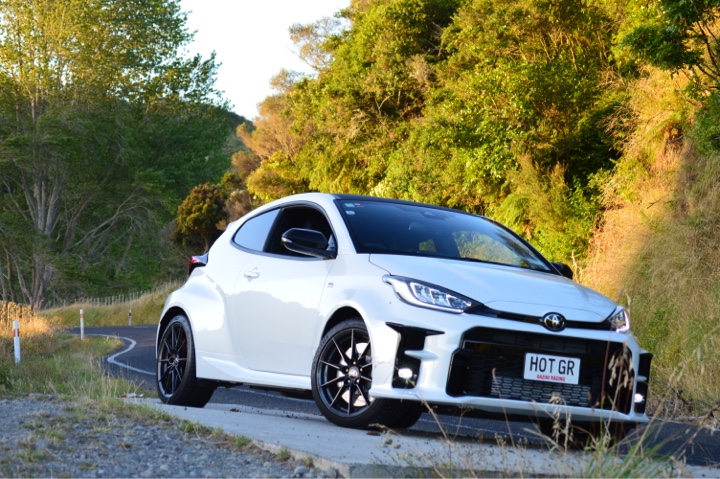 LIVE Drive writer, Richard Hobo gets to test out the latest incarnation of the unlikeliest proposition that buyers are waiting months to get hold of.

Maybe your gran had one, maybe your Mum has just bought one and chances are, if you’re into cars, you’ve probably never thought of a Yaris as a performance car. Well, all of that will change when you get yourself behind the wheel of the GR version.

Forget pretty much everything you know about small hatchbacks, as Toyota has performed a major redesign of this car. To give you some idea how much the GR Yaris differs from the standard Yaris, it takes ten times longer to build at the same plant that produced the Lexus LFA. It is only available as a three-door hatchback, in white, red or black and under the bonnet is the most powerful 3-cylinder engine ever made. It is a turbo-charged 1.6 litre producing around 260hp and 360 Nm of torque in a car that only weighs 1280 kilograms. The GR Yaris is only available as a 6-speed manual, 0-100 takes 5.2 seconds and fuel use is 8.9 litres per 100 kilometres.

So, what’s it like to drive? Well, if you’re not in a hurry, this car is quite happy to pootle along with no fuss or drama. The exhaust tone is muted, the three-cylinder thrum nothing more than a pleasant background burble. I even found that bumbling along at 90km/h in sixth gear, I was able to easily overtake without the need to change down. But, when you want to move things along a bit, the GR Yaris becomes a completely different beast. Change down a gear or two, stand on the accelerator pedal and hold on. The revs climb incredibly quickly around to the 7,000rpm limit — so quickly that I didn’t even notice any turbo lag.

Of course, power is nothing without control and the GR Yaris is shod with a set of super-sticky Michelin Sport Pilot tyres that grip the tarmac like gunmetal magnets. Teamed with Toyota’s GR-Four all-wheel drive system, there is absolutely tonnes of grip and it can be switched between Normal, Sport and Track modes to vary the power split between the front and rear axles. There’s also a good, old-fashioned manual handbrake.

Interior is standard Yaris turned up a bit with plenty of red stitching around the seats, gear lever boot and steering wheel. GR logos feature around the cabin, from the starter switch to the seat headrests to remind you that you’re not in grandma’s runabout (as if the blurred scenery rushing past the windows wasn’t enough).

The downsides? There is limited rearwards visibility (but you do get a reversing camera) and the rear seat is well, a bit tight, but if you fold it down you do get a flat floor (potentially giving you a very fast, very small delivery van).

However, any little niggles are far outweighed by the GR Yaris’ absolutely stonking performance and it would be a mistake to think of this car as just another hot hatch, as it is far more capable than that. This pocket rocket Toyota is more of a rally car for the road and quite frankly it is like nothing else I have ever driven.

Want one? Good news, Toyota New Zealand has just been allocated a further 100 units from the 25,000 global WRC homologation production run, available from mid-2022, but get in quick. The GR Yaris also won the AA Driven Car of the Year Award for 2021, so interest will be high.

Toyota New Zealand Chief Executive Officer, Neeraj Lala said, “I encourage any customer wanting one of the 100 additional GR Yaris units to register their interest at their nearest Toyota Store”. Tasman Toyota is the Taranaki dealer for the GR Yaris and all Toyota and Lexus models. “The global demand for this vehicle continues to be very high, so they will go fast,” Neeraj says.