From Waitara to the World’s Fashion Capitals 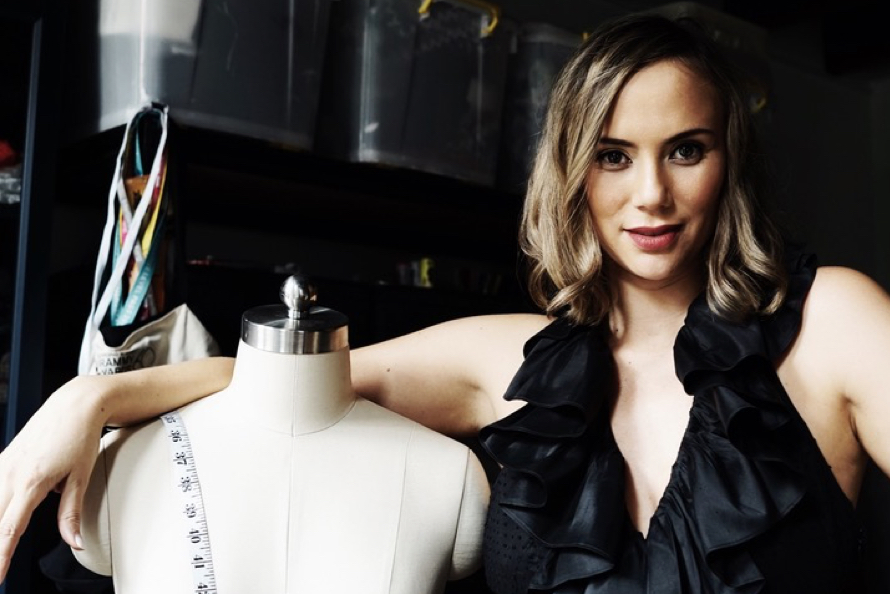 Her designs feature influences from her Maori heritage and Waitara upbringing with hints of harakeke weaving, taniko, possum fur and feathers. This year, Tessa Bailey-Lont (36) has taken her collections to the world stage with shows at Fashion Weeks in Paris, New York and Singapore.

It all started with Swanndri.

“My nan (Olwynne Bailey) worked in the Swanndri factory in Waitara,” Tessa recalls. “She had industrial machines at home and she would make us clothes whenever we wanted. So I guess I was designing my own things from quite a young age. I wasn’t very good at sewing … she would sit behind the machine and I would kind of describe to her what I would like. We’d go and choose fabrics together and things like that.”

Growing up in Waitara was full of whānau, the outdoors, playing on the street with neighbours or making dirt tracks with their bikes. And yes, jumping off the bridge into the river.

“There has always been a sense of safety in Waitara, the community looks after each other.”

“I did get pregnant young. I was 17. Suddenly I had to grow up and think about my future. I decided to keep pushing with school and moved to Wellington with my 6 month old to study industrial design at Massey College of Creative arts.”

She says the course taught her to conceptualise and then turn those concepts into three-dimensional stories. “Another thing is learning to work on your own projects. You have to learn how to source information, resources and techniques.”

While the other students did their projects on cars or furniture or light fittings, Tessa found her projects were often fashion-based.

“I was doing the contemporary Maori art course as well during the four years I was there. Weaving and taniko was very important to me.

“Once I finished uni it’s quite difficult, as a creative, to find a job.”

Especially with everyone else from the class graduating at the same time, so Tessa did what many young Kiwis do … she decided to go on her OE, taking her young daughter with her.

Before she left, Tessa’s grandmother brought her into the art gallery in Waitara for a month. “I did this whole story around Maui and the Sun with a whole bunch of fabrics,” she recalls. “I decided to develop some fabrics based on the story. I was going to turn them into furniture, but because I had so many friends in fashion, including some people who worked at Te Papa, who were like “you should do a show” and then other friends who were models who said “we’ll model for free”, and my grandmother actually made a lot of those garments, so it just fell into place that it became a fashion show. I did my first one at Owae Marae (in Waitara). Then I took the show to Te Papa, and that was right before I went to Lisbon.”

She got her first job using her new degree from a guy she met on the plane (from Lisbon to Barcelona). “He said I could work for them doing their products. He had a cosmetics company, so I started doing cosmetic bottles and packaging. I really enjoyed that.”

She was with the company for two years. Then the Global Financial Crisis hit and Tessa returned to New Zealand. She went back to school (at the NZ Academy of Fashion in Auckland) to learn how to sew and make patterns. In her spare time, she made clothes for her friends and slowly built up a client base.

At the 2014 WOMAD, Emere Wano put some of Tessa’s designs in a stall.

“The weather was really bad that year and the only things that really sold were my ponchos,” laughs Tessa, who moved back to Waitara and opened her own shop — The Studio.

“Rent in Waitara was really cheap and I wanted to be closer to whanau … it also had space for a studio where I could explore and play and develop some more patterns. I had a couple of people working for me and it was really good but Waitara’s not the best place to sell things like that.”

During this time, Tessa met future husband Michael Smith on a trip to Melbourne to watch a friend compete in a poker tournament there. Michael, who is Ngati Raukawa (South Waikato), was in the city on a work trip.

Love blossomed and Tessa was spending increasing amounts of time at his home in Singapore.

She closed her shop in Waitara, but continued to sell stock online from her website lontessa.com and put items in fashion shows in New Zealand and Australia.

Michael and Tessa married in March this year at Owae Marae. Immediately after the wedding, Tessa packed up her bridesmaid’s dresses to show at Paris Fashion Week three weeks later.

Oxford Fashion Studio presented 13 independent fashion designers from around the globe to discover the latest design talent, and Lontessa was one of the brands selected.

“They supplied the models and make-up so all I had to do was turn up with the garments.”

“The whole experience in Paris was amazing. They had it at the Intercontinental Hotel, which is across the road from the Paris Opera (Palais Garnier) and the space was amazing.”

There weren’t a lot of people at her show, but the ones that did turn up were “quality people”, says Tessa, who did some valuable networking, but confessing she felt a little out of her comfort zone. “There’s like a million (social media) posts that happen during the week and a lot of the networking actually happens in the weeks after the show.”

Her time in Paris gave her a lot of classical inspiration whereas during the first week of September, the vibe at New York Fashion Week was almost the polar opposite.

“The space wasn’t as nice in New York, it was more grungy, but both were inspiring in different ways. It was very new and modern with fresh ideas and free thinking.”

She called her New York collection ‘The Hunter is Now the Hunted’, which featured gloriously coloured and styled possum fur.

“It was all about the predators in New Zealand, who have been hunting our wildlife and birds … they don’t belong in New Zealand. It’s an eco-response to still being able to wear fur because fake fur goes through a lot of chemical processes.”

There were no issues with the furs.

“I think New York’s a place where anything goes.”

For the past few months Tessa has been developing a ‘by appointment’ Lontessa showroom in the ground floor of her home in Singapore. “There are so many stores in Singapore. Like on my street there’s like 50 shopping malls. There’s so much over-saturation and Singaporeans like something that’s intimate and personal.”

After NYFW, she returned home for Singapore Fashion Week where she held a show to launch the new showroom. She brought together a range of collections, including furs from the New York show and a collection she showed in Melbourne, based on Parihaka.

The show was held in a private club with about 70 people.

“We had a pop up on the day and we sold many looks fresh off the runway,” says Tessa, who then hosted several private appointments the following week.

She has another two fashion shows lined up in 2020 in London and Milan.

Tessa says her ideas come from taking stories she was brought up with “and then put them into sort of a modern context and seeing how it can relate to us in our life at the moment.”

Things she’s going through in her own life also have a bearing.

“Obviously with all the gowns that was because I was getting married. Sometimes ideas just get stuck in your head. I already know what I’m going to do for my next collection. It’s based on the Motunui and Manukorihi carvings. It’s like when you’re doing these journeys and finding out about yourself and interpreting the visual feelings that come from when you’re doing all this research.

How do I portray that and relate it to everyday life? And how I express myself?”

Her brand used to be Rauwhiro Bailey (her Maori name) “but it’s a lot harder for people to recognise and say and people just thought it was a Maori brand. I like the crossover with the cultures.” So she simply reversed her Anglicised name for her LONTESSA brand.

In her shows, her Maori heritage is always there, but it’s subtle.

“I don’t like to you know, copy and paste torus or use things obviously … I have some little hints of taniko designs but it’s not in-your-face — I’m more focussed on how we think about nature, and the world and how everything has a whakapapa … I try to stay away from the cliches.

“It’s like a holistic approach and where the fabrics come from, is it biodegradable? Having high quality materials that are sourced ethically. I use some eco fabrics as well  like Cupro which is made from cotton seed waste and it degrades like cotton and looks like silk.

“I don’t do massive productions … I like to make treasures that are more intimate and personal.”

Support from other New Zealand designers has been integral.

Tessa recalls one time when she and a couple of friends had to model when a fellow Maori designer, at last year’s Paris Fashion Week, as the show’s models didn’t turn up.

“You get this whanau support thing even when you’re overseas.”

When asked if she ever looks at her life and asks “how on earth did I get here?” she thinks words from her mum explain it best.

“My mum (Kelly Bailey — the Lont part of Tessa’s name is from her father) told me something really nice … when we had our wedding that was quite extravagant, we had like 350 people with tons and tons of flowers, and then a week after that we went down to our South Island property and had this three day birthday music festival for my husband, and my mum said: ‘You know when you were little, you used to daydream a lot. I used to find it so frustrating because you used to walk into doors and I was trying to snap you out of it and wake you up all the time, and now I understand that these dreams are fantastic and you’re making them alive for all of us.’

“So yeah, I think it all came about because I was a daydreamer,” she laughs, “to the frustration of my mother.”

Her greatest dream is to have her own table at the Met Ball dressing celebrities.

“I think I’d realise that I’d made it then. Having a whole table of celebrities wearing Lontessa at the Met Gala. Money is not my biggest motivation … it’s being able to create dreams and being able to help people express themselves and express myself, those are the things I like to really focus on.”