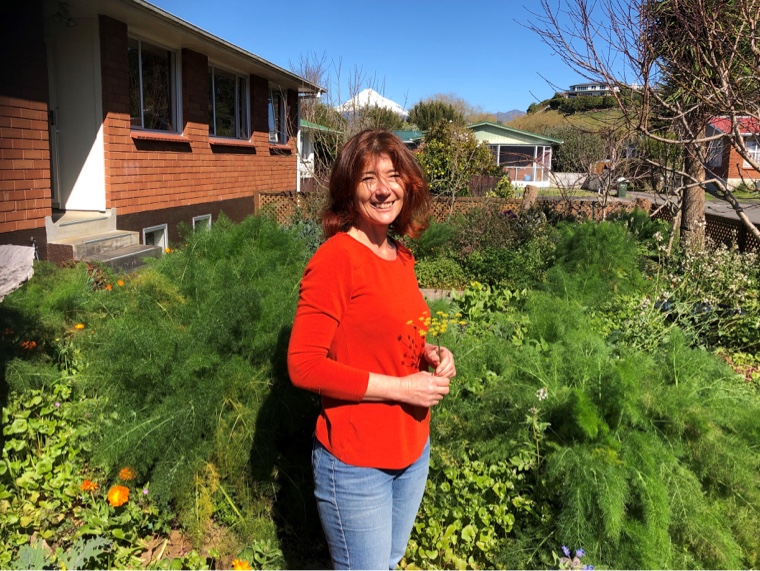 New Plymouth woman Miranda McDowell is keen to show people how easy it is to grow an abundance of food in an urban garden.

“It just does its own thing now, unless I want something in particular and have to pull something out and put it in,” she says.

But it’s her plentiful front yard people will see first when they visit the plant-loving woman, who has deep gardening roots.

Her father was Ian McDowell, a former curator of Pukekura Park and a man with extensive plant knowledge.

“He used to grow vegetables in the corner of Peringa Park and give them to all the neighbours,” says Miranda, who had her own veggie patch when she was a kid.

“I’m really interested in eating and if you grow food yourself it’s the best and then you get really fussy and it gets difficult.”

As well as her garden beginnings, she has learnt food production from organic horticulture and permaculture teacher Dee Turner, whose Korito property in Westown is part of the 33rd Taranaki Garden Festival, on from October 30 to November.

The backyards trail and the festival, along with the Taranaki Arts Trail, are collaborating with their events and are all in the same programme.

For her contribution to the spring event, Miranda wants to show people the ease of food production, beginning with setting up the infrastructure.

When the 550 metre-square property was transformed into an edible paradise in 2014, the front yard was divided into large squares, either side of the front path.

Frames were formed by lengths of macrocarpa and then cardboard was laid to cover the entire base of each space. The next layers were Return to Earth compost topped with wood mulch.

“And that’s it,” she says, advising people never to mix the mulch into the soil, but leave it on top like in a forest.

Standing on the path between the two food forests, Miranda points out copious amounts of miner’s lettuce, which comes up in winter and self-seeds.

Other edibles include raspberries, currants, strawberries, sprouting broccoli, kale, rocket, fennel for braising the bulbs, four different apple trees, Chilean guavas she loves to sprinkle on her breakfast, blueberries and… the list is long.

“Make the soil or environment as happy a place for the fungi, bacteria and all the little creatures, and they will look after things for you,” she says.

“Disease is an indication that something’s not right and weeds are indicators of what’s going on in the soil, like impaction or the pH is a bit off.”

Along with weeds, Miranda isn’t keen on grass growing in her food forests. “If I have everything mulched, the grass doesn’t germinate.”

Up front, she’s proud of a peach tree grown from a stone. Nearby, is a thriving Hawera plum and heading down the side of the house a deep raised garden produces kumara beneath a mountain pawpaw.

Past a pepino plant and a liquorice tree, she picks a fluffy leaf from a peppermint geranium and sniffs. “A lady told me you can make a chocolate cake and place them on a leaf and it infuses the peppermint.”

In the backyard, there is a feast of edibles and a small hothouse for capsicums, turmeric, aloe vera, stevia and tomatoes.

Flourishing in the open air are fig and almond trees, almonds, land cress, mulberries, Māori potatoes, feijoas, asparagus, a variety of mints, and herbs at the backdoor by the kitchen.

One of her treats is the tiny bounty of two cocktail kiwifruit plants — a male and a female.

“They are like little lumps of kiwifruit sugar. They don’t have hairs on them; you can eat the whole thing and they have the cute little kiwifruit insides,” she says.

“I think the earth just wants to be plentiful and you don’t have to do much for that to happen.”