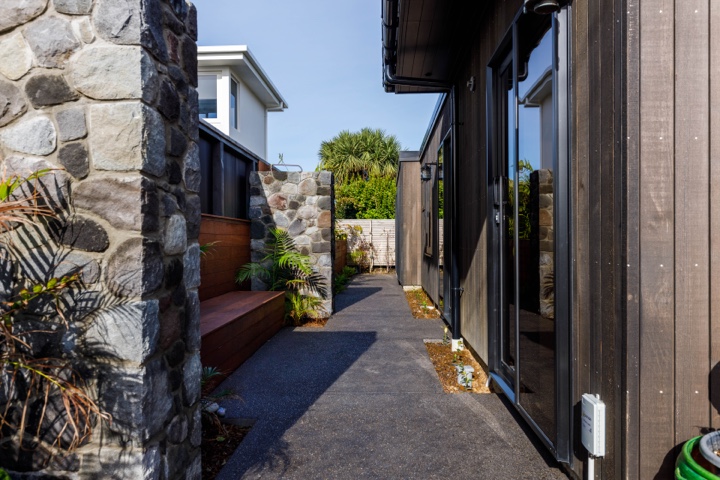 After several years helping other people declutter their homes and down-size, Dianne and Grant Dobson have just finished their own down-sizing project.

“Most people leave it too late,” says Dianne. “They leave doing it until they need to do it — maybe their partner has died, or maybe their own health has deteriorated — and then they don’t have the physical, or emotional, energy.”

“We’d lived on Hamblyn Street years ago and loved it,” says Dianne. “The street is so peaceful and quiet … the beach is across the road. I wanted to get back there.”

The couple strolled around and stood outside, looking at the tiny townhouse that had seen better days.

Already she had visions of what the place could be turned into.

The auction itself was hilarious, the couple recall.

Grant had just had his sinuses done and was a bit affected by the painkillers … at one stage accidentally bidding against his wife.

Then the final $67,000 went up in $1000 increments, between Dianne and one other remaining party, until they realised she was not going to give up.

Her Dad told her she had rocks in her head.

Her kids asked ‘what’s wrong with you mum … it’s like one minute’s walk from where you are now?’

Initially, Dianne and Grant chatted with home and landscape designer Mike Mansvelt, discussing what they were after and ideas they had. The house is on a cross-lease so they have had to keep the remodelled home to essentially the same 110m2 footprint that was there previously. The couple liked the roof and opted to retain that but pretty much everything else went.

They decided to model the house on a classic island bure design with a tropical theme inside and out.

“It fits beautifully with the seaside street we’re on.”

While the plans were being drawn and consent applied for, Dianne and Grant lived in the unimproved two-bedroom unit.

They contracted Foreshore Construction to do the build, owned by Dianne’s son Brad Dent and Andrew Tonks.

The family connection helped keep communication lines open and it was easy in the sense that if we had an issue, the builder was on-site, says Grant. Which is fortuitous, as the build happened during one of the most turbulent periods in recent construction history.

Demolition started in May 2021, with framing erected soon after.

“We were half-way through and we couldn’t get the cedar cladding — that took three months,” says Grant.

Then the complications set in.

With no cladding, weather was getting into the framing and parts were starting to be affected.

The fluctuating timeframe caused a constant juggle of rescheduling tradespeople and supplies.

“We had the same hang-ups that everybody building at that time had,” says Dianne. “It was hard work.”

People could name their price because there were no alternatives, the couple say.

“The cedar price went up at least three times, and this is just a little house … what the hell were people going through with big houses?” Dianne asks. “But you just have to be thankful that we’re here and we’ve finally done it.”

Meanwhile, they had sold their house on McLean St and their new home was nowhere near ready to move into.

“We were trying to clean out McLean St, work 100 hours a week and project manage the new build,” they recall, and they had nowhere to live.

It was right before Christmas last year and the couple had had enough.

“We jumped in the car and went ‘bush’ for three weeks,” says Dianne. They didn’t book anywhere or make any sort of timetable … they just drove. Their impromptu holiday ended up taking them round the North Island, catching up with friends and generally de-stressing.

When they came back they were invited to stay in a self-contained area of a neighbour’s home.

It was that holiday that cemented Grant’s thoughts that maybe it was time to leave his full-time job. With Dianne’s decluttering business going from strength to strength, they recognised he could be a big help there.

THE DESIGN AND DECOR

The new bure is designed to make the most of all day sun and views of the Tasman Sea.

The open plan living space takes up over half the footprint of the house — and that doesn’t include the large patio at the front.

Even the kitchen makes the most of the view, thanks to the glass panel in the top half of the wooden front door.

The roof has been recovered with tiles outside and wooden panelling on the inside, treated with a black stain with a red tint over top to give a deep chocolate brown effect.

The same coloured stain has been used to treat all the window frames, adding to the bure feel.

In the lounge, floor to ceiling wooden doors pull back to reveal Dianne’s workspace, plus storage shelves for about 20 glasses, some board games and other paraphernalia — all neatly stacked.

“When I go to people’s houses (to declutter them) I ask ‘How many glasses do you really need? Why have you got 200 glasses? You don’t need them.’”

“He’s laughing because I bought some more glasses today,” admits Dianne with a grin.

“We’ll never have to go to the garage and fossick in the freezer for meat again,” says Dianne. “That will last us out,” she reckons.

Even the kitchen island has wooden cupboards on the far side, housing vases, napkins, serviettes and precious china … the stuff you don’t use every day.

They have one light in the living area.

The master bedroom is just what you want a bedroom to be — quiet, peaceful and private.

The windows overlook the lush tropical garden, planted with orchids and a range of palms.

There’s also a spare bedroom and both feature floor-to-ceiling cupboards along one wall, concealing wardrobes and storage shelves. There are no chests of drawers cluttering the rooms.

Island stone tiles clad the walls of the master ensuite, including the shower, while the floor is done in Travertine.

A deep bath sits next to the concertina window, which folds back and is the next best thing to open air bathing. The high fence, garden, and newly installed shutters give privacy while Dianne luxuriates in lavender-scented bathwater with an ice-cold beer.

Dianne scanned the internet for inspiration when it came to the vanity, which Mode custom-made for her. In the drawer are several small cane baskets she has bought to keep contents sorted – a decluttering tip she often recommends to people.

The spare bedroom also has its own ensuite, while a single garage houses the laundry and provides internal access to the house.

The couple have made the most of their limited outdoor space, with every square inch considered in the landscape design.

An outdoor shower is located right outside the bathroom, down the private side of the house.

The built-in seats will have squabs, which Dianne is getting made using materials using marine quality fabrics.

“We used these materials at our old place and had the squabs for over 12 years … and it never ripped or faded. I don’t want to be bringing stuff in or out all the time.”

The entire property has been designed with an eye to the couple’s future, and they hope they get many years to enjoy it. They’re both pleased to have already taken care of the inevitable down-sizing and decluttering while they were still energetic enough to do it themselves.

Realising A Dream Through Helping Others

“I hear you’re the lady who sells s***,” stated the gruff voice over the phone.

So went one of the more memorable job offers for Dianne Dobson’s thriving decluttering business, Arrange With Style.

Just a few years later, everybody wants Dianne and she works 100 hours a week in her own business with 20 – 30 clients at any one time.

It all started from helping some friends transfer their parents into retirement villages and rest homes. Stuff the families were going to throw away or donate, Dianne salvaged and sold, giving the families a good return on items they thought wouldn’t be worth the hassle of trying to sell.

She realised there was increasing demand for what she could do, so she started a business to help others with down-sizing and decluttering.

“I get a commission for every item I sell,” she explains. “I don’t own the items – I sell on behalf.

“And I don’t need to get top dollar. It’s more about churning the stuff over and getting a quick result so the owners can move on.”

Dianne’s point of difference from other online vendors, is that generally she only sells luxury and good quality second-hand goods.

She has cleared chattels from two restaurants, sold cars, boats and end-of-line products.

Sometimes the customers are families whose parent has died, or needs to move into a rest home. The family members don’t have the time to dispose of everything, so they hire Dianne.

Other times the clients may be older people who want to down-size, or are moving into a retirement village. Sorting through a lifetime of memories can be overwhelming.

“The other problem they often have is that they aren’t tech-savvy,” says husband, Grant Dobson. “They simply don’t know how to list goods on TradeMe or whatever and don’t know where to go to get the best price for their goods.”

Dianne solves those problems and gives people a good return on products that will otherwise be dumped or given away.

“She is a capable, reliable, trustworthy, friendly and entertaining person,” says Grant “and they are getting harder and harder to find.”

“The part I love, that I’m addicted to, is that sales process,” says Dianne, “and helping people. I get excited seeing someone else get the benefit of a really good item, and then giving the proceeds to someone who just wanted the thing ‘gone’.

“I have tears in my eyes every day … there’s always something that makes you tear up. Every sale has a story.”

Not everyone who contacts Dianne is down-sizing … sometimes they just want to declutter, or need help to get their home functioning better and the rooms looking amazing.

“Sorting through a kitchen or home, cupboard by cupboard, cleaning and organising, I am in my absolute element,” says Dianne.

Once customers see what Di can do, the work snowballs.

“It’s ridiculous how it’s evolved,” says Grant. “Four or five years ago, it wasn’t even a happening thing. Now it’s been on the front page of the Daily News, on Seven Sharp and Radio New Zealand’s Nine to Noon programme.”

It’s all a far cry from how she was feeling just a few years ago when no-one wanted to hire her.

“I always had this dream that I would love to have an online business where I wake up in the morning and the orders are there. And now, that’s what I’m doing.”