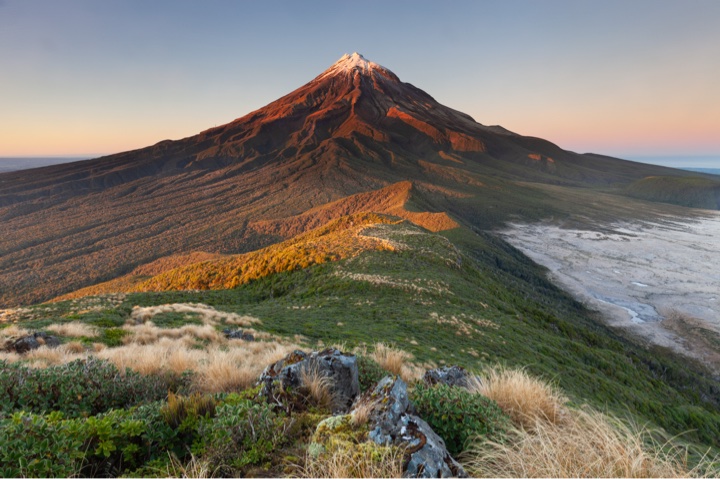 New Plymouth may be the current title-holder for most sunshine hours in New Zealand, but local man, Craig Jeffrey, knows it’s the wild weather people really want to see.

He’s the man behind Extreme Weather Taranaki, one of the region’s most successful independent Facebook pages with daily reports, photos and video of Taranaki weather.

Extreme Weather Taranaki has become a regular fixture for many locals, as well as ex-Taranakians living in other parts of New Zealand and the world.

Tornados, floods, slips, hailstorms and unusual cloud formations attract the most viewers, although everyone still loves a good sunrise or sunset.

The site didn’t come about through a conscious idea at all, admits Craig. “I didn’t even know how to use Facebook.”

In fact, it started as therapy.

“I suffered a near-death experience in 2007 when I was still working in the media,” says the now semi-retired Journalist/Writer.

A brain hemorrhage that year nearly killed him and effectively ended his career.

“I shouldn’t be alive.” Craig says.

It was the thought of his six children, he believes, that pulled him through.

He doesn’t like recalling the experience … “it was frightening”.

It was followed by a decade of poor health caused by the consequences of having a head injury.

“I had to live with it and there’s nothing you can do about it — that made me so, so angry.”

If life wasn’t tough enough, his partner of 20 years and mother of his children passed away three years ago, at the age of 51.

Finally Craig reached a point where he was sick of being sick and following a five year bout in the black hole of Depression, just had to pull himself out of it.

“I’ve always liked taking photos so I bought a camera in February 2018. The problem was, any kind of exertion getting anywhere, like walking up hills or anything that would accelerate my heart rate, would lead to vertigo, dizziness and fatigue, which in turn brought on terrible headaches.

“The same thing would prevent any length of time concentrating in front of a computer. My writing was terrible and everything was back to front, or in the wrong order.”

He also had to learn everything about social media and how it all worked.

“With my limitations, the task at that time, of even working out what I needed to do, was monumental, but I had to persevere and try to figure it all out.

“I’d managed to take three months worth of weather photos, but then had to work on what to do with them…I had no idea, but there was some nice ones in among them.”

With only 13 friends on a Facebook account created in 2010, it seemed pointless to put them there, as the account wasn’t active, but then this idea just popped into his head that he should create a weather page….and give it a name.

He had three important components that enabled him to see the idea through.

“I live right near Paritutu and of course we really get hit with some of the weather coming in off the sea.

“Having worked in the media and having very much enjoyed the weather reporting side of it, I had a base knowledge of what I needed to do to make it interesting.

“I also needed a computer that would do what was needed, so I got in hock for one of those and was basically sorted.

“Then I took a leaf out of my own book of advice that I’d always given my children… ‘Find what it is that you naturally do without even thinking about it and follow it…That’s where you’ll find your true vocation and you’ll be good at it.’”

Next was the matter of coming up with a name and Craig says the term ‘extreme’ immediately came to mind. Of course the title had to include ‘Taranaki’ and had to have an acronym that would roll off the tongue…EWT was born.

As he’d long forgotten how he’d set up his personal Facebook page, Craig watched a YouTube video about how to set up a new Facebook Home Page. It advised a group discussion page should also be set up, so both came into being and went live on 15th July 2018.

“There was no expectation of anything, except to post pictures and a few oddly structured words that could eventually be put in order.

“The idea was to talk about the weather in the same way, as you might, when chatting with the neighbour over the back fence. In short, a free community forum where budding photographers and interested people could display or discuss what was happening in their neck of the woods.”

But while Extreme Weather Taranaki’s Homepage did very slowly attract a few followers, the discussion page was basically mute and was pretty much forgotten about.

“There was absolutely no following, but that didn’t bother me. The page gave me a vehicle where I could practice writing, while the routine of getting out and taking photos gave structure to my days.

“I almost gave up at one stage because the concentration required was just too much and I ended up in hospital and used a walking stick for a time.”

Looking back at his long journey Craig now realises returning to work way too early did more damage than good.

“If they ever do, head injuries take an awful long time to come right,” he says.

“One report I once heard late at night on the old National Radio when I was sick was from a Senior Surgeon who had the same happen to her as happened to me. Her 8 year road to recovery gave me hope and I’ll never forget it.”

“I was still getting things back to front writing, so didn’t really want to do that, but there came a turning point in January 2019 where I either thought, or somehow got sent a message that ‘You’ve got to take this more seriously.’

“Instead of just throwing the alphabet at a picture, I began writing the reports like a news story like I’d read back in the 60/70’s.”

Craig’s writing got better and better and apart from a month away when his partner passed, up until the end of 2021, he had written weather reports for EWT every day.

“People are always interested in the weather and the local environment. It shouldn’t breed contempt or arguments or trolling, it’s just what people see. And after all, what does everybody talk about? The weather.

“Mt Taranaki and its ranges attract any incoming weather like a magnet and with our geographical location being on the western knob of the North Island, it means we are in the perfect position to watch and record the weather coming in off the ocean, or other events that may be working their way up, down or through the middle or west of the country.”

From Craig’s home in Moturoa, there are at least four lookouts within a relative stone’s throw that have a 360 degree view of what’s coming.

“There’s plenty of sites where people can express their opinion about the likes of climate change and weather manipulation, but we don’t broach those topics as I won’t have the inevitable arguments on my page.”

Whether that policy is reflected in EWT’s growth is unknown, but EWT has really only attracted a polite and interested audience, says Craig.

Up until November 2020 Extreme Weather Taranaki’s Discussion Group had grown to just 825 members.

“The only reason the page hadn’t been deleted, was I’d never got round to finding out how to do it when there were just 325 members,” Craig recalls.

Then Taranaki had four extreme weather events in a row.

“A week later southerly gales gusted over 100kph and then nine days on, it was back to heavy rain, floods and slips. A car was hit by a massive rock slide north of Urenui — it was lucky the people weren’t injured or killed — and someone took a photo of it and shared it on the EWT page.

“All of a sudden I’m getting all these notifications and the numbers just went ballistic.”

Contributions of photos and videos have snowballed, especially when there is severe weather.

EWT has full citizen coverage right around Taranaki with people keeping each other up-to-date and informed in real time with what is happening with Taranaki’s weather.

“It’s been an organic growth … it hasn’t been a grand plan or anything like it. It’s been an evolution and we’ll see where it goes,” reckons Craig.

His interest in the weather started when he was a child in Levin in 1968 when the Wahine ran aground. His family subsequently moved to Wellington in 1969 and overlooked the wreck for the next 2 years.

He confesses he would love to have been a storm-chaser, enjoys watching those shows and how they are put together.

“It would be pretty cool to have the equipment to go live and all that, but as EWT is not profit driven, that is unlikely.”

The freakiest weather experience he’s had was probably a storm from June 2018 that he filmed from his back porch.

“It was used on stuff.co.nz and received over 170,000 views in a day, but that was just before EWT started.”

He also recalls a hail storm in New Plymouth in 2013 that lasted half an hour and that video showed deep hail along the streets of New Plymouth and the local coastline.

EYES ON THE SKIES

Coming up with a suitable sign-off statement for each day’s report wasn’t as simple as may be thought, says Craig.

“Firstly, it needed to reflect what we’re actually doing.

“Second, It had to be easily remembered and become synonymous with EWT.

“Third, it had to reflect an intrigue that there are more interesting things going on if you look up and record it with your phone – and encourage people to do it – rather than to be continually looking down at it.

“Four, as what we are doing is monitoring what is happening in the sky above us, it’s not only extreme weather events that people see. The Starlink Satellites have caught people’s attention, along with anomalies that might be questioned or seen.

“We also have astronomical occurrences that come into play from time to time like the meteorite that seemed to crash into the sea off the coast of New Plymouth in May 2021.

“I’d like to think ‘Eyes on the Skies’ also conveys a sense that your gaze is upward and that it is ad infinitum… like the Universe, never ending …You just never know what you might see. It’s good for the soul.”

Most people reached in one week: 699,077 (last week of Jan 2020) – EWT’s coverage of the Australian bushfires and subsequent rain that helped extinguish them, was picked up globally

EWT also has a ‘reach’ right around the world with followers from 45 countries represented. The top 5 are NZ, Australia, The UK, The US and South Africa.