How Covid Helped Realise a Dream 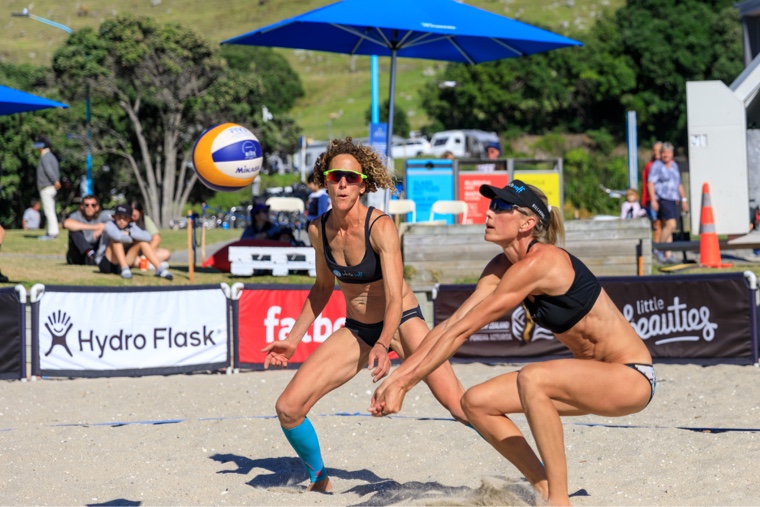 It was a surprise to everyone when the oldest team on the NZ Beach Volleyball circuit won the women’s section of the national tour — not least of all the two winners who had a combined age of 82.

Taranaki’s Micah Lindsay-Brown and Susan Imhasly were not only the oldest competitors, but they were also some of the smallest — modest in stature and slight.

“We weren’t going to win with power,” says Micah from her New Plymouth home a week after the win. “We had to make sure we’re really good at communicating where the space is and using shots and tough serves, rather than just belting the ball at people.”

The five events that make up the New Zealand tour were held all over the country, with most of the top competitors in their twenties. The teams making the play-offs were generally those trying to qualify for the Olympics.

“Working full-time and managing a family … to compete with those people, I feel pretty chuffed about that,” says Micah.

Susan has two teenagers and she works as a consultant for energy efficient homes and acoustics, as well as being a felt artist.

“It was an awesome feeling to get rewarded for our hard work,” she says of the championship victory.

This summer was the first time Susan and Micah had played a full season together.

The first event was in Nelson, where they came third and qualified for the second event in Christchurch, with the competition held in Cathedral Square with a specially set-up beach arena.

“It was really cool because the usual people that come and watch are people that hang out at the beach or are interested in volleyball,” says Micah. “All of a sudden you had road workers and builders and office workers who were loving it and getting into the atmosphere with this beach and music in the middle of the city.”

The pair notched up another third and realised that if they kept making the semi-finals, they had a chance to win the tour.

“We recognised there was probably never going to be another time that we would get an opportunity to win this trophy,” Micah recalls. “The stars had aligned that there were some big teams that couldn’t come over (because of COVID), and some of the teams beating us in the first round didn’t do well in the second round, so we decided to go for it.”

Usually, international teams would come and do the New Zealand tour as part of their preparation for the Olympics. For example, one of the names on the trophy was from the gold-medal-winning team at the 2016 Olympics.

Micah and Susan played the third event at Ruakaka, then Mount Maunganui for the last two competitions.

By the time of the last competition, the pressure was off a bit as they only had to come 5th to be crowned tour champions as they had so many more points than the next teams.

“But we got third,” says Micah. For the fifth time.

“The icing on the cake would have been to have a first. I wanted to win at least one of the competitions.”

Micah wasn’t even planning to play on the tour this season.

She and husband Greg had travelled the world in their twenties, playing volleyball and representing New Zealand for about seven years. But at 39, she had pretty much retired from the sport.

Instead she was training for a 10km road race and injured herself.

“I can’t believe it, because I tell everyone not to precede a big event with lots of concrete running, and to do certain steps and slowly progress before you get to that point, and for some reason I thought I was immune to that rule,” says the personal trainer.

She pulled a hamstring and a calf muscle, and couldn’t run without pain, but could still move about on sand, as it is more forgiving.

So when Susan asked Micah to be her partner for a couple of events at the start of the New Zealand tour, Micah agreed.

Susan is relatively new to the game, having taken it up at the age of 38, just five years ago.

She played indoor volleyball at school for three years but a bad knee injury put paid to that.

“My kids started with beach volleyball at school and Anthony Joe, the Spotswood college trainer, invited me along to his trainings. That’s when I started to soak up all the information and got addicted to the sport.”

She and Micah met at the gym.

Micah asked about an exercise Susan’s husband Lubos was doing on the bosu, and then on another visit, Micah’s husband Greg was wearing a Swiss world tour beach volleyball singlet, and Lubos got talking to him as he and Susan are from Switzerland.

The two couples became friends and started playing some social volleyball together.

The Imhaslys fell in love with the sport and made a volleyball court at their home in Oakura, playing volleyball every fine day that they could.

“It’s challenging sometimes when we have a run of bad, windy weather for a long period,” says Susan. “It would be very helpful to have facilities in New Plymouth where we could just go and play instead of spending a portion of our time setting a net up and taking it down.”

“It would be great if this could happen in the proposed new multi-sport facility,” adds Micah.

When the pair decided to train together for competition, Susan made training really easy, says Micah. “The net was always set up and she sorted training partners. She’s incredibly competitive and over a couple of years she just got better and better and became like a sponge, taking everything on.”

Neither of them had any expectations of representing New Zealand or trying to get to the Olympics or Commonwealth Games, “so it was really enjoyable and quite a free way to play.”

“I love the competition,” says Susan of her chosen sport. “Just being two people on the court, playing outside in beautiful locations and also because the weather is different each day we have to adapt our play to make the most of the wind and the sun. I also enjoy that it is a game which requires a certain level of fitness, reaction, tactics, good team work and that it isn’t a contact sport. But I think most I enjoy working on something and then putting it into practice in a game and being successful with it.”

Each day of playing during the New Zealand tour, the energy output can be more than that needed to run a half marathon. Making the semis meant Micah and Susan were jumping all day Saturday and all day Sunday at the five events.

“We had a couple of secret weapons,” says Micah. “I think Greg coaching us really made a difference. Identifying key areas we had to improve to beat certain teams with limited training time. Plus playing against men also helped as there are not a lot of other women to train with here in Taranaki.”

The pair are also fanatical about healthy eating and performance nutrition.

“We both belong to an organic co-op where we can purchase amazing organic food. I know that is a big advantage we had over other teams as managing your energy over a two day tournament can be tough.”

Micah remembers trying to compete a couple of years ago, when she was still breast-feeding her son Lochie and her then toddler Eden would call out from the sideline “Muuuummm!’

“I’m trying to play volleyball and you can hear these like whinging kids on the sideline,” she laughs. “Greg would have to haul them away and miss out on watching the game. Now they’re older, they love the beach and I’m not so distracted.”

In fact, daughter Eden was so chuffed with her mum’s success, she asked to take the trophy to school for her news.

“She was so proud that she held the trophy in the car all the way home. I always thought that she didn’t really notice when I was playing. After a couple of games she came up to me and said, ‘Good game mum’. It was like a moment in time had shifted her belief in what was possible. She’s the art/craft girl, she’s not the typical sports girl. But since the win I’ll get up and she’s got her jogging shoes on and wants to go for a run with me. I thought if nothing else, at least I’ve been a good role model for my daughter. That was really cool.”

New Zealand women’s volleyball is so much stronger now than it has ever been, Micah comments.

“I look back to my 20s, when I was winning tournaments and in my prime, and I’m probably better now than I was back then,” she says. “These days, the overall standard, particularly of the top five or six teams, is so much better. Even some of the losses we were playing high level volleyball and I felt really fit.”

As for defending their title next summer, they haven’t committed one way or the other yet.

Susan is off to Switzerland shortly to compete in the beach volleyball season there.

“And I really enjoyed it.”