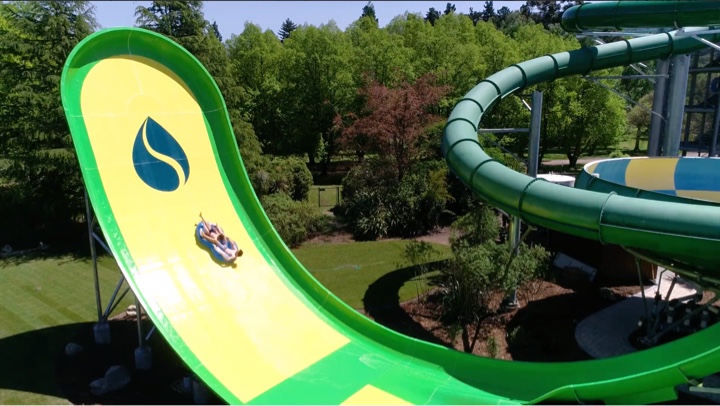 As I’m writing this, I can hear various birds tweeting and insects chirping and a light babbling from the stream that runs through the bottom of our garden. The sun is shining and about three sections away, someone is using a chainsaw that sounds like it is in desperate need of a sharpen. In the kitchen, I can hear Lorna concocting a gin cocktail of some sort to celebrate her birthday. In other words, all is currently right with the world.

This situation is in stark contrast to just over a week ago when I was standing at the top of a tall steel structure, soaking wet in pouring rain, wearing just a pair of shorts with nothing but an inflatable raft for transport back down to ground level and a very excited teenager alongside me for company.

“This is the tallest hydroslide in the country Dad!” she said excitedly. Clearly, this means that I am at the peak of my stupidity.

Hydroslides generally aren’t my favourite thing, probably due to the speed and lack of control, but Maddy wanted to go on the two big slides at Hanmer Springs which meant that she needed someone to go with her; plus I’d paid a lot of money for us to be there, so I kind of had to really.

The first slide was huge and very fast right from the start and I’m quite happy to say that it scared the crap out of me, especially when we exited a tube and started spinning around a huge yellow and blue bowl.

“Haha, this is just like a toilet!” squealed Maddy. Thankfully, I managed to turn us around, as I wasn’t quite ready to be flushed backwards on my first go.

We managed to get out of the toilet slide unscathed, but I was immediately exhausted and entered a kind of “limp home” mode as I pointed us towards the nearest hot pool.

Aunty Kim took over the hydroslide buddy duties while I made my way back to the rest of the family. When they came back after tackling the other hydroslide called Conical Thrill, I had recovered enough to ask, “How was it?”

“It was awesome!” replied Maddy, “but we didn’t go up very high on the last bit because Aunty Kim is too light. I think I need someone heavier to come with me, so we can really get some speed up and maybe even hit the top,” eyeing my 6’5” post-Christmas Dad-bod with some meaning.

It may be something to do with age and the deterioration of my hearing, or maybe the words “get some speed up” triggered a primordial adrenaline switch deep in the confines of my brain that clouded the short-term memory of my experience of the first slide.

Or maybe I was so impressed with Maddy realising that more weight in the back was the key to greater speed but I found myself saying something like, “Come on then Maddy, let’s go.”

Madeline’s eyes lit up and we were off.

Once again I found myself standing a long way off the ground, my stomach in my throat, surrounded by other half-naked lunatics, looking down into the dark abyss of a giant fibreglass tube.

I was doing my best to ignore the voice in my head that was telling me that I was too old to be doing this, instead telling myself that I was being a good Dad, because these hydroslides required two people to ride and if I didn’t volunteer to go along, Madeline would be missing out.

Well, we outdid Aunty Kim’s paltry efforts and arrived at the bottom in a splash of chlorinated water.

“If we got up a bit more speed and you sat further back, I reckon we could get even higher next time,” voiced my budding scientist/mathematician.

“You know what Maddy?” I replied, apparently fully recovered from any previous trauma, “I reckon you’re right.”

The competition was on.