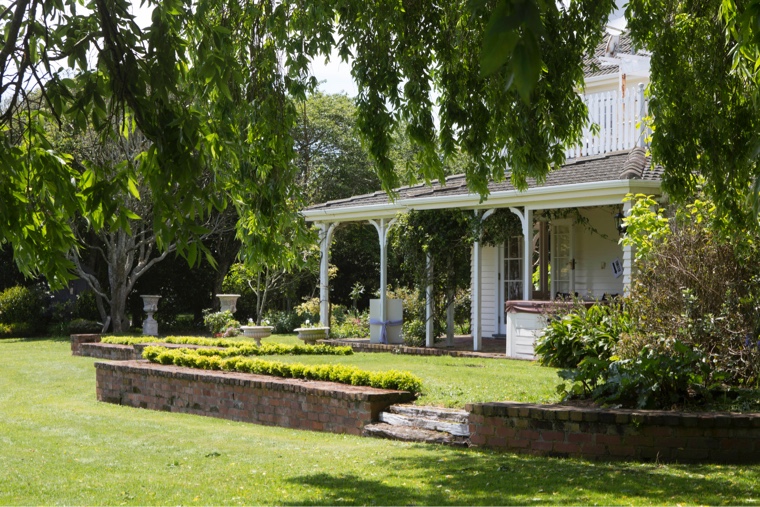 Chris and Steak Goodin will be celebrating a milestone when they open their Okato property for this year’s Taranaki Garden Festival.

The Goodin Country Garden will be featuring for the 10th time in the region’s showcase of beautiful gardens.

“We just missed 2014 because of Steak’s stroke that August,” Christine remembers, “but we were still in the programme and many folks still turned up.”

In August the following year, Steak received a QSM for his services to the Life Education Trust and work with troubled youth and that same week he watched Kawi, the horse he bred, win the $200,000 Makfi Challenge Stakes at Hastings.

For the festival, on from October 30 to November 8, you’ll find Steak in a tent at the gate, greeting everyone with a huge smile and waylaying men to watch sport on TV.

Horse-loving visitors to the Goodin Country Garden can wander through the expansive gardens to see the New Zealand champion galloper happy in his retirement paddock.

Chris agrees. “It’s all about the people, more than the garden… the old school friends who turn up, the true gardeners and the people who love our rocks. It’s amazing how many racing people turn up, mostly to see Kawi.”

Over the years, the Goodins have had “artists in residence” for the 10-day festival, which has excited Chris. She names corrugated iron sculptor Jeff Thomson, garden-scape painter Karl Maughan and botanical watercolour artist Nancy Tichborne among the highlights.

For the first time, the festival has partnered with the Taranaki Arts Trail, on from October 30 to November 1. That means people can visit a garden and then see art in galleries and open studios around the region.

Instead of art, this year, the star attraction — alongside Kawi — is a small flock of “smiling sheep”. Bred by son Luke, one of the six Goodin children, these woolly creatures are perfect for lifestylers, and vineyards, because they only chew up to 600mm and take all the low growth off grapevines.

“They are inquisitive and lovely natured,” Chris says. “People can come in and play with them — they are kid friendly.”

In lockdown, the couple’s focus was on feathered visitors.

During those quiet weeks, the numbers of tui and kereru doubled. “One day I counted eight tui on my Mimosa,” she says of the prunus, bred by Tikorangi plantsman Felix Jury and named after his wife.

“It was lovely to garden and stay in your garden clothes and know no-one was turning up.”

Chris also did some hard labour. “I shifted a whole truckload of mulch taller than me. Every day I would go out there. I was able to mulch the whole back of the garden, which I have not been able to do. That was great exercise.”

There are two other major elements to the Goodin garden — the huge rocks dotted around the property and the plantings for daughter Nicci, a well-known New Plymouth florist.

But if Nicci is stuck, or needs a particular rose for a wedding in the summer, she heads for her parents’ home.

In spring, the florist seeks cherry blossoms. “She will take branches of that and use them in her corporate work,” Chris says.

But a bit of push-and-pull goes on over the cherries. “She (Nicci) will say ‘no, I can’t take this, you’ve got a wedding on Saturday, or the festival’. I’m the one who says, ‘you can take them — no one’s going to notice in the scheme of things’.”

Beneath trees, among flowers and in a special enclosure are lichen-covered rocks, which are magnets to children, who love to clamber over them.

Even adults are intrigued by them and often have advice for Chris on how to make best use of them.

“The rocks became part of the garden,” she says. “They were already there — I think they came out of the mountain.”

The Goodin Country Garden is set in stone.