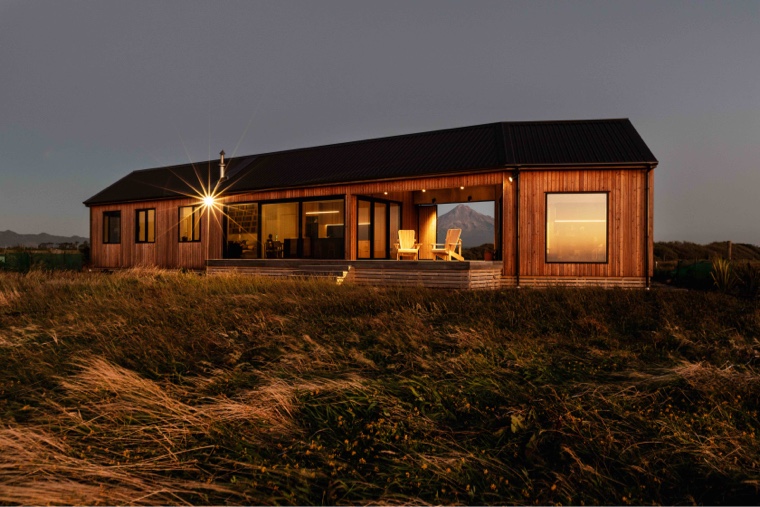 From the acquisition of the land, to discovering their architects, tradesmen and furniture, this construction tale is one of true serendipity that evolved into a French-Canadian couple’s beachside dream home on the rural Taranaki coastline.

Having arrived in Taranaki from Montreal with an idea of purchasing a multi-unit or home-and-income style building, Matthieu Rodrigue and Maria Laitenberger soon discovered that such properties weren’t as common for first-home buyers in New Zealand, as they were back home.

Fortunately, an afternoon encounter while on a tour of Coastal Taranaki opened their hearts and minds to an opportunity they had never dreamed of.

“The section wasn’t listed anywhere, we just saw an ad by the road that looked like it had been there a while. We drove to the end of the road hoping to figure out who we needed to talk to, but had no luck, so we turned around and headed back to Highway 45,” says Matthieu.

After passing a car on the way back to the main drag they felt a strong impulse to turn around and follow them.

“They happened to be the people we needed to talk to. So if that encounter didn’t happen, we wouldn’t be where we are today.”

From that point on, the outdoor-loving couple’s dream seemed to fall into place.

Alongside architects Emily Batchelor and Murali Bhaskar of BOON (who they also met through separate chance encounters), Maria and Matthieu set off on a journey to design something small, simple and clever, on a very modest budget.

What they achieved together, along with Gareth Shearman from The Makers, BTW, and Garden Solutions Taranaki, is a true reflection of an ambitious client with meticulous planning, and a drive to be thoughtful and resourceful.

The collective effort was a major contributor to the home winning a Western Architecture Award at the 2021 New Zealand Institute of Architects Awards.

As self-confessed detail-orientated people, the couple provided project architect, Emily, with “the biggest brief she’s ever seen”, featuring a table of contents, design preferences, small quirks, and anecdotes that described the way they wanted to live.

“It was amazing and it gave us a great starting point to design from,” says Emily.

“The design was very humble, but sophisticated and achievable. Part of the secret of this build was keeping it simple.”

“There is certainly detail in the design, but overall, right from the start, the strategy was to keep the form simple, and keep to the budget.”

Maria says they wanted a home that provided flexible, multi-purpose living that maximised space, minimised waste, and would evolve as their family grew and style of living changed.

With larch exterior cladding, pile foundations and a subtly contorted gable form, the 110 sqm relocatable home responds beautifully to the conditions of its landscape through texture, durability and colour.

It’s long, narrow orientation is positioned perfectly for solar gain, while screen features can be altered to both expose for ventilation, or close for shade, depending on the time of year and natural elements at play.

A roofed passage, or breezeway, separates the main house from a self-contained guest space, and also offers an additional living area for lounging, dining, or simply enjoying the framed view of Mount Taranaki from one side, and the picturesque coastal breaks from the other.

The living areas and much of the furniture have been carefully designed with multi-purpose functionality in mind, says Matthieu.

“Our dining table aligns with the kitchen island bench for everyday use, but it can also be detached and moved to a different space. Our work desks were also designed to fit the dining table if we need more table space for entertaining.”

The open nature of the home also inspired innovative thinking when it came to concealing certain features.

“We wanted to camouflage our bath which is situated between the main bedroom and living area, so we purchased a swivel tap and had some oak panels made to cover it so it just looks and acts like a bench that we use for folding laundry or general living. It has become a useful, multifunctional space,” says Maria.

The couple also imported a net from France, which was installed as a mezzanine in the guest quarters and acts as both a safety mechanism, and additional living space.

“We realised that instead of having a balustrade, or a full floor, a net would serve as that protection and also keep the height and small floor footprint we were looking for. This has become our cinema room, where we lay and watch TV, play video games, or just relax.”

The net adds approximately a quarter more space to the 22 sqm room that is accessible by an alternate-step, oak staircase and trap door, carefully handcrafted by Ōkato furniture maker, Ben Lilley.

What is perhaps a privacy-seeking teenager’s dream bedroom, or inspiring office setting, is also proving a popular retreat for guests who stop to relax and enjoy the rugged coastal outlook.

The inviting and relaxed coastal home also features an oak entertainment unit, custom-built by Lilley, and an Ethos Phoenix fire from 4 Seasons, which offers a draft-free solution for homes located in high-wind areas.

Maria and Matthieu’s environmental ethos inspired many of their decisions throughout the design process, including the installation of a Biolytix worm-based septic system, of which the grey water is used for the garden, long-run roofing for rainwater collection, and a solar panel set-up that will allow them to go completely off-grid when the time comes.

Hours of time spent researching TradeMe and foraging op shops means the majority of their furniture has also been purchased with a circular economy in mind. Their wall art, bed, lounge suites, outdoor furniture and pot plants were all sourced and repurposed by the pair.

“When we sold our stuff in Canada it made us realise that we should never buy new again,” says Maria.

“It took some time, but bit-by-bit we were able to build it out. There’s some amazing stuff out there if you go looking for it.”

Having been in their home for just over a year, the couple say they are incredibly grateful of the journey they have been on, and those who joined them along the way.

“We worked with the best team. Being supported by great people made it easier for us to do this. We really wanted to show that you don’t have to build big to build something. By aligning with the right people you can create something that will blow your mind and not your budget,” says Matthieu.

And when they wake up in the morning, they still can’t believe this is where they have ended up after making the decision to move to New Zealand six years ago.

“It has been a dream come true for us. We’re still amazed by every sunset, sunrise, snow on the mountain, even the wind. To have turned around on that day and asked the people in that car, is quite extraordinary. We are still finding ways to appreciate it every day.” ••