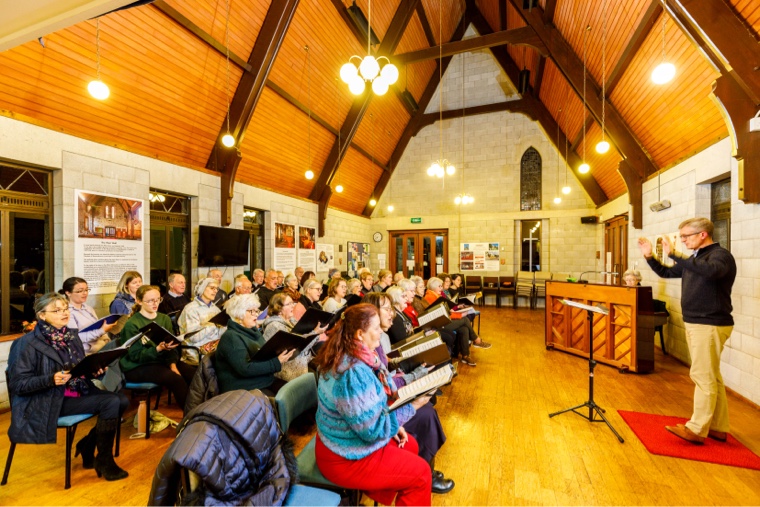 New Plymouth’s Ars Nova Choir is celebrating its golden anniversary in the way it knows best – by singing.

The choir will raise the roof of St Andrew’s Presbyterian Church on August 21 for the world premiere of the musical composition, conducted by Christopher Luke and accompanied by chamber orchestra Ars Antiqua.

Looking back over those 50 years, Meryn and four other members share tales about soaring sounds, teamwork and the power of voice.

“At it’s best, it’s like getting a gold at the Olympics,” says bass Clyde Wilks, who joined Ars Nova in 1982.

It’s all about team spirit for baritone John Barrell, who joined in 1985. “There’s no way you would come to the concert if I was the soloist. But people with ordinary voices can make a wonderful sound.”

The solidarity of a choir is also a highlight for baritone Ian Gabites, who became a member in 1986. “You know when the voices are matching, and the collective is working well because the acoustics go ping.”

Claire Purdy, a soprano, joined two years later and is the longest-serving continuous member of the choir, which usually performs with about 50 singers.

She has worked with many soloists, accompanists and conductors, placing great importance on the latter.

The main conductors for Ars Nova have been, in order, Trevor Gibbs, Harry Brown, Allan Purdy, Pauline Atkinson-Rigby, Adam Jasinski and Christopher Luke.
“It’s up to the conductor to get it out of us,” Claire says.

“Every person builds on the work of their predecessor,” Ian adds.

Soloists have often been up-and-coming performers, like Bryony Williams, but the choir has also been graced a dozen times by seasoned bass and baritone Roger Wilson, who is the Ars Nova patron and several times by soprano Dame Malvina Major.

“She did Messiah (by Handel) with us in 1984 in the New Plymouth Opera House. It was full – that was our biggest crowd,” Claire says.

“She is a very gracious lady and a gorgeous singer,” John adds.

One of the most regular accompanists has been Amanda Henry on piano, but there have been surprising guests, as seen in a concert at New Plymouth Boys’ High School in 1982.

Clyde has also enjoyed going out of Taranaki to join forces with other choral groups.

“In those early ‘90s, we did a series of concerts with choirs in other cities, and we did some huge works,” he says, naming St Matthew Passion by Bach, Elijah by Mendelssohn and Messiah by Handel.

Clyde says the choir performs compositions spanning from the 15th to the 21st century.

“We sing sublime music,” he says.

“I don’t have a religious bone in my body, but a lot of what we sing has religiosity,” she says. “It’s got to do with the music – it’s soul.”

The power of voice was demonstrated in the choir’s two performances of The Armed Man – A Mass For Peace by Karl Jenkins and conducted by Adam Jasinski.

“There’s one part where the bombs are getting dropped on Hiroshima, and we started at a low pitch and finished with a scream,” John says. “Everybody built up to that scream – boy that was a powerful moment, it set the heart racing.”