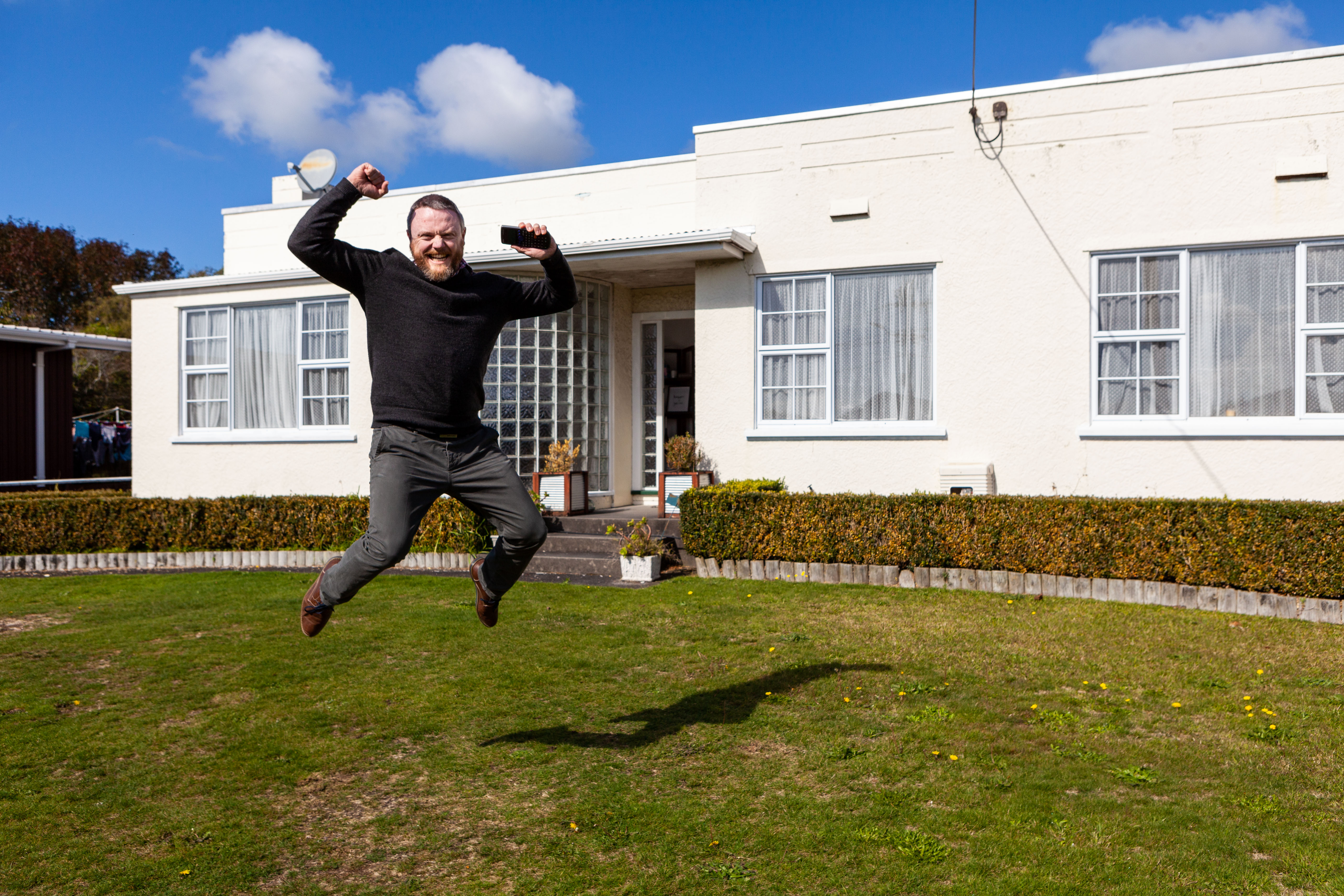 Smashing the mortgage seems like an elusive dream when you’re handed the keys to your first home. But some New Plymouth buyers are getting themselves mortgage-free by 40. Michelle Robinson speaks to four young homeowners to find out how.

Lew Sarten celebrated his 30th birthday with no mortgage on his home.

The architectural draftsman bought his first home at 23. He had already saved the $35,000 deposit during three years of working.

He bought the house next door to his grandparents, just a few doors from where he grew up in the New Plymouth suburb of Welbourn.

“One of my earliest thoughts about property was ‘all you’ve got to do is buy a house and people will pay you to live in it’. It seemed like a good idea, I was in high school at the time and knew nothing about property investment.”

Lew borrowed $215,000 to purchase his home which he lived in with flatmates for three years and added a fourth bedroom.

“It was a few years of hard slog,” he says. “I’m naturally frugal by nature.”

It might come as a surprise that young buyers are as enthused over smashed mortgage debt as they are about smashed avocado brunches.

“Young people are very savvy in trying to secure something for themselves now,” Harcourts Bell Block agent Glenn Green agrees.

“There are a lot of brave young people who are driven to do good.”

Selling his house into a company he created and renting it out, Lew bought and moved into his second home in Vogeltown.

Again he had the help of flatmates to boost his repayments for the $465,000 property over three years.

“I’m a big fan of keeping your eyes on the prize and doing what’s necessary to achieve it. In saying that, if I wanted to go away for a weekend, I’d go. If I wanted a new camera, I’d buy it,” Lew says.

“I’d choose something like that over a typical night out on the town as a young person. I’d still have a coffee but be mindful of the frequency and how much I was spending.”

He sold the second property into his company, renting it out as well. He then bought his third home in Welbourn, a little railway house for $231,000.

“By the time I moved in, I was essentially mortgage free on that home.”

That was just seven years after taking out his initial mortgage.

The typical age of first home buyers is 31 to 33, according to Australian real estate figures.

A lending crack down by banks along with rising property prices means it can take Kiwis years to meet standard 10 percent deposit requirements and build their nests.

New Zealand homes are about six times the average household income today, and three times what they were in 1965.

The average house price in New Plymouth was $458,000 in February, up four percent from last year.

Yet New Plymouth real estate agents are noticing people in their mid to late 20s bucking the trend and buying young.

Realising the unlikelihood of a pension still existing when they retire, young people are realising they need to start early to prepare for the future, real estate agent Glenn Green says.

“Young buyers are very humble in what they’re looking for, two-bedroom properties and do-ups.

“A lot are finding it so handy to have a flatmate.”

*Sam Waters thought he could either pay board in a flat with his mates, or they could help him pay his own mortgage.

Seizing his opportunity, Sam got the keys to his first home in his 20s in suburban New Plymouth.

He made use of floating rates to dump extra from his pay packet onto the mortgage at times, keeping the interest down.

While still in his 30s he will have paid off his family home entirely, having held a mortgage for just 10 years.

“It was always a goal of mine,” he says. “I wanted to pay it off as quickly as possible because I don’t like having any debt.

“It means my family has extra money each month which gives us the ability to save for the children’s education and afford holidays. It then gives us the possibility to look at either a second house or a better dream home.”

Another couple spoken to by Live paid off the mortgage on their lifestyle property in under 10 years.

Clara Bunting* and her husband went mortgage free on their lifestyle property in less than nine years of living in their spacious villa.

Clara, 41, is quick to downplay their success. “Basically I have a well-paid job and my husband, a stay at home dad, is quite handy and has done a lot of the renovation work required on the house.”

The ability to economise and retain modest expectations over cars, holidays and other interests has helped, Clara says.

So too was the decision to buy in Inglewood, where houses are more affordable than their New Plymouth equivalents.

“This is where we had to come to get what we wanted for what we were prepared to pay. We’ve been here eight and a half years.”

It pays to buy young, while you’re earning well.

The best age to grab that first rung of the property ladder is before 25, financial coach Hannah McQueen says.

The best time to become financially literate is during high school, the EnableMe founder says.

If you’re buying in Taranaki, the odds are already in your favour to sink that mortgage early.

“The median house is just over five times the median income, which compares very well to other regions,” Hannah says. “Prices are still achievable and incomes are fairly high.

“For our Taranaki clients, 10 is the new 30. Which means you save about the size of the mortgage itself in interest – and that’s a powerful motivator.”

Most EnableMe clients begin with a mortgage length of 24 years which can get whittled down to 10 years when a plan is in place, Hannah says.

Young people are motivated to do this to save themselves money, to futureproof and to provide opportunities for their families, she says. “The world’s their oyster.”

Interest rates have been at a low four to five percent for several years and are only set to increase.

If you would struggle to meet mortgage repayments now, think again before buying and certainly think twice about your mortgage length.

“The total interest you pay on a 30-year mortgage is a lot of money,” ANZ mobile mortgage manager Duane Cameron says, speaking independently.

Some of his clients take out home loans for just 15 years, with repayments costing $2000 a fortnight.

Not everyone can afford that, but once first home buyers are made aware of what they could save over time, plenty opt for a 25-year mortgage over 30 years.

Duane deals frequently with young buyers keen to save themselves interest. One standout example is a 26-year-old with three New Plymouth rental properties.

Duane’s advice, and the advice from others spoken to for this article, is that being quick to repay as much as you can in those early years makes a tonne of difference in the amount of interest you save.

Some factors in young property owners’ favour are that asset gifts are free from tax, meaning it’s become easier for parents who wish to gift money towards their child’s home deposit.

Another way is to be a guarantor and use the home estate as security for their child’s property purchase.

Many young people are happy to strike out on their own, Glenn Green says. “We see a lot of first home buyers from age 23 who are buying on their own.

“They’re going down their own path and living by themselves. They’ve gone away to uni, done their OE or pursued sport and are back and ready to settle.”

Among those who have left and returned to buy is Tara Williams* and her husband Reece.

There was enough money left from selling their Auckland house to buy a home for $638,000 in New Plymouth, with a little help from Tara’s parents. There was no mortgage required.

They will have paid off the debt to her parents within five years, after completing some renovations.

“This meant my husband was able to start and run his own business while I do full time hours in a job I enjoy, with flexible hours,” Tara says.

“We are able to be at home with the kids and don’t both need to work full time.”

The couple will be in their early 40s when they become debt free on their home.

“We had always wanted to achieve this but never thought it would be possible this early.”

This writer can celebrate a similar milestone of going mortgage-free on her home while in her 30s.

My husband and I used the value of an Auckland investment property to offset the debt in our New Plymouth home, meaning our home is now mortgage-free.

In Lew’s case, he was able to use his assets as security to borrow again each time, sometimes not requiring a deposit.

Selling each existing property to his company released equity from his assets and offset debt. Putting the properties into a company also gave him tax advantages.

Keeping the properties rather than selling them, even with mortgages on some, meant Lew could gain five to seven percent worth of interest on his assets, plus capital growth.

That’s opposed to earning say, two percent interest if he put his money in the bank, he says.

It means that over time Lew’s likely to gain more wealth than if he had kept one property or left his savings in the bank.

It’s a risk and Lew strongly recommends seeking good legal and accounting advice before making any decisions on property.

“Build good relationships with these experts,” is his biggest advice.